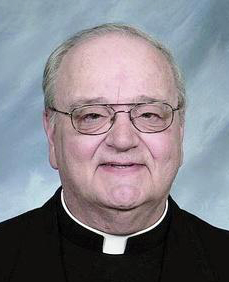 He was ordained May 18, 1974 by Cardinal John Krol at the Cathedral of SS. Peter and Paul. His first assignment was as parochial vicar at St. Madeline Parish, Ridley Park. He also served as parochial vicar at Immaculate Conception Parish, Levittown and assistant chancellor for the Archdiocese of Philadelphia.

Msgr. Francis Depman, the pastor of nearby St. Rocco Parish in Avondale, recalls Msgr. Graf all the back to seminary days but most importantly when he started in Hispanic ministry at Mision Santa Maria de Dios in that area of Chester County. He lived at Assumption Rectory with Msgr. Graf.

“He was a really good, caring priest,” Msgr. Depman said. “He was pastorally involved with the people and very helpful to me.”

Father Martin Cioppi also met Msgr. Graf at St. Charles Seminary, and although he was older and a prefect for his group, they became life-long friends. “He was a real friend and a pleasure to live with,” he said.

“I would say he was a faithful, zealous priest,” Father Cioppi added. “He was very compassionate and had a great sense of humor, even about himself.”

Because of the current pandemic restrictions Msgr. Graf’s funeral was private. A memorial Mass will be celebrated at a later date.