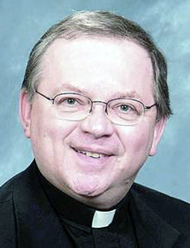 Father Joseph J. Zingaro, 67, pastor of St. John Cantius Parish in Philadelphia, died May 20, which was the 42nd anniversary of his of ordination to the priesthood. His death was caused by complications from COVID-19.

In the last parish bulletin published prior to his death he exhorted his flock to continue to pray “for young men to hear God’s call to be a priest, especially from our parish.”

The son of the late Joseph Zingaro and the late Mary (Barnak) Zingaro, he attend St. Josaphat School in the Manayunk section of Philadelphia and Roman Catholic High School before entering St. Charles Borromeo Seminary.

In 1993 he was appointed pastor of Sacred Heart Parish, Swedesburg follower by pastor of St. John Cantius Parish in 2000, and Holy Name of Jesus, Philadelphia in 2013.

He returned to St. John Cantius in 2014 where he remained until his sudden death.

Other secondary assignments he had over the years included associate director of the Office for Youth and Young Adults and vocations coordinator.

“He was loved,” said Dave Zagorski, the director of Parish Services at St. John Cantius. “The parish was his main focus. I’ve known him since he was at St. Adalbert’s where Msgr. (Anthony) Jaworowski was his mentor. He had the same type of personality.”

Because of the ongoing pandemic Father Zingaro’s funeral was private. A memorial Mass will be celebrated at a later date.