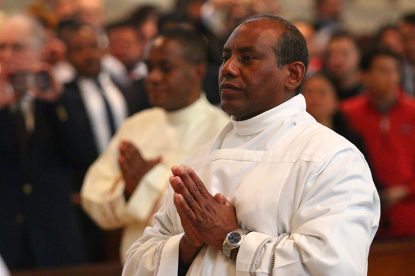 Deacon Wilmer Chirino Gonzalez, shown during his ordination in May 2019 as a transitional deacon, is preparing for his priestly ordination June 20 at the Cathedral Basilica of SS. Peter and Paul. (Photo by Sarah Webb)

Transitional Deacon Wilmer Chirino Gonzalez will have completed long journeys in both time and space when he is ordained a priest for the Archdiocese of Philadelphia by Archbishop Nelson Perez on Saturday, June 20 at the Cathedral Basilica of SS. Peter and Paul.

Across more than 2,000 miles from his native Venezuela to Philadelphia, with stops along the way over the years, now at age 49 his sacred vocation will soon be realized.

Growing up in Carabobo, Venezuela, the third of the seven children of Jose Ramon and Andrea, the family was relatively poor. As a young man he was not personally religious, but he always remembers his mother praying the rosary. Through his own initiative he trained as a printer and opened his own shop.

He did well, and his life was good. “I was making money,” he recalls. “I thought, ‘People will love you when you make money.'” But gradually he came to realize that wasn’t really true, and “God loves us all, rich and poor,” he said.

Deacon Chirino started going to church. Also he came upon the Neocatechumenal Way, a movement in the Catholic Church founded in 1965 and dedicated to Christian formation.

As he became more and more involved with the movement, he decided to  enter the seminary. At first he studied through local Neocatechumenal Way programs but then was transferred to Guam for further formation at the seminary conducted by the Archdiocese of Agana.

Guam is, of course, an American protectorate but with several languages including Spanish and English. Many of the residents are bilingual, which made it easier for a Spanish-speaking seminarian to navigate.

But two years ago he and fellow seminarian Cesar Izaguirre were, at the invitation of Archbishop Charles Chaput, transferred to Philadelphia to complete their studies at St. Charles Borromeo Seminary and ultimately to be ordained and incardinated for service in this archdiocese.

As is the Philadelphia custom, this past year since his ordination as a transitional deacon in May 2019 at St. Charles, he has been assigned to an archdiocesan parish to learn further exactly what a parish priest does. In his case he has been serving at Our Lady of Grace Parish in Penndel under the tutelage of Msgr. Joseph Prior, who he considers has been an excellent mentor.

“I like the people in Penndel, they opened their hearts to me,” Deacon Chirino said. “I’m grateful especially because my English is not very good.”

That has been his biggest handicap. As an older man, changing languages has not been easy, but everyone at the parish has been encouraging.

“I have found people that don’t know me are open to me because they are open to the voice of God. Little by little God has helped me to open up,” Deacon Chirino said. 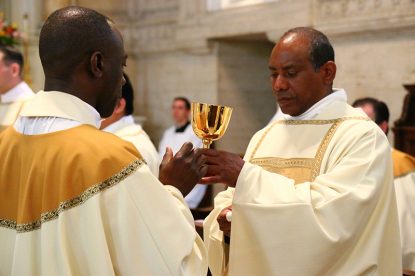 Deacon Wilmer Chirino Gonzalez, right, distributes holy Communion during his Mass of ordination as a transitional deacon last year. He will be ordained a priest June 20 in Philadelphia. (Sarah Webb)

Through his years in seminaries his spiritual life has expanded. His favorite prayers are to St. Joseph and the Blessed Virgin as well as the Litany of the Saints and the Lord’s Prayer. And he also has special devotion to St. Teresa of Kolkata and St. Maria Goretti.

Now on the cusp of his priestly ordination, Deacon Chirino’s only regret is his family probably will not be able to attend because of pandemic quarantines. “I love them so much,” he said.

After ordination he will be assigned to a new parish in the archdiocese. Where, he doesn’t know, but that doesn’t matter. “I just want to be open to God’s will,” he said.

His first Mass will be celebrated Sunday, June 21 at Our Lady of Grace, and then his new life as a priest — a new journey through space, time and eternity — really begins.

NEXT: With 8 kids, new deacon knows all about life balance