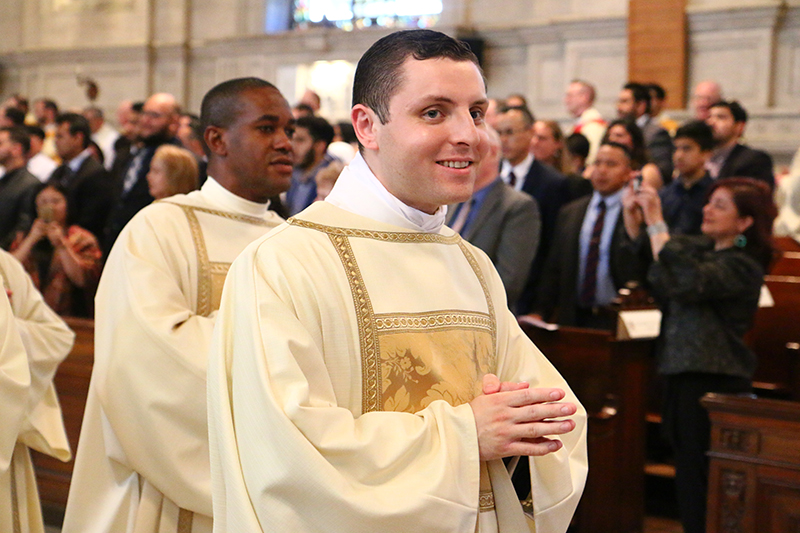 August Taglianetti enjoys the moment of his ordination as a deacon (along with classmate Kevin Okafor, left) in May 2019. Both men will be ordained priests for the Philadelphia Archdiocese June 20 by Archbishop Nelson Perez. (Photo by Sarah Webb)

The seed of a vocation to the priesthood was planted early in the mind of Deacon August Taglianetti, who will be ordained a priest for Philadelphia on June 20, when he was growing up in Lafayette Hill as the oldest of the five children of Thomas and Stephanie Taglianetti.

There was the example of Father (now Msgr.) Charles Vance, then as now pastor of  St. Philip Neri Parish where he served as an altar boy. Closer to home there was his uncle, Bernard Taglianetti, who was himself a transitional deacon when he stood behind August as sponsor at his confirmation.

Father Taglianetti went on to be a professor of moral theology at St. Charles Borromeo Seminary and is now the administrator of St. Bridget Parish in East Falls.

“It was always in my mind I would enter the seminary,” Deacon Taglianetti recalls.

The thought stayed with him all the way through his grade school years at St. Philip Neri School and Plymouth Whitemarsh High School, but he hesitated. He thought he might try college first and study to be a teacher and get some experience. He could enter the seminary later if he still had the desire.

With this in mind he enrolled at Bloomsburg State University. But in addition to his studies, he became an active member of Bloomsburg’s Newman Club with Father Timothy Marcoe, a priest of the Harrisburg Diocese, as its  dynamic director.

It was at a retreat conducted by Father Marcoe during his sophomore year, Deacon Taglianetti recalls, that the topic of religious vocations came up. 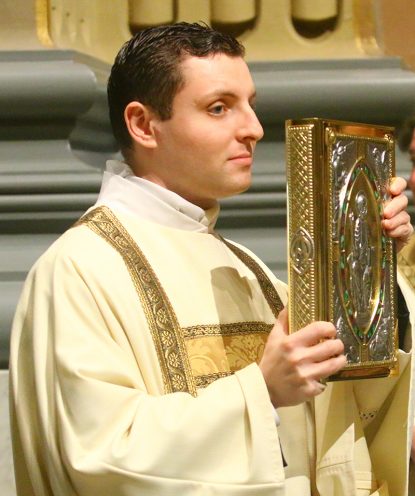 “I said I was considering the priesthood,” he remembers. Another student commented, “God gives us holy desires in order to turn us to his will.”

“That was very profound,” he said. “After that I started to think less about becoming a teacher and more about entering the seminary.”

When he told this to his family, most members thought he should wait a bit, finish his college education, and begin a career as a teacher, maybe travel a bit. He could still enter the seminary later if he still wished to do so.

He did receive encouragement from his paternal grandfather, who thought entering the seminary a wonderful idea. His uncle Father Taglianetti also gave him quiet encouragement, telling him, “Whatever you do, do it for Jesus.”

He sent for an application to St. Charles Seminary, which was approved, and he entered St. Charles where he finished his college years followed by his years in theology and now, he will be ordained soon.

His only real sorrow during his seminary years was the sudden death of his mother. It was a terrible blow, but with the support of the faculty and his fellow seminarians he got through it.

His deacon year has been spent at St. Christopher Parish in Northeast Philadelphia, learning what it is to be a parish priest under the tutelage of Msgr. Joseph Garvin.

“He is a good pastor and a good priest,” Deacon Taglianetti said.

As he looks forward to his ordination Mass at the Cathedral Basilica of SS. Peter and Paul, he anticipates the presence of all of his role models including Msgr. Vance, Uncle Bernard, Msgr. Garvin and so many others. His first Mass will be celebrated June 21 at St. Philip Neri Church where it all began.

“I am very much just looking forward to being a priest; I can’t describe it in words,” Deacon Taglianetti said. “To be a priest, to be a sacramental sign of God’s love in the world, is just unfathomable to me. I am grateful and humbled.” 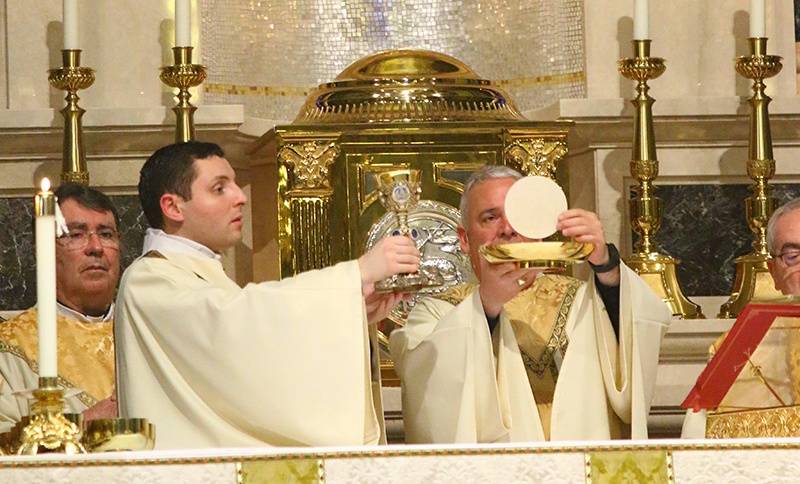 Deacon August Taglianetti assists at the altar at the installation Mass of Archbishop Nelson Perez as Archbishop of Philadelphia on Feb. 18, 2020 at the Cathedral Basilica of SS. Peter and Paul. (Sarah Webb)

PREVIOUS: The youth from Nigeria will be a priest for Philadelphia

NEXT: His journey to priesthood stretches continents, decades into eternity