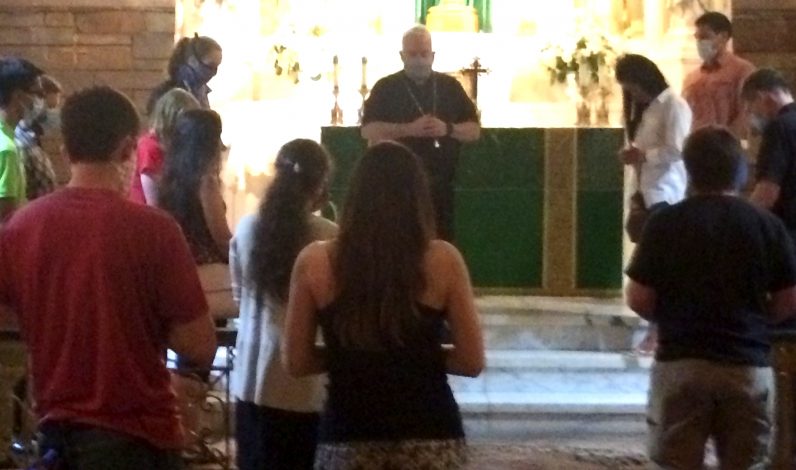 Young adult Catholics pray around the altar with Archbishop Nelson Perez July 8 at St. Agnes Parish in West Chester, of which he was once the pastor until 2012.

Catholic Young Adults of Chester County (CYACC) welcomed Archbishop Nelson Perez to St. Agnes Church Wednesday, July 8 for an evening of eucharistic adoration, a reflection by the archbishop and a question-and-answer session.

Approximately 30 people, mostly in their 20s and 30s, came out to hear the archbishop’s talk. The event also marked the first time CYACC members met in person since the impact of the coronavirus in mid-March, making the get together all the more special.

“It’s good for everyone to see each other again,” said Levi Keene, director of CYACC.

Having Archbishop Perez come and speak to CYACC is a plan that had been in the works since February when he was installed as the Archbishop of Philadelphia. He himself initiated the idea with the organization.

While it was unknown how things would progress in the weeks and months that followed the lockdown, CYACC knew it would move forward and plan an event with the archbishop when possible.

“It’s such a privilege to have our shepherd come,” said Laura Lara of CYACC’s Core Team and a parishioner of St. Agnes. “That is a gift.”

In early June, Archbishop Perez solidified with CYACC that he would be able to come in the near future. Public Masses had already resumed as each section of the five-county archdiocese moved into the yellow phase of the reopening process.

“We were hopeful that the green phase was coming,” said Maggie Watkins of CYACC’s Core Team and a member of St. Norbert Parish in Paoli. “To be able to restart with the archbishop is such a gift.”

In addition to spending time with CYACC, coming to St. Agnes was also a homecoming for Archbishop Perez. He served as pastor of the parish from 2009 until being ordained a bishop on July 25, 2012. 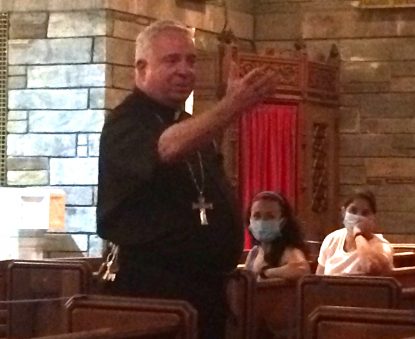 “It’s great to be back in this beautiful church,” he said.

The archbishop shared a reading from St. Paul’s letter to the Philippians: “Rejoice in the Lord always. Your kindness shall be known to all.”

Because the pandemic changed so much of life in the time shortly after Archbishop Perez was installed, he himself had plenty of free time. He spent some of that time reading that particular passage and advised the young adults to do the same.

“Let it speak to you where you find yourself tonight,” he said.

Archbishop Perez reminded everyone that everything we receive is a gift. That includes money that we earned or received from a generous person. Time is the only thing that we actually have. What we do with that time depends on our heart.

“Appreciate what you have, the gift of who you are and time,” he suggested.

When it came time for questions and answers, a young man who did not give his name asked Archbishop Perez for his thoughts on how the church needs to be the pinnacle of the world. The archbishop explained that there are many people that make up the church, and each and every person must do his or her part. It is humanly impossible for an individual to do everything.

“The church is big,” said the archbishop. “I’m only one person. The church includes a lot more people than priests.”

He observed that there is much despair in the world. Hope is what people need, perhaps especially now. Hope is often considered wishful thinking, but it is rooted in trust. Archbishop Perez explained that in order to change the world, we need to be rooted in Christ. It is not always known how God wants us to help but if we ask the Lord what he wants, he will answer.

Mary Rita Geis of St. Joseph Parish in Downingtown was curious as to whether or not a person can say one is gay but also a faithful member of the church. Archbishop Perez advised to “simply love them, accompany them and do not judge them.”

“Sexuality is a language,” he said. “It is something very powerful. The same rules apply whether you are gay or straight.”

The archbishop also reflected on the same major topic in everyone else’s life at this time: the coronavirus pandemic. He talked about how just a few weeks in to his ministry as archbishop, he lived a very different life than he ever imagined. He had made a pastoral visit to Little Flower High School on March 5 and administered the sacrament of confirmation at a few parishes, but then came the virus that suspended the public celebration of the Mass in mid-March.

Just like priests, the archbishop continued to say Mass daily but not in front of a congregation.

“It was tough celebrating the Eucharist without a community,” he said. “It was against our nature as priests. Life, as we all understood it, changed. To care about the common good is to be spiritual.”

The young people listening to their shepherd found his words informative and inspiring, including Shane Flanagan, a seminarian who will be studying this fall in his second year in the Theology Division at St. Charles and is assigned to St. Agnes for the summer.

“I thought he was great,” said Flanagan. “He has a very conversational tone. That goes a long way.”

Archbishop Perez has a love for spending time with youth and young adults. On Tuesday, July 21 he will speak to Metanoia Young Adults at Mother of Divine Providence Church in King of Prussia. 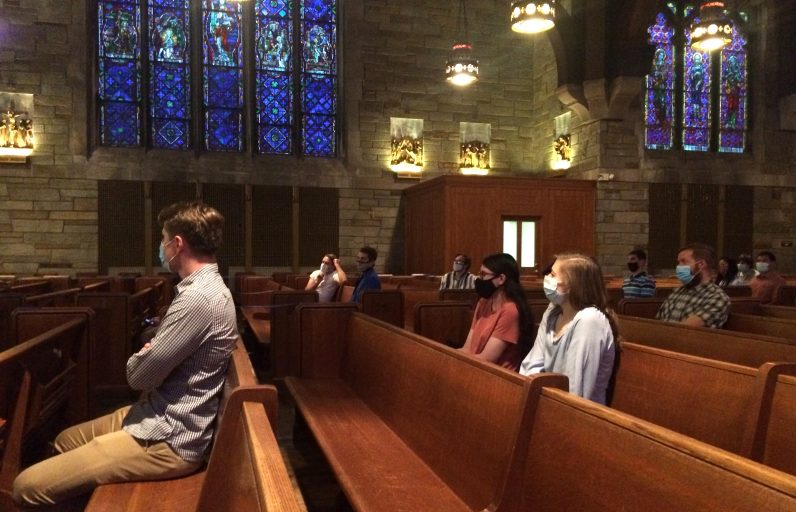 PREVIOUS: Faith blossoms among the flowers at Montco parish

NEXT: Mass at football field scores touchdown with parishioners