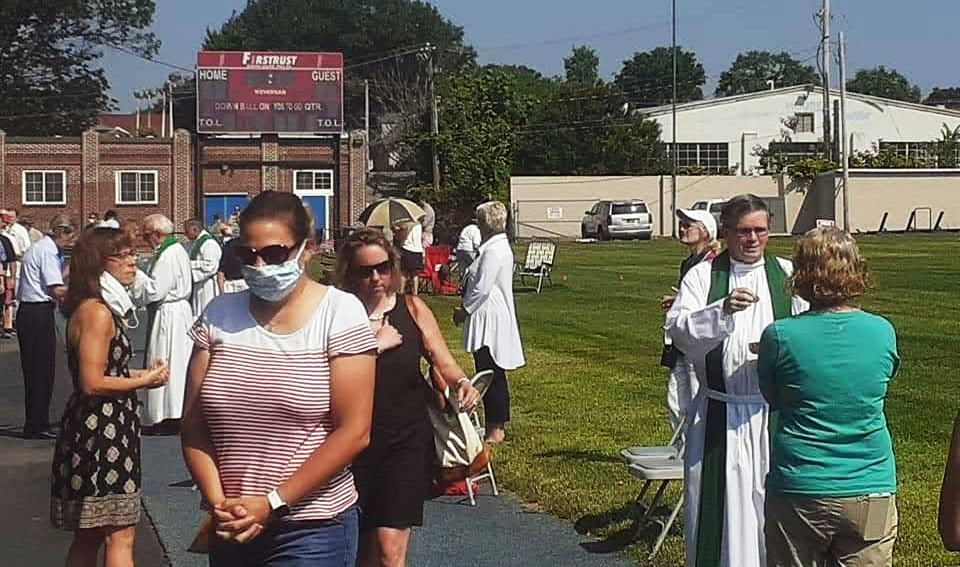 Father Thomas Heron, pastor of St. Matthew Parish in Conshohocken, distributes holy Communion at a July 5 Mass celebrated at that town's A.A. Garthwaite Stadium. The parish recently began celebrating one of its weekly Sunday liturgies at the football field to encourage COVID-wary parishioners to return to in-person worship.

With fears of COVID-19 and summer vacations driving down Mass attendance, outdoor liturgies at a local football field have scored a touchdown for one Montgomery County parish.

For the past two weeks he has celebrated the parish’s 9:30 a.m. Sunday Mass at nearby A. A. Garthwaite Stadium, known locally as the “A-Field.” Parishioners sit at a social distance from each other on bleachers or lawn chairs, while Father Heron, assisted by retired Msgr. Philip Ricci and permanent Deacon Joseph Carr, offers Mass from a portable altar on the playing field.

The parish’s remaining weekend liturgies are celebrated in the church, which is the rain location for the outdoor Mass.

Because there is no electrical supply on the football field for a sound system, Father Heron relies on his powerful speaking voice to ensure faithful can hear the liturgy.

“When I was ordained, my mother said, ‘You’ll never have to worry about a microphone failing you,’” he laughed.

Concelebrant Msgr. Ricci, who sings the hymns a cappella, has an equally robust voice, according to parish life coordinator Mary Kay McKenna. 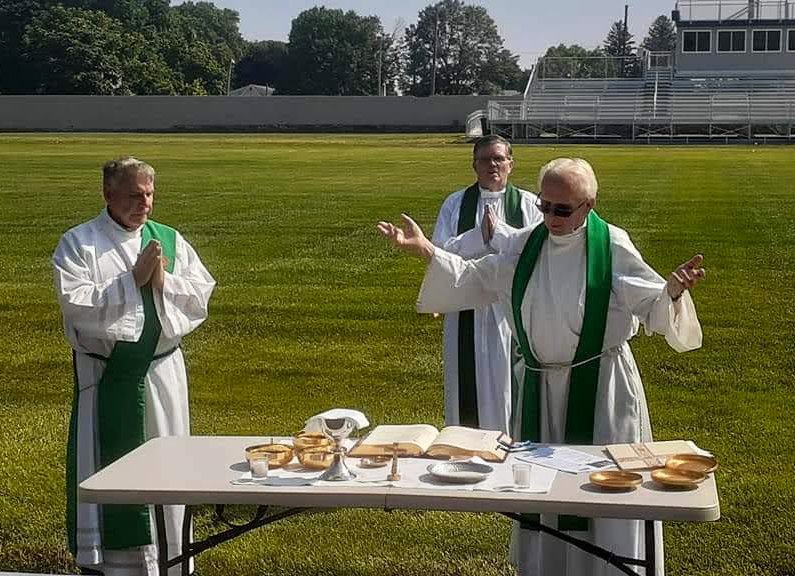 “He sounds like Pavarotti, and I think he has a built-in microphone,” she said, adding she sternly advised the 85-year-old monsignor to swap his black clerical garb for lighter, heat-deflecting colors.

She also cautioned him against “too much singing” while counseling Father Heron against giving a lengthy homily.

“I told Father, ‘You can’t do that; these people will be fried,’” said McKenna.

Parishioners are encouraged to bring umbrellas to shield themselves from the sun, she said, and several attendees who are nurses stand ready to assist should anyone feel faint.

The outdoor liturgies have been drawing roughly 150 participants, including young families and their children.

While St. Matthew’s weekend Masses normally average some 1,100 participants in total, “you could count on two hands” the number who have returned since public liturgies resumed, said McKenna.

“There’s a heartache, a heart sickness, when you’re used to seeing that many people every weekend, and then you only see 25 or 30,” Father Heron said.

Rather than wait for a possible September uptick in attendance, he and McKenna decided to investigate what was keeping parishioners from the pews, now that COVID restrictions have been eased.

“I asked people I saw at the post office or in the food market, ‘Are you uncomfortable coming back to Mass?’” said Father Heron.

McKenna found that despite the church’s rigorous sanitation protocols, many parents feared their children might contract the coronavirus at in-person Masses — so much so that no youth altar servers were on hand for a recent pastoral visit by Archbishop Nelson Perez.

During a meeting with consultants from the Malvern-based Catholic Leadership Institute, parishioners mulled ways of addressing the challenge, with member Janet DiGregorio suggesting the outdoor Mass.

“We jumped on it,” said McKenna. “I emailed the councilman right after the meeting to request permission, and he got back to me that evening.”

Researchers and health officials have noted that the risk of contracting COVID-19 is generally lower in outdoor settings, where fresh air can disperse respiratory droplets, while sunlight can inhibit the virus.

Restaurants are expanding outdoor seating, and some schools – such as Rice University – are moving classes into open-sided circus tents.

St. Matthew’s has had prior experience in conducting outdoor Masses. A liturgy during the parish’s 2014 synod gathered an estimated 500 participants on Fayette Street, one of Conshohocken’s thoroughfares. When three area parishes – SS. Cosmas and Damian, St. Mary and St. Gertrude – merged with St. Matthew that same year, a second outdoor Mass was celebrated for all four parishes’ first communicants shortly after their reception of the sacrament.

Having Mass on a football field allows for some dramatic homily visual aids, said Father Heron.

During the July 12 liturgy, he illustrated the parable of the sower by scattering a bag of sunflower seeds upon the congregation, prompting 5-year-old Keira Clarke to ask, “Mommy, why did God throw seeds all over us?”

St. Matthew’s plans to continue the outdoor Masses through Aug. 9, and Father Heron said that parishioners are looking forward to the upcoming liturgies in the sun.

“People were stopping and thanking me, saying they hoped we could do it again and assuring me they plan to invite others whose shared their reservations about coming to church,” he said.

Mass in the fresh air and sunshine thawed the spiritual chill of the past several weeks, giving parishioners renewed hope, said Father Heron.

“I could observe people walking away with a little bit of a bounce in their step, because they had received the Eucharist,” he said.

Parishioners at St. Matthew Parish in Conshohocken gathered July 5 for an outdoor Mass at nearby A. A. Garthwaite Stadium. (Photo courtesy of Alicia Fabrizio)