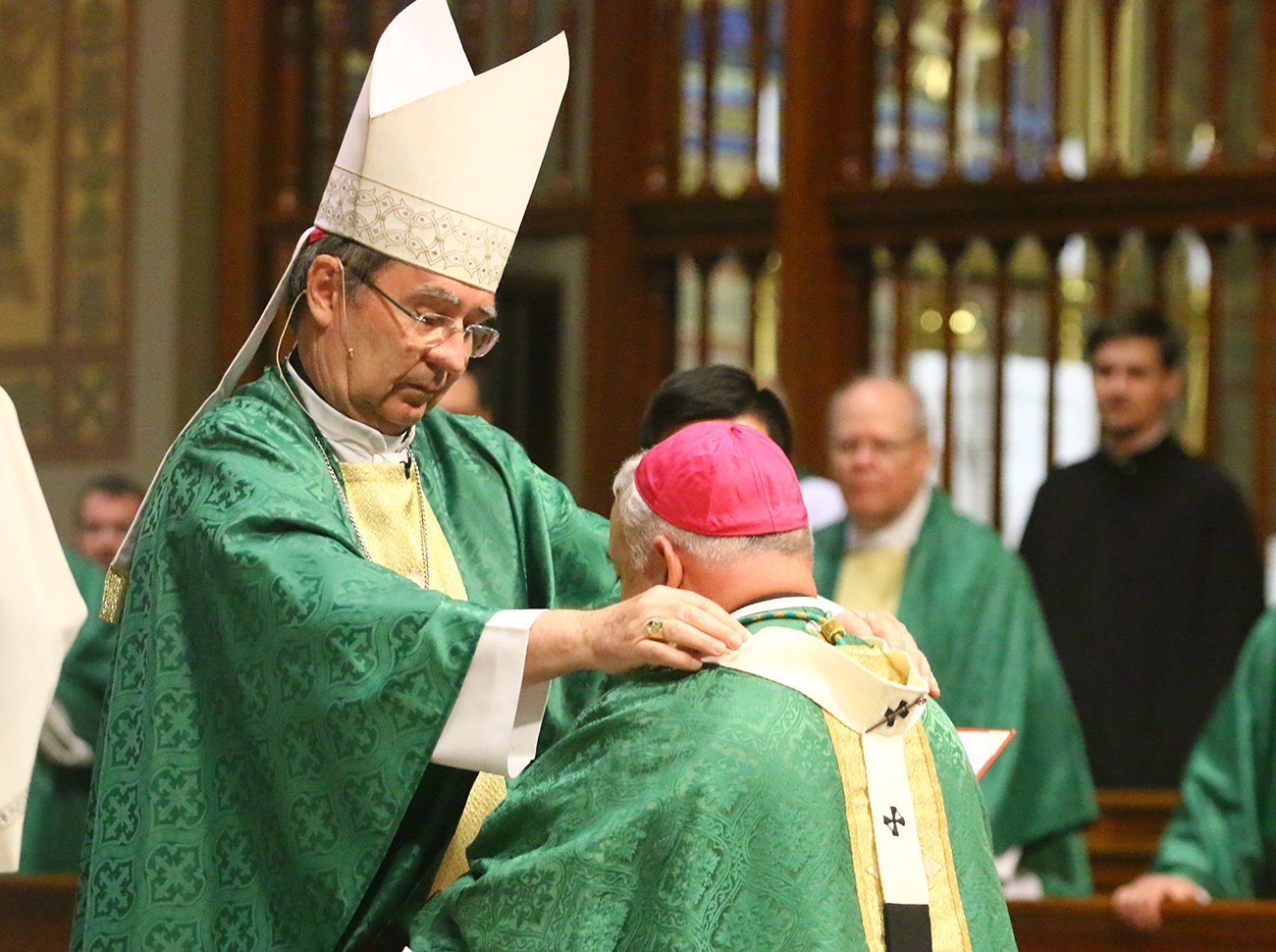 Archbishop Christophe Pierre, apostolic nuncio to the United States, confers the pallium on Archbishop Nelson Perez during a July 19 Mass at the Cathedral Basilica of SS. Peter and Paul. Since ancient times, the vestment has symbolized communion with pope while reminding bishops of their mission to lead the faithful to Christ. (Photo by Sarah Webb)

Archbishop Nelson Perez received a highly symbolic vestment – along with a detailed job description from Pope Francis’ representative – at a July 19 liturgy attended by some 300 faithful.

Apostolic nuncio Archbishop Christophe Pierre, the papal ambassador to the United States, conferred the pallium on Archbishop Perez during the 11 a.m. Mass at the Cathedral Basilica of SS. Peter and Paul.

(Related: View a photo gallery of the July 19 Mass at the Cathedral Basilica of SS. Peter and Paul.)

The woolen band is worn over the metropolitan archbishop’s chasuble (the outer liturgical robe) at Mass within the geographic boundaries of his metropolitan area. Since Christian antiquity, the sash – secured with three pins to recall the nails of Christ’s crucifixion — has symbolized communion with the pope.

Catholic archbishops appointed throughout the world during the previous year normally travel to Rome to receive the pallium from the pope on June 29, the feast of SS. Peter and Paul. Months prior to the gathering, the lambs whose wool is used for the sash are left overnight at the tomb of St. Peter following the feast of St. Agnes (Jan. 21).

This year, travel and social restrictions due to the coronavirus pandemic precluded Archbishop Perez from receiving the pallium directly from Pope Francis, who blessed and entrusted the vestment to Archbishop Pierre for conferral.

In his homily, the apostolic nuncio said the pallium is “simple but has great meaning.”

Quoting Pope Francis, Archbishop Pierre said the sash is “a sign of unity between the sheep and the shepherd, who like Jesus carries the sheep on his shoulders.”

Turning to Archbishop Perez, the nuncio quipped, “I noticed that yours are quite broad.” 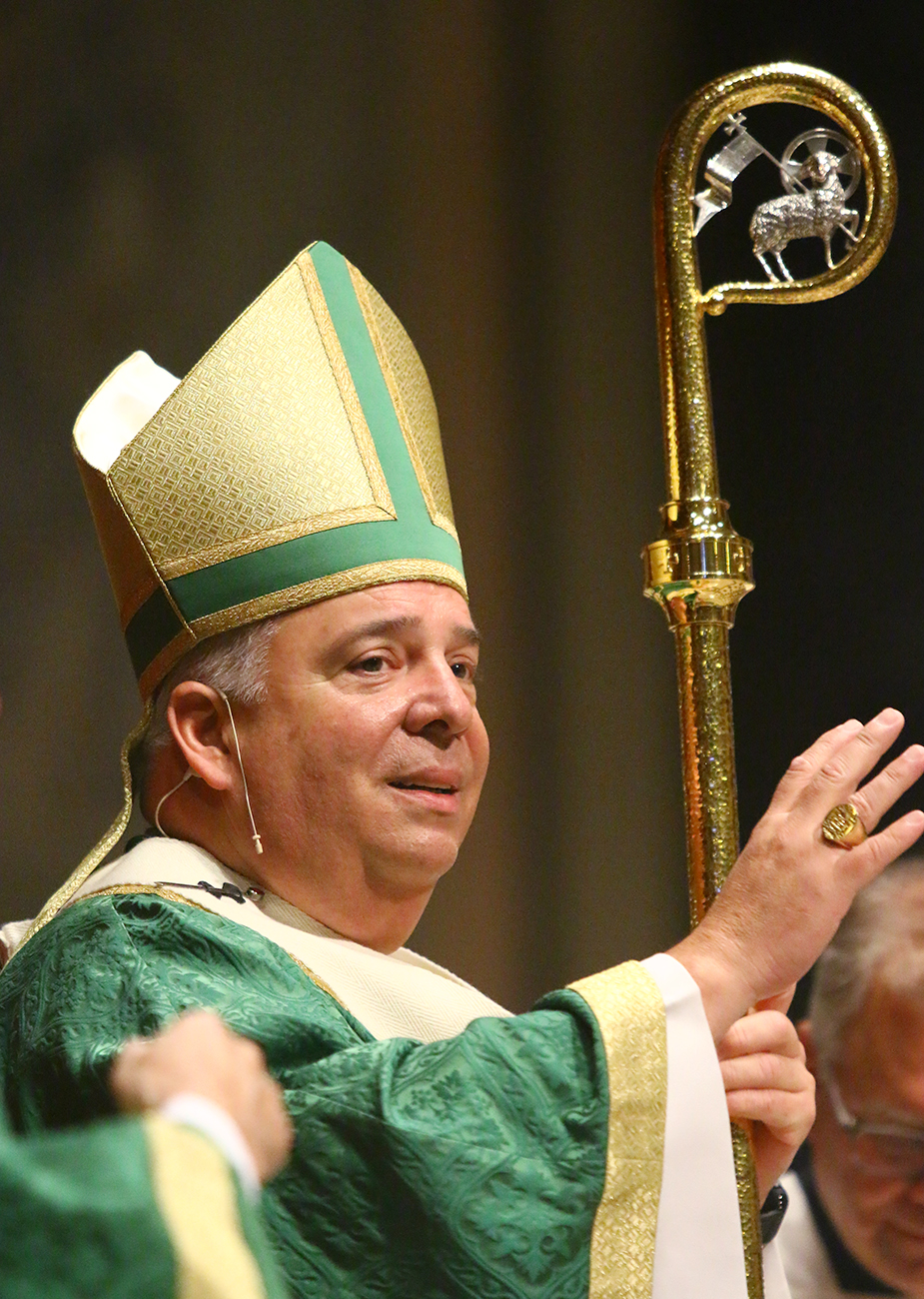 Archbishop Nelson Perez gives a blessing at the conclusion of a July 19 Mass at which he was invested with the pallium, a vestments worn by metropolitan archbishops to symbolize communion with the pope and service to the faithful. (Sarah Webb)

“It’s quite a job,” he said, adding that while the Catholic faith has been present in the Philadelphia area for more than two centuries, in recent years “the spiritual and cultural patrimony of the church in this region has been … at times … obscured by sin and darkness.”

Sexual abuse scandals, priest shortages, parish mergers and closures, and an increasingly secularized society have all posed formidable challenges to the faith, he said.

In recent months, he added, the COVID-19 pandemic, racial injustice and social unrest “have left the people of God longing for relief.”

Yet the kingdom of God “develops according to its own laws, not ours,” said Archbishop Pierre.

Referencing part of the day’s Gospel, the parable of the weeds (Mt 13:24-30), Archbishop Pierre said that patience and discernment are essential to the journey of faith.

“Jesus cautions his disciples to be patient, because things are not always initially clear,” he said.

Just as the sower waited until the harvest to sort his crop, said Archbishop Pierre, “the church embraces people who have the possibility of responding to the divine mission by being transformed from sinner to saint, from weed to wheat.”

The same task of discernment will also require Archbishop Perez to undertake “difficult decisions that must be made to prune and reform structures for the sake of … evangelization, and to help the church in Philadelphia and beyond the diocese,” said Archbishop Pierre.

At the same time, he said, the Philadelphia Archdiocese “needs a shepherd who models the holiness of Christ” and who can “lead the flock on an adventure of faith” that ultimately brings joy through a relationship with God.

As pastor of a large flock, an archbishop “has to be able to see that in the hands of God, everything is different,” said Archbishop Pierre.

In his post-Communion remarks, Archbishop Perez admitted that the nuncio’s summary of his pastoral responsibilities was a daunting one.

“I kind of said to myself, ‘Is this guy for real?’” joked Archbishop Perez.

He added that the nuncio “is for real, but it’s not just my reality: it’s all of our reality.”

Archbishop Perez said that “we make great things happen, powerful things happen,” through “working together, each serving the Lord, the Good Shepherd.”

He thanked the numerous bishops and priests who had traveled to concelebrate the July 19 liturgy, including Archbishop Borys Gudziak of the Ukrainian Archeparchy of Philadelphia, Bishops Alfred Schlert of the Allentown Diocese, and Bishop Edward Malesic of the Greensburg Diocese, who was recently named the new bishop of the Cleveland Diocese, Archbishop Perez’s previous see.

Archbishop Perez commended his archdiocesan staff members, with whom he said he meets weekly “for about 24 hours on Tuesdays” to work “for the good of the church.”

Such collaboration, taxing and tedious as it may be at points, ultimately yields good results “in God’s time,” he said.

“Many times our beginnings are very small,” he said. “But they turn out later on to be very big and powerful.”

NEXT: Couple relies on faith as COVID cancels their wedding plans, twice