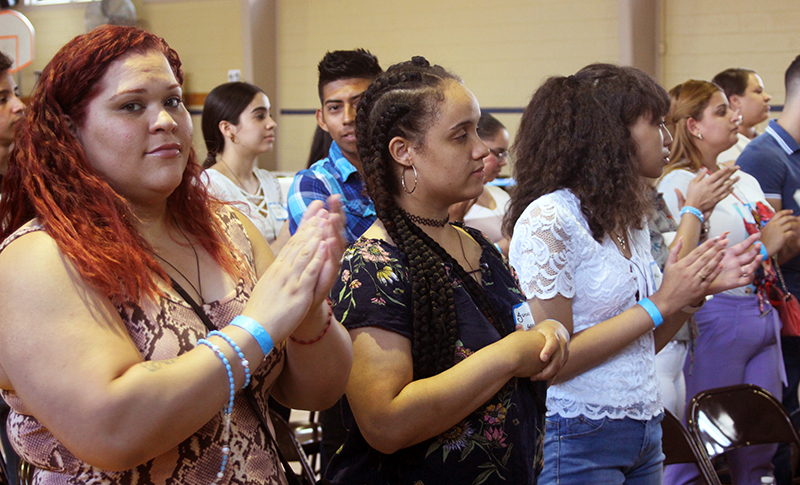 Participants join in worship during a July 2019 youth retreat sponsored by the Office for Hispanic Catholics at Holy Innocents Parish in Philadelphia. In a July 16 statement, the Archdiocese of Philadelphia announced it will restructure its ministry to youth and young adults to better serve the needs of a increasingly diverse and complex pastoral landscape. (Photo by Gina Christian)

As the U.S. bishops seek to engage the next generation of faithful, the Philadelphia Archdiocese has announced it will revamp its model for evangelizing youth and young adults in the five-county area.

In response to the recent recommendations of an archdiocesan task force, Archbishop Nelson Perez has formed two new and distinct offices for this outreach, a decision that was announced in a July 16 statement by the archdiocese.

One of the new offices will focus on ministry to youth, which the U.S bishops define as young people ages 12-18 in junior high school or high school.

The second office will dedicate itself to working with young adults, ages 19-39, from a broad array of social states, including single, married, divorced, widowed, in college, working, unemployed, incarcerated or in military service.

Each office will have its own director, with staffing to be determined and with “appropriate collaboration” between both entities, according to the statement. A search committee is expected to staff the outreaches by the fall.

The work of both offices will be overseen by Ann Menna, archdiocesan deputy secretary for catechetical formation, and Father Stephen DeLacy, who serves as Archbishop Perez’s delegate for youth and young adult ministry in addition to his role as director of the Vocation Office for the Diocesan Priesthood.

The updated structure replaces two previous models for archdiocesan youth and young adult ministry – Anthem, which was launched in June 2016, and its predecessor, the Office for Youth and Young Adults (OYYA), which was dissolved in 2012.

Both modes of ministry and evangelization had sought to address the needs of youth and young adults under the auspices of one administrative team and supporting staff.

In its statement, the archdiocese noted that “over the years, the landscape of youth and young adult ministry has evolved rapidly along ethnic and cultural lines,” making a single, one-size-fits-all approach increasingly less responsive to current pastoral needs.

The profound life changes that take place throughout adolescence and young adulthood also make a more tailored approach desirable, said the archdiocese, citing “national best practices (that) have shown that hybrid ministerial models” are inadequate in meeting the specific needs of a given age group.

Soon after his arrival in Philadelphia, Archbishop Perez — who also serves as an episcopal advisor to the National Federation for Catholic Youth Ministry — formed the task force to assess the effectiveness of archdiocesan outreach to youth and young adults.

The group, which included representation from local and national levels, relied on three key documents to guide its work: “Renewing the Vision” and “Sons and Daughters of Light” from the U.S. Conference of Catholic Bishops, and Pope Francis’s apostolic exhortation to young people, “Christus Vivit.”

Task force members consulted with senior archdiocesan leadership as well as pastors, youth ministers and young adults throughout the five-county region, exploring various concerns among multicultural communities and those with disabilities.

Archbishop Perez “expressed sincere gratitude for the hard work and dedication” of the Anthem and OYYA staff, said the statement, which added that the new model “will be accompanied by further study and research” to ensure “appropriate development as well as allocation of resources in a prudent fashion.”

NEXT: From cathedral’s pews to Planned Parenthood, faithful rally for life