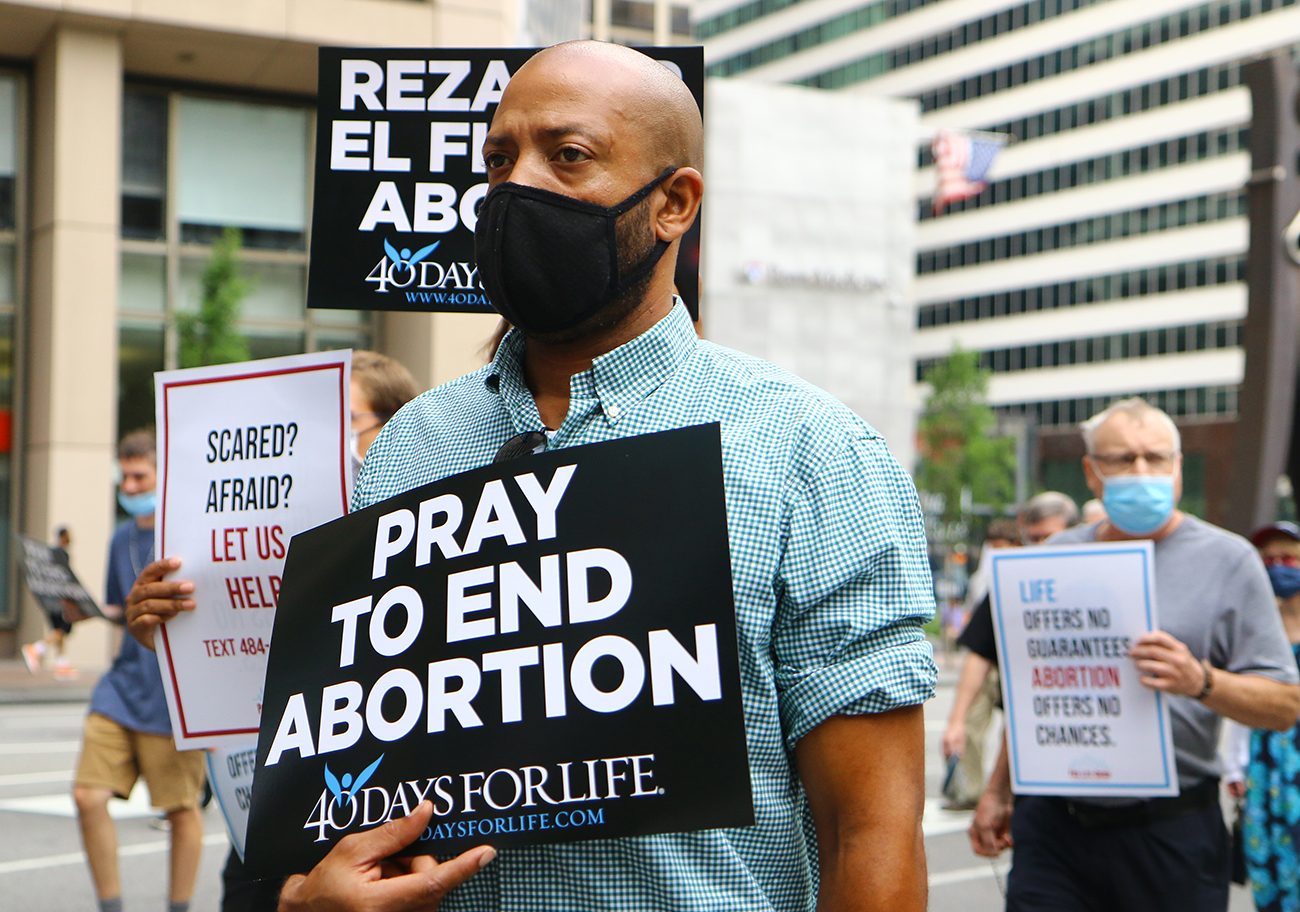 A participant in a July 25 pro-life Mass and prayer vigil walks from the Cathedral Basilica of SS. Peter and Paul to Planned Parenthood in Center City. The gathering, sponsored by the Pro-Life Union of Greater Philadelphia, drew some 400 attendees, whom Archbishop Nelson Perez commended for their steadfast efforts to promote the sanctity of human life. (Photo by Sarah Webb)

Archbishop Nelson Perez led a gathering of some 400 area faithful who rallied this past weekend for an end to legalized abortion in the U.S.

Sponsored by the Pro-Life Union of Greater Philadelphia, the July 25 program began with a morning Mass celebrated by Archbishop Perez at the Cathedral Basilica of SS. Peter and Paul. Wearing face masks, participants of all ages filled the pews under current social distancing guidelines, with a number standing at intervals in the side aisles.

(View our photo gallery of the July 25 Mass and rally sponsored by the Pro-Life Union of Greater Philadelphia.)

Following the liturgy, attendees recited the rosary and the chaplet of Divine Mercy as they walked to Planned Parenthood’s Center City location for an ecumenical prayer vigil and rally.

Both Archbishop Perez and cathedral rector Father Dennis Gill noted that the day’s liturgy coincided with the feast of St. James the Apostle — an appropriate time to combine “prayer and action” for the pro-life cause, said Father Gill, since the Scriptural letter traditionally attributed to the saint “invites us to be doers of the word” of God.

“We pray that we might be valiant witnesses to the culture of life, not just with our vigil this morning … but more importantly perhaps around our kitchen tables, in our homes and where we work,” he said.

Archbishop Perez announced he would offer the Mass, which he described as the “perfect prayer,” for women contemplating abortion, so that “the Lord will touch their minds and hearts, and give them resources … to be able to choose life.”

Those resources are needed more than ever, said rally speakers Krajewski and Downing, who each noted that poverty often contributes to the decision to seek an abortion. 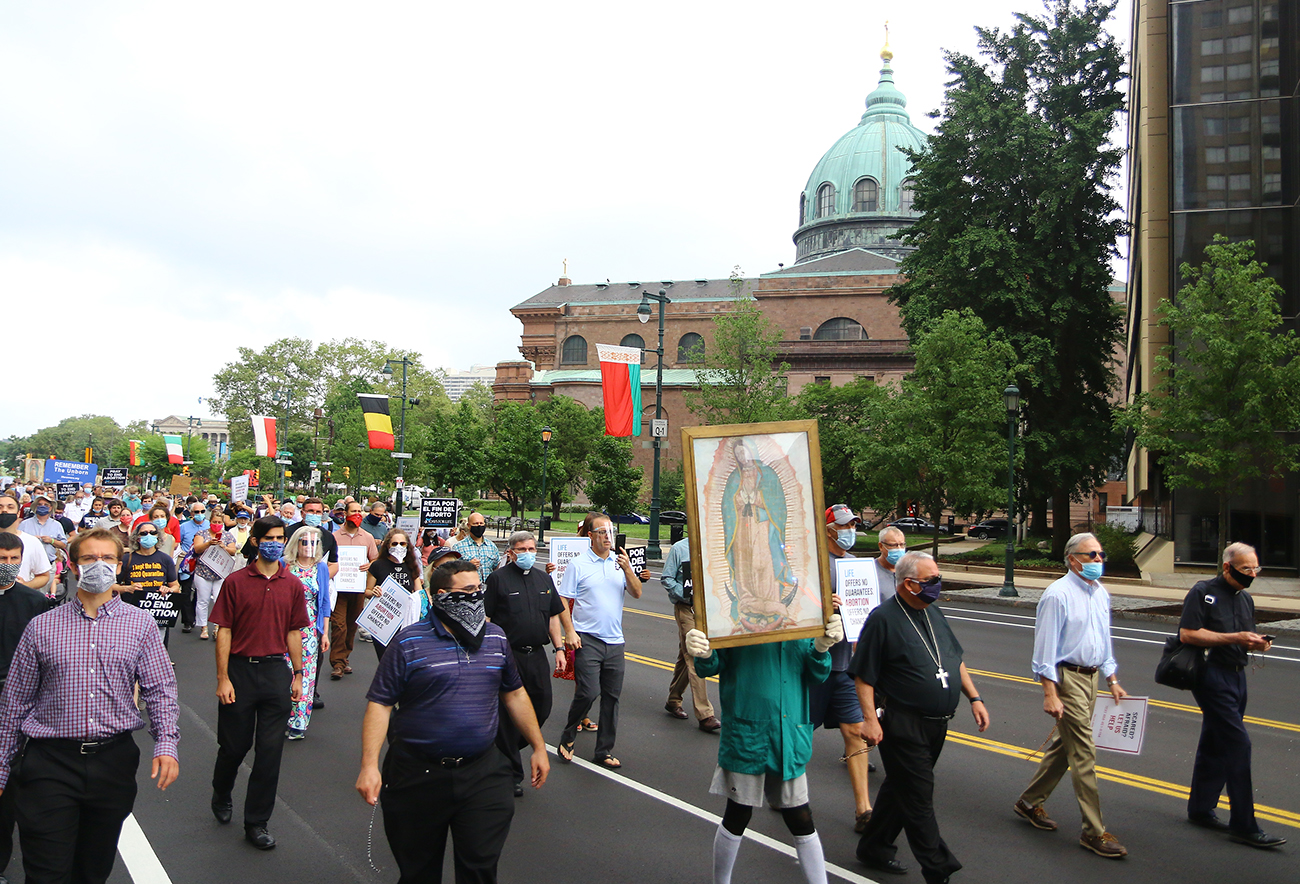 Archbishop Nelson Perez (third from lower right) walks in a July 25 procession from the Cathedral Basilica of SS. Peter and Paul to a prayer vigil at Planned Parenthood in Center City. The gathering, sponsored by the Pro-Life Union of Greater Philadelphia, drew some 400 participants. (Sarah Webb)

In a 2016 report, the Centers for Disease Control (CDC) found that non-Hispanic black women had the highest abortion rate, while overall abortions fell 24% from 2006 to 2015.

Poverty rates have remained disproportionately high among Blacks (20.8%) and Hispanics (17.6%), according to the U.S. Census Bureau. COVID-19 has exacerbated this divide, with 16% of Blacks and 20% of Hispanic adults out of work due to the pandemic’s financial fallout, as indicated by a recent Washington Post/Ipsos poll.

Such numbers reveal a complex reality in which systemic racial injustice plays a role, said Krajewski.

“We have to be able to look at both the individual circumstances and the long legacy of communal histories that come together to lead to any particular woman being outside of Planned Parenthood,” she said.

Although “unpacking the why’s and the who’s and the how come’s” can be “a complicated process,” said Krajewski, “that work is still worth doing if … we really mean what we keep on saying, that we actually do care about what happens to those babies.”

Downing called for a greater emphasis on adoption as an alternative to abortion, while challenging rally participants to support expanded housing and economic opportunities for impoverished pregnant women, whom she said often “want to choose life,” but are fearful of homelessness.

“Everyone knows someone who has money, who’s able to use their resources to make sure these lives live,” she said. “Because it’s not only their choice, but it’s our choice to get involved and to stand up for life.”

Fellow speaker Lusk stressed that “the onus is on (Christians)” to ensure that abortion is ended through prayer and “(doing) the right thing.”

“We’re looking for Planned Parenthood to change, but we’ve got to change first,” he said as attendees applauded.

Despite the challenges faced by the pro-life movement, rally participants pointed to several signs of progress.

Father Walsh said that “a great thing happened in the Planned Parenthood organization last week,” noting that the group has begun to reckon with founder Margaret Sanger’s connection to the eugenics movement of the early 20th century.

Eugenicists sought to eliminate so-called “undesirable” elements from the population through birth control, abortion and forced sterilizations, targeting ethnic and racial minorities as well as persons with mental illness and various disabilities.

On July 21, Planned Parenthood of Greater New York announced it would remove Sanger’s name from its Lower Manhattan clinic, an admission that Sanger was a “bitter, angry racist” who “wanted to kill people of color,” said Father Walsh.

“Just as they welcomed that truth, we’ve got one more truth we want them to accept,” he added. “That every life is precious, that life begins in the womb and that we need to help those children come to birth.”

Youth and young adults are increasingly open to pro-life positions on pregnancy and childbirth, said Steven Bozza, director of the archdiocesan Office for Life and Family, citing ultrasound images as pivotal to this shift.

“These kids see that mom’s pregnant, and the ultrasound is stuck on the fridge with pride,” said Bozza, whose office assisted in promoting the event. “They realize that this isn’t a blob of tissue. This is a baby.”

At the annual March for Life in the nation’s capital, he said, “at least 70% are young adults. They clap, they sing, they hold their banners. They’re just on fire.”

“I think a lot of young people are passionate and open to love,” said Terzian, who accompanied the procession by bicycle. “And when they connect with life, with the sense of the Resurrection, there’s nothing that can stop that.”

The results of such efforts may not be immediate, said Archbishop Perez in his homily, but they are ultimately assured – and essential.

“Life is the preeminent issue,” he said. “If we can’t recognize that the basis of everything really is life … then it really doesn’t matter.”

Caring for health and well-being, as well as for the environment, derives from an awareness of that human life is sacred, said Archbishop Perez.

Quoting Pope Francis’ encyclical “Laudato Si’,” the archbishop said that “concern for the protection of nature is … incompatible with the justification of abortion,” since it is impossible to “genuinely teach the importance of concern for other vulnerable beings … if we fail to protect a human embryo.”

He encouraged participants to remain steadfast in their dedication to the pro-life movement.

“Never underestimate the work of the Spirit in you, through you and despite you as you strive to protect … and raise your prophetic voice for the defense of life,” said Archbishop Perez.

NEXT: Doubleheader on home field for Archbishop Perez