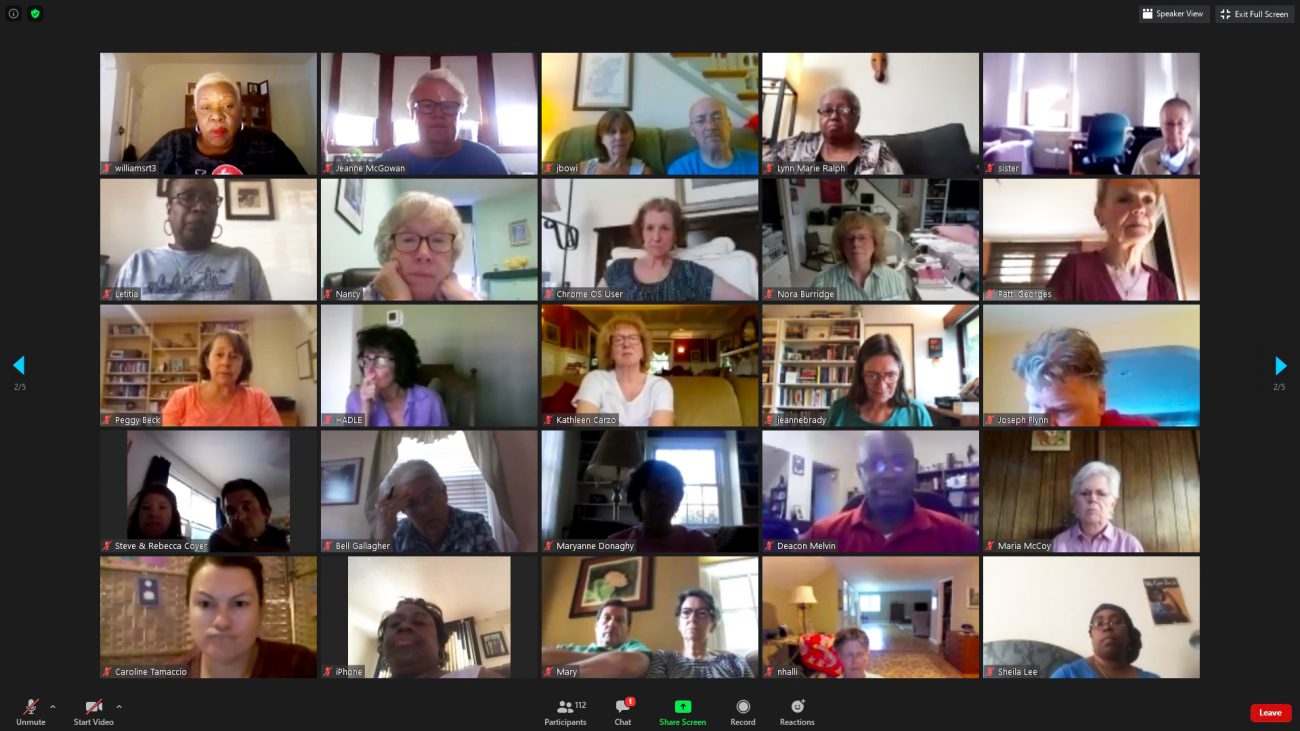 More than 120 parishioners from St. Martin de Porres in Philadelphia and St. John Chrysostom in Wallingford met during a June 29 virtual town hall to discuss racial healing from a faith-based, pastoral perspective. (Photo by Gina Christian)

A month after the George Floyd killing, two Philadelphia parishes — one largely African American, the other predominantly white — are creating what one pastor called a “template for conversations” on racial healing.

A June 29 virtual town hall on the topic drew more than 120 members of St. Martin de Porres in Philadelphia and St. John Chrysostom in Wallingford.

The Zoom meeting was coordinated by the parishes in response to Floyd’s May 25 death under Minneapolis police restraint, which sparked waves of global protest against racism and police brutality.

Pastors Father Stephen Thorne and Father Edward Hallinan shared their insights on overcoming racism in response to parishioner questions. The hour-long discussion was moderated by James Andrews, a St. Martin de Porres parishioner who also serves as the Diocese of Camden’s director of Black Catholic ministry and racial justice commission coordinator; and Mary Chollet, director of ministry and communications at St. John Chrysostom.

Father Thorne acknowledged that “talking about race is very, very uncomfortable,” but both pastors stressed that the town hall conversation was rooted in faith.

“We gather tonight as a Christian community,” said Father Hallinan. “This is not Fox News, this is not CNN. This is a faith community, so we look at the issue through the eyes of the word of God … of Catholic social teaching … of Jesus in the Gospel.”

From that perspective, racism can clearly be seen as a sin, said Father Thorne, adding that “you will not get inside seating, outside seating or even curbside pickup in God’s kingdom if you are racist.”

He described racism as both a “disease” that “affects all of us,” and as “one of many original sins” in the nation’s history, which collectively have marginalized people of color, women and indigenous populations.

Racism remains “prevalent in many ways” even within the Archdiocese of Philadelphia, he said.

“It was not until 1974 that the first black man was ordained here, and the archdiocese was founded in 1808,” said Father Thorne. “I cannot and will not believe that no black man (in the Philadelphia area) was called to the priesthood until 1974.”

Philadelphia’s former St. Peter Claver Parish, which closed 1985, was “born out of racism,” he said, since “it was there because nobody wanted these folks to worship with them in the name of Jesus.”

More recently, said Father Hallinan, a black archdiocesan priest was detained by police while driving to his new assignment at a Bucks County parish.

When the priest explained the purpose for his trip and asked why he had been pulled over, the officer replied, “I can’t picture any place up here you’re going to be living and working,” said Father Hallinan.

Churches themselves remain far from ethnically diverse, said participants, something civil rights activist Dr. Martin Luther King Jr. had lamented 60 years ago when he described Sunday morning at 11 a.m. as “the most segregated hour in America.”

A 2015 study by Tennessee-based LifeWay Research found that many Christians are content to keep it that way: more than 53% did not feel their churches should do more to promote diversity, and 33% objected strongly to calls for such action.

In contrast, Father Thorne and Father Hallinan said parishes must strive to become “places of hospitality” and welcome.

“Unfortunately, we have all these boundaries and we try to keep people where they’re at in their neighborhoods,” said Father Hallinan. “We need to work harder with the intention of bringing the community together to worship.”

Andrews shared that his position at the Diocese of Camden required him to confront an unconscious bias he once held against those who found themselves homeless.

“From the parking lot, I would have to pass a soup kitchen, and (having been) a schoolteacher, I concluded that (patrons) were (ultimately) there because they didn’t do their schoolwork,” he said. “As time went on and these people began to wave and say good morning, I realized that they were like me: human.”

Father Hallinan admitted that as pastor of one parish school, he had “backed the principal based on written guidelines” that prohibited an African American student from wearing her hair in a natural, culturally appropriate style.

Later, a former student who herself was African American advised him that “many black women … feel uncomfortable in their own hair” due to societal pressures to conform to white fashion.

“She made me realize that I was enforcing racism,” said Father Hallinan. “I thought the guidelines would guide me, but …. it was all white folks, with no appreciation of hair for the African American person.”

Education and continued dialogue are crucial to “untying (the) knots that keep us from being together,” said Father Thorne, who has been asked to join a Philadelphia mayoral committee on racial justice and healing.

A longtime instructor, Father Thorne shared a reading list with town hall participants, saying, “We’ve got some work to do, church.”

Many of the town hall’s participants indicated via chat box messages that they wished to continue the conversation. In response, Father Thorne called for a committee to explore and develop pastoral strategies for dismantling systemic racism.

“I feel (so) much energy here tonight, and I feel this is something the Spirit has put into our hearts, to be a template for other parishes,” he said.

“All of you (have given) a lot of hope here,” he said. “Your presence empowers us to continue.”

— U.S. Conference of Catholic Bishops (USCCB), “Open Wide Our Hearts: The Enduring Call to Love.“ The full text of the USCCB’s pastoral letter can be found here, and additional resources (including prayers, videos and a study guide) can be accessed on the USCCB’s “Combatting Racism” website.

— Bryan D. Massingale,  “The Assumptions of White Privilege and What We Can Do about it.” National Catholic Reporter, June 1, 2020.