Bucks County parish opens its heart to dogs in need 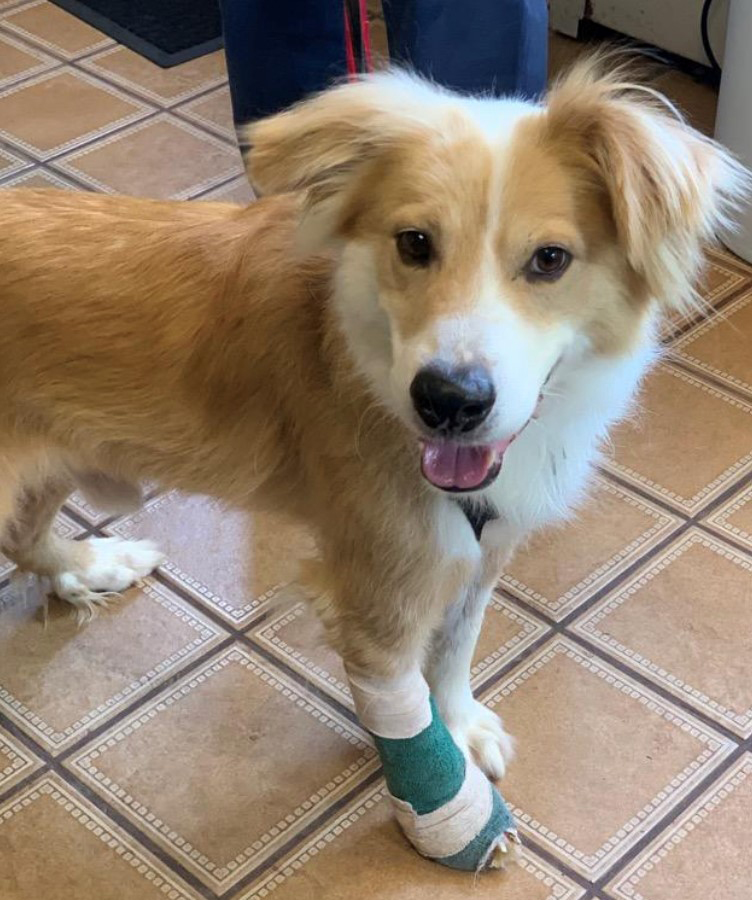 Tucker is one of several dogs awaiting foster and adoption by Lulu’s Rescue, a Bucks County nonprofit that has successfully partnered with St. Martin of Tours Parish in New Hope to help find homes for the animals, who would otherwise be euthanized. (Photo courtesy of Michele Armstrong / Lulu’s Rescue)

A Bucks County parish has “gone to the dogs” – or, more accurately, the dogs have gone to them for some much-needed help.

For the past four years, St. Martin of Tours Parish in New Hope has welcomed regular visits from Lulu’s Rescue, a nearby non-profit that finds new homes for adoptable dogs in danger of being euthanized. The organization also promotes spay and neuter outreach, as well humane education.

Almost every week, rescue staff bring dogs to the parish parking lot for “meet and greets,” allowing potential owners and pets to get acquainted.

In addition, parishioners collect dog food, leashes, collars, crates and other items needed by the rescue, which relies heavily on donations and a network of volunteers to sustain its mission.

Father Kindon immediately looked to Lulu’s, which had contacted the parish several months earlier about using its grounds for adoption events. A previous location was less conveniently located for volunteers, and lacked sufficient space for parking and dog walks. The rescue volunteer who proposed the arrangement knew Father Kindon from his visits to the veterinary clinic where she worked.

With COVID-19 restrictions in place, “St. Martin of Tours has been a godsend, giving us the room to spread out while still being together and keeping the dogs safe,” said Michele Armstrong, executive director of Lulu’s Rescue.

Large-scale meet and greets are on hold for now, she said, but smaller, one-on-one get-togethers continue, supplemented by pictures and videos on the rescue’s website.

The pandemic has led to “an uptick in owner-surrendered dogs” and in animal abuse, “which has been heartbreaking,” said Armstrong.

“We also have been drastically affected by not being able to have in-person fundraising events to help us save death row and owner-surrendered dogs,” she added.

Working with the parish has led to “an increase in our adoption rates,” Armstrong said. “Father Kindon’s kindness and love of our mission has allowed us to help save more lives.” 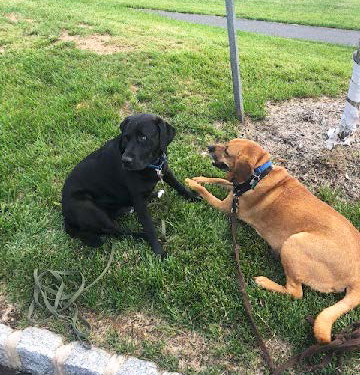 “Animals bring something out in people,” he said. “When you see people picking up their adopted dog, they’re all excited. It does something positive to families; one family got a puppy and to see the three young kids playing with it … how could you not adopt?”

Having dogs as part of parish life is also a form of evangelization and welcome.

“You’d be amazed how people look forward to seeing them, and kids love them,” he said.

Artie had been a fixture in the rectory for years, and when he died, “it was like parishioners lost a friend,” said Father Kindon.

Griff has stepped into his predecessor’s paw prints, he said, and “comes over to the office all day long to meet and greet people. They walk in, and he waits for that belly scratch.”

The foxhound has become fast friends with fellow “paw-rishioner” Buck, a black Labrador retriever adopted from Lulu’s by a member of St. Martin.

“They have play dates,” Father Kindon said. “They wrestle and body slam each other, even in this summer heat.”

Griff has also been known to plant himself firmly in front of McDonald’s – a holdover from his days on the street, said Father Kindon.

“I was walking him at 6 a.m. one morning, and he laid down in the drive-through and wouldn’t move,” he recalled. “There were four cars waiting for coffee. And if he sees or smells French fries, he goes wild.”

The neglect and cruelty experienced by many rescue animals can be “unfathomable,” said Father Kindon.

Adopting a rescue dog is courageous, he said, and in a way mirrors God’s unconditional acceptance of humans.

“Obviously these people are willing to take a rescue with the risk of whatever junk they’ve had in their life,” said Father Kindon.

NEXT: Amid gloom of COVID, Camp Rainbow shines