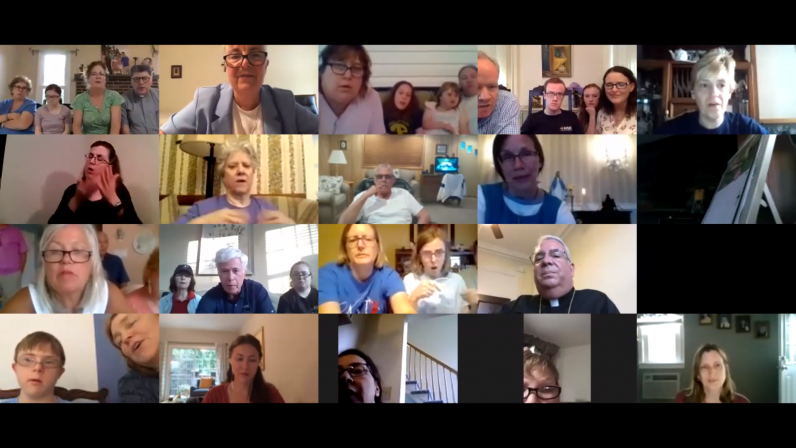 Prayers of petition are prayed during a virtual prayer gathering for persons with disabilities and their families on June 30, sponsored by the archdiocesan Office for Persons with Disabilities.

Persons with disabilities and their families gathered online with Archbishop Nelson Perez on June 30 for a prayer meeting organized by the archdiocesan Office for Persons with Disabilities.

Led by Deacon Michael Cushing with the help of his family, the gathering provided a way for the community to connect and pray for and with one another during a time when many cannot attend Mass.

While the public Masses have resumed in the Archdiocese of Philadelphia, many people are unable to attend because underlying health conditions, chronic illness or mobility issues.

In addition, the annual archdiocesan Mass for Persons with Disabilities, originally scheduled for March 21, was cancelled due to coronavirus restrictions.

This Mass is usually a great source of excitement for persons with disabilities and their families, as they congregate as a community and meet the archbishop, noted Sister Kathleen Schipani, I.H.M., director of the Office for Persons with Disabilities.

Archbishop Perez was able to join this virtual prayer gathering and offer an opening reflection and blessing. Afterwards, Deacon Cushing proclaimed the Gospel and shared a homily. Then prayers of petition were offered, with the response led by Cara Cushing, Deacon Cushing’s daughter, and her aunt, Anita Shea. American Sign Language interpreter Jennifer Durkin translated the prayer gathering.

Archbishop Perez stayed for the entire service, sharing his prayer intentions during the petitions and interacting with families. 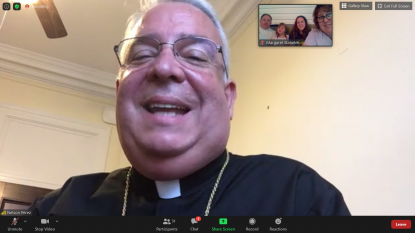 Archbishop Nelson Perez greets a family during a virtual prayer gathering June x organized by the archdiocesan Office for Persons with Disabilities.

“After a long day of administration meetings, this has been the highlight of my day,” said Archbishop Perez at the end of the gathering.

Cara Cushing introduced Archbishop Perez at the start of the meeting. She made sure to mention his birthday, which just recently passed on June 16. Donna Cushing, Cara’s mother, said her daughter loves birthdays and has a talent for remembering everyone’s birth date.

In his reflection, Archbishop Perez shared Philippians 4:4-7, which he said he holds dear and shared as a “gift” to those gathered “as God’s word for all of us today.”

He encouraged participants to rejoice because the Lord is near, to be thankful, and with a thankful heart to then bring our requests to God in prayer and petition.

The fruit of such prayer is that “the peace of God that surpasses all understanding will guard your hearts and minds in Christ Jesus” (Phil 4:7).

One thing Archbishop Perez was grateful for was “that I’m with all of you, really powerful people of faith that show great kindness and great love to the people around you. And so you are a gift to me and you’re a gift to the Church of Philadelphia, precisely because of your prayer and your petition and your spirit of gratitude, of gratitude for the big things but also gratitude for the little things in life.”

The archbishop also shared a saying he has now imparted to thousands: “Never underestimate the power of the spirit of God working in you, through you and despite you.”

“Thank you, archbishop for your beautiful words. We enjoyed going to your installation (as Archbishop of Philadelphia)” said Susan, adding with a laugh, “I think that was about the last thing we’ve been to.”

After three families greeted the archbishop, Deacon Cushing proclaimed the story of the man born blind in the Gospel of John, and shared a homily. The deacon was originally supposed to proclaim and preach on this gospel during the fourth week of Lent but was unable to with the suspension of public Masses. 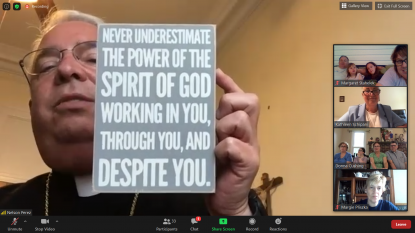 In that Gospel, Jesus’ disciples ask him whose sins are being punished by the man born blind, his or his parents. Jesus tells his disciples the man was born blind not because anyone sinned, but “so that the works of God might be made visible through him” (John 1:3).

Deacon Cushing said persons with disabilities and their families may ask, “why is this happening to us?” As a parent of a child with a disability himself, he acknowledged the fears, sadness and worry people experience. But addressing the parents gathered, he answered the question of why: “Your beautiful child is here to make God’s glory visible to the world.”

Following the homily, participants could share prayer intentions via two Zoom features. They could press a button that would show a raised hand, upon which Sister Kathleen would unmute their sound and allow them to share verbally.

After the stated intention, Cara and Anita Shea led the group with the invocation “Let us pray,” to which everyone responded, “Lord, hear our prayer.”

As the gathering came to a close, Sister Kathleen encouraged participants, “may we continue to pray for one another.” 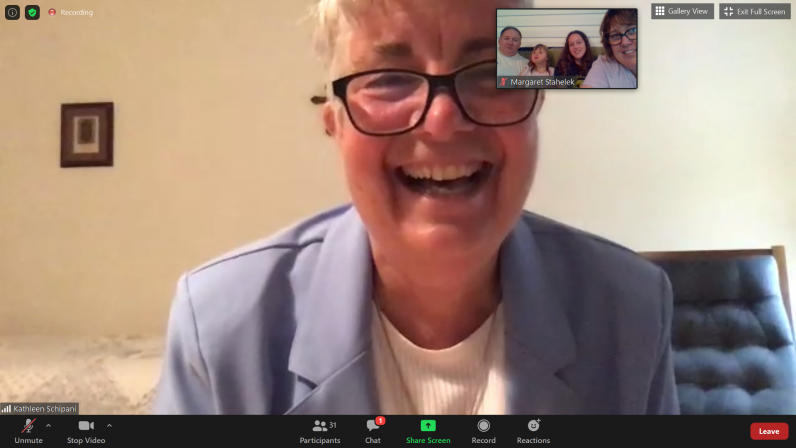 Sister Kathleen Schipani, I.H.M. chats during the virtual prayer gathering for persons with disabilities and their families. Sister Kathleen is the director of the Archdiocese of Philadelphia’s Office for Persons with Disabilities. (Image courtesy of Margaret Stahelek)