“Because we trusted.” These words were printed on the t-shirts worn by high school young men, who after months of uncertainty gathered online and in person during several days of activities this week in the 12th annual Quo Vadis discernment retreat.

The retreat aims to help young men learn how to discern God’s will for their lives through spiritual exercises, fellowship, recreation and talks from St. Charles Borromeo seminarians and guest speakers.

“Quo vadis is Latin for “where are you going?” This year, that question was pondered by the Vocations Office for the Diocesan Priesthood as the coronavirus threatened to cancel this year’s retreat.

The office organizes the retreat, which typically would take place at Black Rock Retreat Center in Quarryville, Pa. with outdoor activities like swimming and basketball. As restrictions were placed on group gatherings and organizations shut their doors, running Quo Vadis in its typical fashion was no longer an option.

Instead of cancelling Quo Vadis, organizers decided to move it online from June 29 to July 1.

Fittingly, the theme of this year’s retreat was “Jesus, I trust in You,” the words given by Jesus to St. Maria Faustina Kowalska to be inscribed at the bottom of the Divine Mercy image.

Vocation director Father Stephen DeLacy said he was a little skeptical that online experiences can be the same, but no matter what, “God always shows up.” 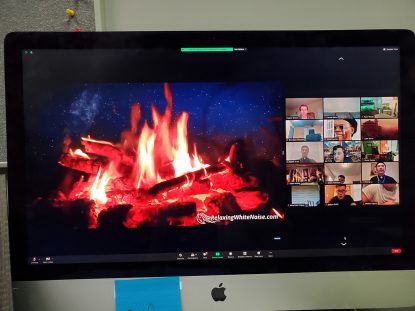 What’s a camp without conversation around a campfire? The Vocation Office for Diocesan Priesthood got creative in offering the 12th annual Quo Vadis discernment retreat, which typically is held as a typical outdoor summer camp, online this year because of the coronavirus pandemic.

When asked if there were any challenges, retreatant Peter Wilder said there “really weren’t any” because the vocations office “anticipated challenges and very quickly adapted … so that it was very organized online.”

This organization came with lots of creativity, for which Archbishop Nelson Perez said the vocations office should be commended.

Keeping the same spiritual exercises as in years past, the retreat virtually gathered for online Mass and Liturgy of the Hours. And a unique rosary walk allowed participants to call in and join the devotion on a meditative, prayerful walk.

On Monday night, June 29 after Zoom conferences in the opening day of the retreat, Father DeLacy led a penance service that was livestreamed and broadcast on Holy Spirit Radio. Retreatants and their families were invited to go to in-person confession at any of five locations designated in the archdiocese.

Proper respect was paid to social distancing, and the seminarians volunteered to sanitize the churches before and after confessions.

Finding online ways to engage in recreation meant a Philly-themed Kahoot trivia game, ice breakers and other online games. Not to mention a virtual escape room, which retreatant Peter Wilder described as not only “awesome” but also allowed his small group to bond. 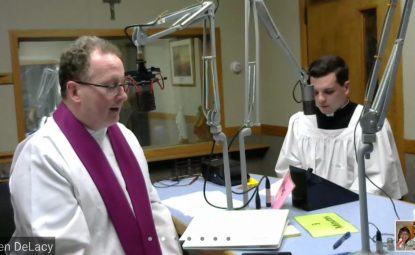 Vocation director Father Stephen DeLacy and a seminarian lead a penance service broadcast on Holy Spirit Radio and livestreamed to retreatants during Quo Vadis, an annual discernment retreat for high school men. (Image courtesy of the Vocation Office for the Diocesan Priesthood)

A recently graduated senior, Wilder is from Montana and come August he will enter St. Charles Borromeo Seminary in Wynnewood. If the retreat had been in-person, Wilder said he would not have been able to attend.

Wilder’s small group included three other young men who also will be entering the seminary in August. He said the retreat opportunity allowed him to get to know some of the guys with whom he will most likely spend the next few years.

A retreatant from Texas and two in New Jersey were also able to attend the retreat entirely online. In-person confession and participation in the closing outdoor eucharistic procession at Mother of Divine Providence Parish in King of Prussia on Wednesday evening, July 1 were optional for those unable to attend.

Masks and social-distancing were employed at the procession, and seminarians sanitized the church afterwards.

Family members were invited to attend both in-person events, something that wouldn’t usually happen at Quo Vadis.

Being a part of the retreat made mom Anamaria Hazel take notes on how she can support her son in his discernment. 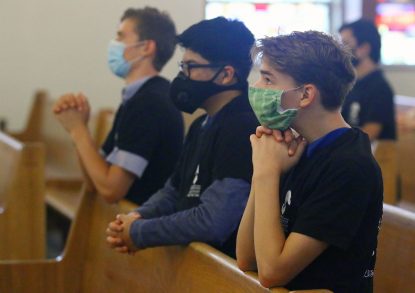 Some of the young men on the Quo Vadis discernment retreat pray together before a eucharistic procession at Mother of Divine Providence Parish in King of Prussia. (Sarah Webb)

Malika Saboy, mom of retreatant Joshua Brooks, said it was good to see her son feel a sense of belonging and connection to Catholicism, and for him to know he wasn’t alone in his decision to follow the Lord.

During the procession, the sunset made the monstrance “illumine with the glory of all creation,” according to Father DeLacy, which he thought was a special gift for those watching online.

Afterward Father DeLacy asked any young man who felt he grew in his trust of God during the retreat and intended to keep growing, to step forward and receive a blessing from Bishop Deliman. Every young man stepped forward.

Of course, God can transcend technology so all blessings were extended to those joining online.

Father DeLacy then invited the young men entering the seminary in August to receive a blessing from Bishop Senior.

Finally, any young man who felt he might he might have a calling to the priesthood was invited to receive a blessing from Archbishop Perez. Eleven young men came forward.

As Bishop Senior said while reflecting on this year’s retreat, “The Holy Spirit provides.” 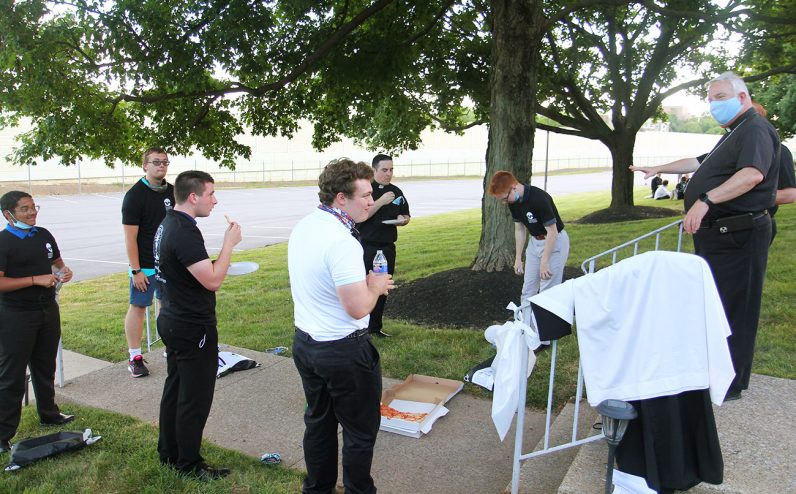 Archbishop Nelson Perez talks with some of the 32 young men discerning God’s call to the priesthood for the Archdiocese of Philadelphia during the closing of the Quo Vadis retreat July 1 at Mother of Divine Providence Parish, King of Prussia. (Sarah Webb)

PREVIOUS: Persons with disabilities gather online for prayer with archbishop

NEXT: Seniors eat their veggies, fruit thanks to archdiocesan partnership