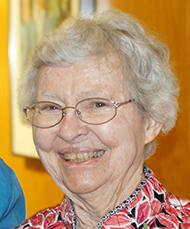 Medical Mission Sister Patrice McSweeney died June 5 as a result of Covid-19. She was 88 years old.

Sister Patrice was born to American parents William and Grace McSweeney in Colombia. The family moved to Venezuela when Sister Patrice was 7. She later moved to Albany, N.Y. for schooling and graduated from high school in 1950 from the Academy of Holy Names in Tampa, Fla.

In 1953 Sister Patrice returned to Albany and earned her R.N. from St. Peter’s Hospital School of Nursing. She joined the Medical Mission Sisters in 1954 and made final vows in 1962.

Upon her return to Philadelphia in 1996, Sister Patrice was a parish worker and served on her congregation’s North American Justice Committee. She volunteered in the MMS Mission Development Center until staff began to work remotely in March 2020 due to Covid-19.

Sister Patrice was a talented writer and artist, exemplified in her poetry and handiwork on cards and letters. She was cherished for her gentle and caring nature and appreciated for her quick wit which lightened a moment without detracting from the seriousness of a situation.

Her private burial was held June 10 at her community’s North American Headquarters in Philadelphia.

NEXT: Sister Julia Burkart, a Ph.D. sociologist, dies at 92