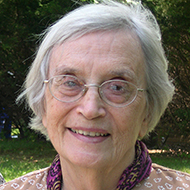 Sister Julia Burkart, M.M.S., a Medical Mission Sister and New Orleans native, died as a result of Covid-19 on June 22. She was 92 years old.

Sister Julia joined the Medical Mission Sisters in 1948; she received a B.A. from Trinity College in Washington, D.C. in 1952 and then a master’s degree in library science from Catholic University in 1953. She worked in the MMS library and in publicity in Philadelphia until 1956.

From Philadelphia Sister Julia traveled to Holy Family Hospital, Rawalpindi, Pakistan where she worked in the admissions office for four years, and then to the Philippines for one year. She returned to the States and spent several years working as librarian in MMS’s Philadelphia office and Washington, D.C. and as a staff member at St. Vincent’s Hospital and Child Study Center.

In 1972 Sister Julia received an MSW from St. Louis University and worked as a social worker in St. Louis and Las Vegas. She began teaching college-level courses in 1975 and earned her PhD in sociology in 1983 from Texas Women’s University. She taught for 12 years at Arkansas State University.

When she retired from teaching, Sister Julia volunteered in prison ministry, in a soup kitchen, as a child advocate, parish worker and chaplain. She lived in Louisiana, Arizona and Florida.

Sister Julia was down-to-earth and diplomatic yet frank in voicing her strong opinions about social justice and bureaucracy. Her life was her mission.

She was buried privately June 26 at her community’s North American Headquarters in Philadelphia.