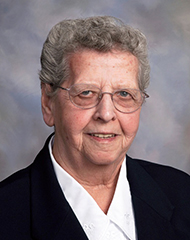 Sister Frances Marie Devinney, I.H.M., died of natural causes May 26 in Camilla Hall, Immaculata at age 83 and in the 66th year of her religious life.

She was born on March 5, 1937 in Philadelphia to Nicholas and Lillian (Lupo) Devinney from Our Lady of Mt. Carmel Parish in Bridgeport, where Frances and her brother Nicholas, called Pat, grew up. She attended St. Augustine Elementary School and Bridgeport High School from which she graduated in 1954.

She entered the Sisters, Servants of the Immaculate Heart of Mary on Sept. 8, 1954 and received her habit and her religious name, Sister Marian Josepha on March 8, 1955. She pronounced her first vows on March 10, 1957. In 1988, the Community gave the Sisters the opportunity to return to the use of baptismal names, Sister Marian Josepha returned to the use of her baptismal name Sister Frances Marie.

She would go on to earn her degree in Elementary Education from Immaculata College.

Sister Frances was a staff member at Camilla Hall from August 1996 through 1997, after which she served at St. Joseph School in Ashland, Pa until 2001.

She then returned to Camilla Hall as a devoted staff member, a beautifully kind and faithful I.H.M. sister who served other sisters until her death.

Due to restrictions during this time of the Covid-19 pandemic, the funeral Mass and interment were celebrated privately on Saturday, May 30. Father William E. Dean was the celebrant and homilist at Sister Frances’ funeral Mass.

Sister Frances is survived by her brother Pat, a niece and nephew, grandnieces and grandnephews, and her local community from Pacis Hall Convent and her congregation of I.H.M. sisters.