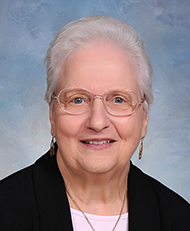 She was born in Brooklyn, N.Y., where she was a member of Holy Family Parish. In 1960 she entered the Franciscan Sisters of Ringwood, a congregation that later merged with the Sisters of St. Francis of Philadelphia, and professed her first vows in 1962.

She earned both a B.S. and a M.A. in education from Seton Hall University as well as a P.D. (Professional Diploma) in administration from Fordham University. She ministered primarily in education.

Sister Annette also served as a teacher and principal for 13 years in the Diocese of Brooklyn.

During her six years in the Archdiocese of Philadelphia, Sister Annette served as a member of the leadership team for the Sisters of St. Francis of Philadelphia.

The funeral Mass was for Sister Annette was celebrated June 17 at St. Francis of Assisi Church in Haskell, N.J. Burial followed in God’s Acre Cemetery in Ringwood.

Sister Annette is survived by her sister, Vita Maggio, her many nieces and nephews and by her Franciscan family. Donations in her name can be made to the Sisters of St. Francis Foundation, 609 S. Convent Road, Aston, PA 19014.