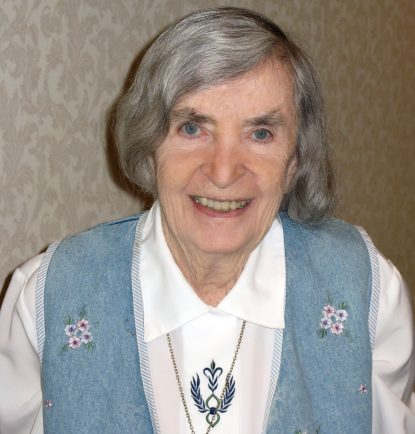 The only child of Charles and Kathryn (Kennedy) Schwarz, Sister Helen was born in Philadelphia, where she attended Transfiguration Catholic School and West Philadelphia Catholic Girls High School. While at West Catholic she came to know and love her teachers, the Sisters of the Holy Child Jesus.

After high school, Sister Helen entered the Society of the Holy Child Jesus in 1946 and made her final vows in 1954. She became well known by her religious name Mother Mary Carl.

In 1966, Sister Helen moved to the West Coast to continue her teaching ministry in Oregon and California. Beginning in 1977, Sister Helen served as the supervisor of secondary schools in the Archdiocese of Los Angeles, a position she held filled for 18 years.

In 1996, Sister Helen was invited to help with the development program at the newly launched Casa Cornelia Law Center in San Diego, a ministry founded by the Sisters of the Holy Child Jesus.

In 2011, her health started to decline so she returned to the East Coast, where she lived in community in Rye, New York, and then moved to Holy Child Center in Rosemont.

Despite her diminishment in recent years, Sister Helen never withdrew from her interest in events of the world and her congregation, and those around her. She will be sorely missed by those who knew and loved her, especially her former students and those she worked with in California.

In lieu of flowers, memorial donations may be sent to the Society of the Holy Child Jesus – American Province, 1341 Montgomery Avenue, Rosemont, PA 19010, or donate online at www.shcj.org/american/donate.