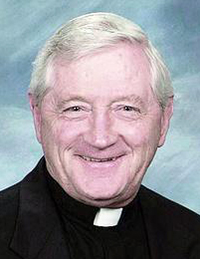 Father McBride was ordained May 19, 1962 at the Cathedral of SS. Peter and Paul by Archbishop John J. Krol and his first assignment was as parochial Vicar at St. Francis of Assisi Parish, Springfield. This was followed by Notre Dame de Lourdes Parish, Swarthmore and St. Aloysius Parish, Pottstown. He also served on the faculty of Cardinal O’Hara High School.

In 1982 he was appointed pastor of Our Lady of the Sacred Heart and served in that role until 2002.

“He was here for a long time and was a very good priest,” said Lisa Moser, a parish worker at Our Lady of the Sacred Heart, although she did not work there during Father McBride’s administration. “He always had a moment to chat with you and he was loved by the whole parish.”

“He did a lot of work at Sacred Heart,” said Msgr. Michael Picard, a friend for the past 53 years. “He built a new church and an addition to the school. He was a very kind person and the people loved him when he was a teacher, an assistant pastor and a pastor.”

Following Our Lady of the Sacred Heart Father McBride took a sabbatical for further studies at the Institute for Continuing Catholic Education in Rome. His next assignment was as parochial vicar at St. Gabriel, Norwood, followed by senior priest at St. Luke the Evangelist Parish, Glenside.

There too, he made many friends and was well liked, according to Father Joseph Brandt, the pastor, who said Father McBride “was very friendly and outgoing, and he kept up with his many priest friends.”

But at St. Luke, Father McBride began having great difficulties with walking because of an injury from a fall. Climbing stairs proved especially problematic and could not be avoided at St. Luke.

For this reason in 2012, at the invitation of Msgr. Picard, he moved to St. Andrew Parish in Newtown, which has a single-floor rectory, and he remained there in retirement. “Our people were happy to have him,” Msgr. Picard said.

There will be a viewing for Father McBride on Wednesday, July 15 at St. Andrew Church beginning at 4 p.m., followed by a parish Mass at 7.

There will also be a viewing at St. Andrew on July 16 beginning at 9 a.m., followed by his 11 a.m. funeral Mass celebrated by Archbishop Nelson J. Perez.

Concelebrants will include Msgr. Donald Leighton, Fathers Leonard Peterson, Marc Capizzi, Kyle Adamczyk, Jason Buck and David O’Brien, as well as Msgr. Picard, who will be the homilist.

Father McBride is survived by five nieces and nephews.