Sister Suzanne Snyder, minister to the marginalized, dies at 84 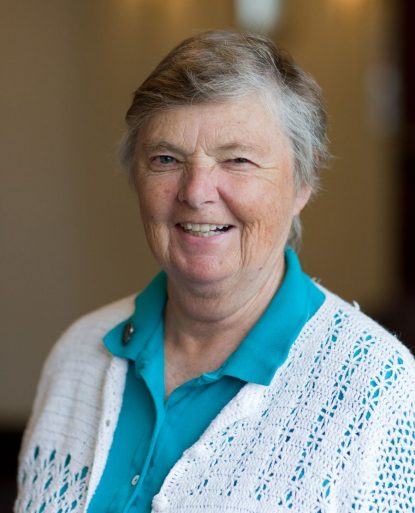 Sister Suzanne Snyder, S.H.C.J., who was a Sister of the Holy Child Jesus for 64 years, died peacefully June 28. She was 84. She brought great compassion along with a wonderful sense of humor to all she was involved in throughout her life.

Sister Suzanne (Sue) was born in Buffalo, New York, but always considered herself a Californian, since she moved there at the age of 10.

Her first two years of teaching were spent at Oak Knoll School of the Holy Child in Summit, New Jersey (1956-1958).

In 1958 she was missioned to the West Coast, where she would remain for the next 57 years, teaching at schools in California and Oregon.

Although Sister Sue was a very effective teacher, her real passion was in working directly with marginalized persons. This led her into prison ministry for three years with Friends Outside followed by several years of pastoral work at MEND, a parish social service center in Pacoima, California.

In 1984 Sister Sue founded and directed the Social Service Center of Holy Cross Parish in Southcentral Los Angeles. Even while living with and caring for her aging mother, she worked part time at the center.

After her mother’s death in 1999 Sister Sue moved to San Diego where she became a court-appointed special advocate ministering to at-risk children.

Sister Sue returned to the East Coast in 2014 to live in Rye, New York where she found many ways to help, in particular, reading each day to a sister whose vision was impaired. In August 2016, Sister Sue moved to Holy Child Center in Rosemont, where she shared her fun-loving and generous spirit and her enthusiasm for sports with others.

She is predeceased by her parents Earl and Helen (Burns) Snyder and her brother, Greg. She is survived by her sister, Carol, a Franciscan, and her brothers, Paul and John.

In lieu of flowers, memorial donations may be sent to the Society of the Holy Child Jesus – American Province, 1341 Montgomery Avenue, Rosemont, PA 19010, or make a gift online at www.shcj.org/american/donate.