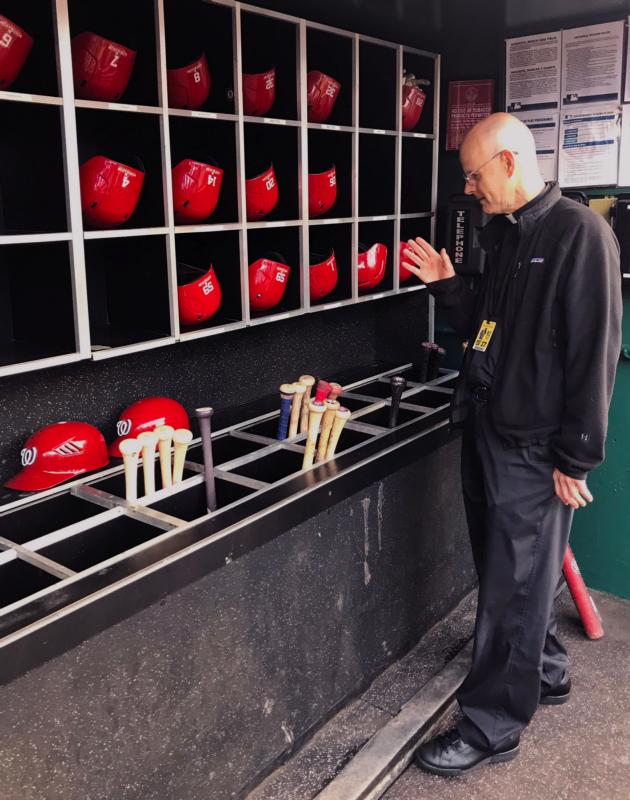 WASHINGTON (CNS) — A baseball season and team are not often synonymous with religious or spiritual themes, but for Msgr. Stephen Rossetti, using words such as “miracle,” “grace” and “faith” are actually the best ways to describe the 2019 World Series champion Washington Nationals.

In a talk at the Museum of the Bible in Washington, Msgr. Rossetti shared with several attendees the Gospel lessons, inspiration and blessings that continue to resonate from a Nationals’ season that began so bleakly, but against all odds rose to baseball’s highest peak Oct. 30, 2019.

“It was deeply moving for me and everybody. You could feel the electricity, something special was happening, a special spiritual grace happening,” said Msgr. Rossetti, referring to the October playoff start. “The players, coaches and staff all felt the same.”

During the regular season, Msgr. Rossetti, who also is a licensed psychologist and teaches theology at The Catholic University of America, celebrates Mass at Nationals Park for the players, coaches, staff, stadium crew and the visiting team before every Sunday home game. The priest said he offers prayers for a safe, healthy game, but he doesn’t pray specifically for a Nats’ win.

“I think God knows who I’m rooting for,” he joked.

After a nearly four-month delay caused by the coronavirus pandemic shutdown, the Nationals opened Major League Baseball’s regular season with a July 23 evening game against the New York Yankees at Nationals Park.

Due to COVID-19 safety precautions, no fans were going to be allowed in the stands, but the game was being televised on ESPN.

Throughout the past decade, Msgr. Rossetti said he has gotten to know many of the Nationals’ front office staff and players. Although a majority of the players are young men between ages 19 and 28, he said they are respectful, mature and often faith-filled individuals.

“From top to bottom (of the Nats’ organization), they are really nice people,” he said in his July 2 talk at the museum.

Msgr. Rossetti showed photographs of some of his favorite moments of the 2019 season, pointing out ways that remind him of the Gospel message. He said the team’s motto for the playoffs — “Stay in the Fight” — is a good example of the Christian virtue of hope.

“Don’t give up. … Hope is important for all our lives,” he said, adding that he told the players: “If you gave up, you wouldn’t be here (in the playoffs.) … It was inspiring that they never gave up.”

After the National League championship series win over the St. Louis Cardinals at Nationals Park, team manager Davey Martinez reflected on the rough start to the season, telling the overjoyed crowd, “Bumpy roads lead to beautiful places. And this is a beautiful place!”

Msgr. Rossetti said this is the same notion as the Paschal Mystery. “We must go through the darkness to get to the Resurrection,” he said. “We all pay our dues. There are no easy lives. The Lord is with us, and walks with us.”

He also commended the Nationals for their great team effort all season long and during the playoffs and World Series, an example of the Christian ideal that every individual is important and counts.

“Each guy had their own moment. Davey believed in them and each guy rose to the moment and contributed,” he said.

Msgr. Rossetti also shared more personal insights on the championship season, including how moved he was to witness the transformation of Nationals pitcher Stephen Strasburg, whom he described as shy, but had come out of his shell thanks in part to teammates Gerardo Parra and Anibal Sanchez.

“It really was the most touching moment of the playoff series,” he said, showing a photo of the three players in a jubilant group hug.

“It’s really been a personal journey for him. He’s grown up, gotten married, had children,” the priest said. “Life becomes for you your own Gospel story.”

Msgr. Rossetti really became a baseball fan when the Nationals first arrived in the nation’s capital in 2005.

Fifteen years later and with a World Series championship on the books, Msgr. Rossetti said he feels very blessed to support the team and help keep the Lord present in their lives — win or lose.

But the season that ended with the championship, in particular, he said was a grace-filled experience that can serve to remind everyone of God’s love and care for all.

“It was a joy to be part of the Nationals’ season in a modest way. I thank the Lord for that grace, and I hope whatever happens (this season), they will do well and ‘Stay in the Fight,'” Msgr. Rossetti said.

NEXT: MLB’s first woman coach a ‘go-getter’ at Jesuit university