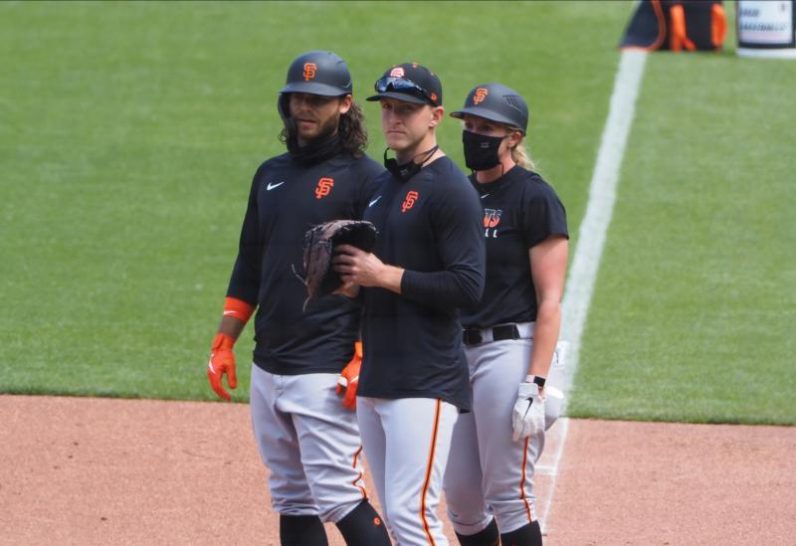 WASHINGTON (CNS) — Another barrier in the sports world was broken July 20 when Alyssa Nakken coached first base in the late innings of an exhibition game between the San Francisco Giants and the Oakland Athletics, thus becoming the first woman to appear in uniform on the field during a Major League Baseball game. The Giants won the game, 6-2.

While Nakken’s appearance in the coach’s box may have surprised some baseball fans, it didn’t really surprise Dan Rascher, director of academics for the master’s degree program in sports management at the Jesuit-run University of San Francisco, and a professor in the program.

“To an extent, it’s surprising: ‘Wow, the first woman to be on a major league baseball staff.’ But it’s not surprising that it would be her,” Rascher told Catholic News Service in a July 23 phone interview. Nakken was “a really strong leader and a very well-grounded student and person.”

Nakken — officially listed as an “assistant coach” on new Giants manager Gabe Kapler’s staff — took Rascher’s sports economics and finance course at USF. “I can’t give you her grade, but I thought she was an excellent student,” he said. “Her group students liked her. She was an excellent leader.”

Nakken, now 30, got her master’s degree from USF in 2015. Typically, most students in the program look for jobs or internships with professional teams, sports agents or stadium; Rascher estimates 20 alumni from the program work for the Giants in some capacity. But Nakken landed her job with the club a year before getting her degree.

“Usually by the time they get to me, which is eight months in, they tended to look for jobs or internships in the sports industry. But she was a go-getter, so she was already pretty successful,” Rascher said.

Since graduating, “she’s been very helpful for many students, both men and women, who are interested, essentially, in working in baseball. She’s been great,” Rascher said. 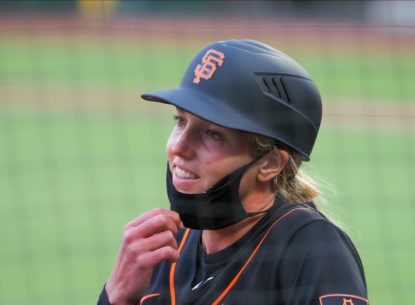 Alyssa Nakken, a coach with the San Francisco Giants, is seen at Oracle Park during an exhibition game against the Oakland A’s July 21, 2020. She is Major League Baseball’s first female coach. (CNS photo/Kelley L Cox, USA TODAY Sports via Reuters)

Nakken came to her new job naturally. She played first base for Sacramento State’s softball team 2009-12 and was a three-time all-conference selection, four-time Academic All American, four-time commissioner’s honor roll member, and the 2012 conference scholar-athlete of the year.

In her current role with the Giants, Nakken develops, produces and directs a number of the organization’s health and wellness initiatives and events. She has partnered with first base coach Antoan Richardson in overseeing outfield and baserunning instruction for the Giants.

During the preseason “summer camp,” Nakken often coached first base during intrasquad games at Oracle Park in San Francisco, where the Giants trained.

She has a uniform and is assigned number 92. But Major League Baseball rules limit the number of coaches in the dugout to seven, and Nakken was hired as an assistant coach after the other seven coaches were brought on to Kapler’s staff.

“Alyssa did a great job out there at first base today,” Kapler told mlb.com after the game. “Antoan stepped up and made sure that Alyssa continued her development as well.”

Soon after her hiring in January as an assistant coach, Nakken said, “I feel a great sense of responsibility. Coaching — I never saw it. This job has kind of been hidden for so long. I’m so excited to be in this role for the challenge and the opportunity to make an impact for this organization that I love. But also, I’m excited that now girls can see there is a job on the field in baseball. It’s really cool.”

NEXT: Local standout Phil Gosselin grateful for every day with Phils, MLB