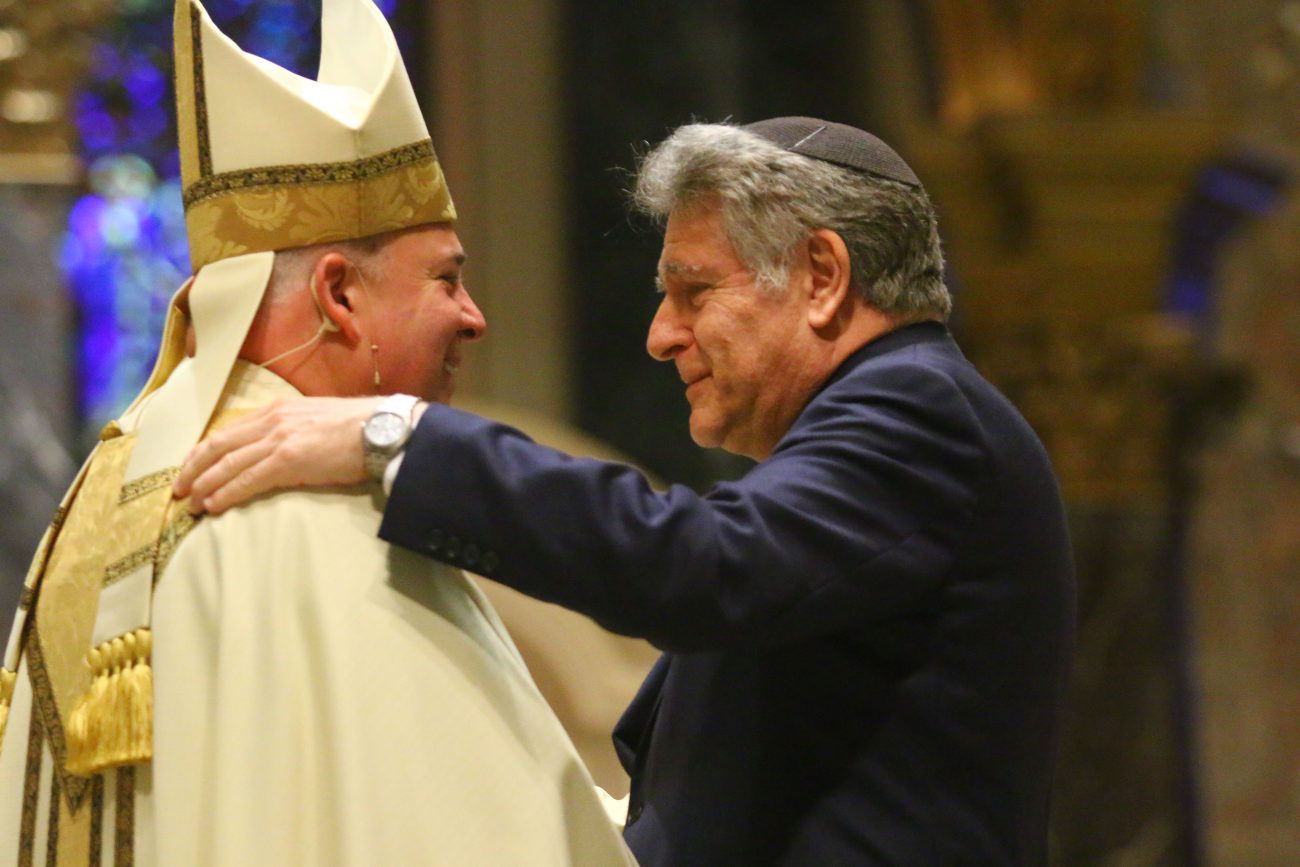 Rabbi Abraham Skorka greets newly installed Archbishop Nelson Perez during a Feb. 18 Mass at the Cathedral Basilica of SS. Peter and Paul. In a July 28 conversation hosted by the Institute for Jewish-Catholic Relations at St. Joseph’s University, Archbishop Perez and Rabbi Skorka surveyed the progress made in dialogue between the two faiths, and the hope both offer in addressing current challenges such as COVID-19, racism and antisemitism. (Photo by Sarah Webb)

Fifty-five years after the Second Vatican Council, Catholics and Jews continue to strengthen their relationship, as they respond to challenges such as COVID-19 and racism.

That’s according to Archbishop Nelson Perez and Rabbi Abraham Skorka, an acclaimed scholar and longtime friend of Pope Francis.

On July 28, Archbishop Perez and Rabbi Skorka sat down for a virtual conversation on “Catholics, Jews and the Issues of Our Time.”

The event was sponsored by the Institute for Jewish-Catholic Relations (IJCR) at St. Joseph’s University. Founded in 1967, the IJCR is the oldest university center of its kind in the U.S. created in response to the Second Vatican Council’s call for increased interfaith dialogue.

Co-sponsoring the webinar were AJC Philadelphia/Southern New Jersey, the Anti-Defamation League of Philadelphia, and the Jewish Community Relations Council of the Jewish Federation of Greater Philadelphia.

Moderated by IJCR directors and St. Joseph’s professors Philip Cunningham and Adam Gregerman, the hour-long dialogue surveyed both faiths’ perspectives on the coronavirus pandemic, institutionalized racism, antisemitism and the deepening interactions between Jews and Catholics.

At the start of the conversation, Archbishop Perez described himself as “a son of the Second Vatican Council and … Nostra Aetate.”

The 1965 document, whose title is Latin for “In Our Time,” clarified the Catholic Church’s relationship with non-Christian religions, and affirmed the “spiritual patrimony common to Christians and Jews” (Nostra Aetate, 4).

Having grown up with several Jewish friends, Archbishop Perez said his “world has been (that) of journeying together, walking together” with the Jewish community, whom he regards – in the words of Pope John Paul II – as the “elder brother” of Christians. 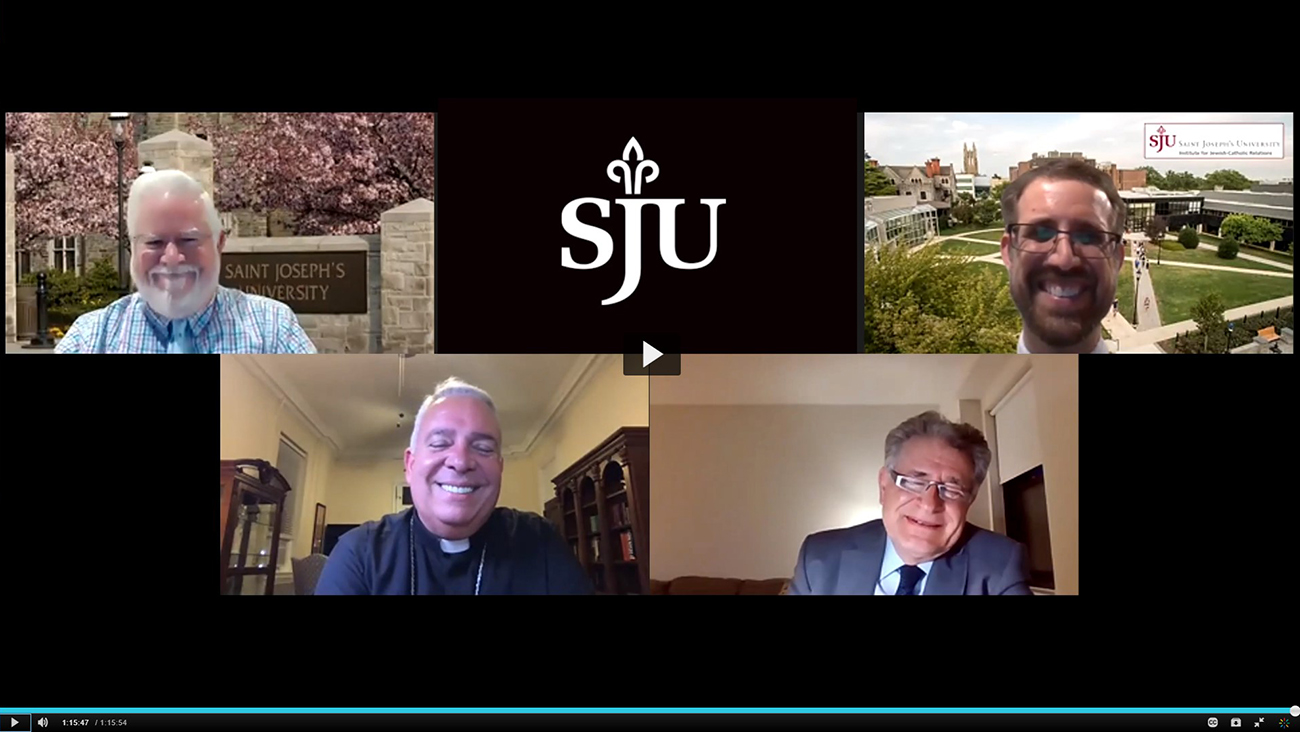 Rabbi Skorka agreed that the Second Vatican Council had advanced Jewish-Christian relations significantly after the centuries of opposition, violence and persecution that culminated in the Shoah (the preferred Hebrew term for the systematic massacre of Jews during World War II).

“The magnitude of … the Shoah, both in the number of people killed and much more in the degradation suffered, demanded a Christian response to Europe’s evident cultural and spiritual bankruptcy,” said Rabbi Skorka, adding that Nostra Aetate marked “the turning point in Jewish-Catholic relations.”

In his native Argentina, Rabbi Skorka worked with priests who helped to implement Vatican II reform – among them, then-Father Jorge Mario Bergoglio, the future Pope Francis, with whom the rabbi “carried out continuous and very significant work.”

The two collaborated on a 31-episode television show as well as the book “On Heaven and Earth,” and remain in close communication. The image of priest and rabbi engaged in “mutually enriching conversation … transmits understanding and peace,” while providing a paradigm for interfaith dialogue, said Rabbi Skorka.

He also listed a number of other milestones in the development of Jewish-Catholic relations, including the Catholic Church’s “requests for forgiveness … papal visits to synagogues … (and to) the Western Wall, the establishment of full diplomatic relations between the Holy See and the State of Israel,” as well as Pope Francis’ memorial visit to the tomb of Theodore Herzl, the founding father of modern Israel.

Speaking of his numerous visits to both Christian and Jewish sites in that nation, Archbishop Perez said, “When I go to Israel, I feel at home.”

Both the archbishop and the rabbi pointed to the Scriptures as a primary place of encounter (a key word in Pope Francis’ papacy) between Judaism and Christianity.

“Pope Francis stressed this point in Evangelii Gaudium,” said Rabbi Skorka, noting that in studying their shared sacred texts, both Jews and Christians “can learn together.”

In his own prayer life, the archbishop said he draws extensively from “the Psalms, the songs of the Chosen People.”

“There’s synergy there (between Jews and Catholics), because we share Scripture,” he said.

That affinity is particularly evident among Spanish-speaking Jewish and Christian communities, where the Scriptures have historically been “a natural place of encounter,” added the archbishop, who is of Cuban-American descent.

“Family and community and coming together is very important and very natural” in Latino cultures, said Archbishop Perez. “And that becomes an incredible platform that facilitates the bringing together of people in dialogue and moments of encounter, right where we are.”

Rabbi Skorka said that Argentina had long been home to pioneering efforts in Jewish-Christian rapprochement.

“What Pope Francis did as archbishop of Buenos Aires … (was) extraordinary (and demonstrated) a lot of courage,” said Rabbi Skorka. “We reached levels of dialogue and encounter unique throughout the world.”

The rabbi added that he and Archbishop Perez each count Spanish as a mother tongue, among the “many things in common” they have.

Work to do, together

Working together, Jews and Catholics can address critical issues such as COVID-19, systemic racism and antisemitism, said Rabbi Skorka and Archbishop Perez.

The coronavirus pandemic calls Jews, Christians and Muslims to unite in redressing the socioeconomic inequalities revealed by the contagion, said Rabbi Skorka.

“There are too many Americans whose incomes are minimal and marginal,” he said, while stressing that older adults are often dismissed as “collateral damage” amid the current health care crisis.

COVID-19 has also prompted believers to reflect on their faith and their values, said Archbishop Perez.

During a recent homily, he expressed hope that there would soon be “light at the end of this tunnel,” then asked listeners to reflect on “what is has been happening inside the tunnel (and) … what God is trying to communicate to us through all of this.”

Both Jews and Catholics have fought vigorously for racial equality and religious freedom — a task that continues, said Archbishop Perez.

“At the heart of it is the dignity of the human person,” he said. “We are created in the very image and likeness of God, and our dignity and rights flow from that.”

Summing up the July 31 conversation, Gregerman said that participants “should not forget … how unprecedented this type of Jewish-Catholic interaction is. … That we find ourselves here is something worth celebrating.”

Rabbi Skorka thanked Archbishop Perez for an “extraordinary opportunity” to exchange ideas, and that he hoped it was “the first of many other” such meetings.

Archbishop Perez agreed, adding in Spanish, “We’ll have to share a meal together.”

NEXT: Delco faith leaders march for justice in face of opposition