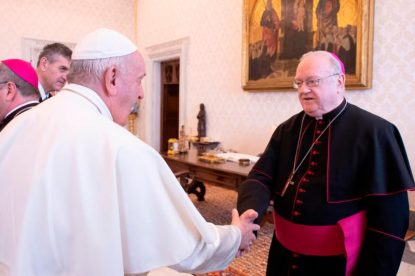 Pope Francis greets Bishop Dennis J. Sullivan of Camden, N.J., during a meeting with U.S. bishops from New Jersey and Pennsylvania in the Apostolic Palace at the Vatican Nov. 28, 2019. Citing dwindling revenues due to COVID-19, the Camden Diocese announce July 31, 2020, it is suspending its participation in the Independent Victim Compensation Program. (CNS photo/Vatican Media)

CAMDEN, N.J. (CNS) — Citing “a precipitous decline” in revenue due to COVID-19, the Diocese of Camden announced July 31 it is putting a moratorium on any future decisions or payments to abuse survivors through its Independent Victim Compensation Program.

“Awards already made by the IVCP administrators will be paid,” the diocese said in a statement.

The diocese “is fast approaching a point where it will not be able to continue to borrow the funds necessary to pay the amounts awarded by the program” because of the economic toll the pandemic is taking.

The moratorium on future payouts to survivors is “necessary in order to maintain the critical programs that the Diocese of Camden continues to provide for the communities it serves which, now more than ever, are so essential,” the diocese said.

In November 2018, the Camden Diocese along with the Trenton, Paterson and Metuchen dioceses and the Newark Archdiocese approved an independent compensation program to pay eligible victims who were sexually abused by clergy while they were minors in their localities.

The Independent Victim Compensation Program, or IVCP, is overseen by Kenneth Feinberg and Camille Biros, who are working on similar programs in the dioceses of New York and Pennsylvania, including the Archdiocese of Philadelphia.

The program provides victims with an alternative to litigation providing them with a non-adversarial process to resolve their claims with a significantly lower level of proof and corroboration than required in a court of law.

An Aug. 1 story in The Philadelphia Inquirer daily newspaper quoted Marci Hamilton, a lawyer for sex abuse victims, as saying: “All I can say is, God bless the victims. They were just told to hurry up and then wait, and now they’re going to have to wait even longer.”

To date, the Camden Diocese has paid out close to $7.6 million in awards determined by the program’s administrators. In addition, the diocese paid financial settlements totaling over $10 million from 1990 until last year.

In its July 31 statement, the diocese also said: “For nearly 30 years the Diocese of Camden has been committed to providing professional counseling to the survivors of child sexual abuse to assist in the healing process and, where it has been requested, to the survivors’ parents, spouses and children. Thus far, the diocese has expended nearly $1 million in providing such therapeutic assistance.”

Camden diocesan spokesman Michael Walsh told the Inquirer in an email the diocese “remains committed to providing compensation” to abuse survivors “when we are again able to do so.”

Another Catholic diocese that has to suspend payouts from its independent fund to compensate abuse survivors is the Diocese of Erie, Pennsylvania, which also cited the revenue hit diocesan investments and parishes have taken because of the pandemic.

The diocese suspended payouts in April, and according to news reports, about 40 claims there remain unresolved. Through the Independent Survivors’ Reparation Program begun a year ago, the Erie Diocese has paid about $6 million in claims to 50 abuse survivors.

PREVIOUS: Novena for end of pandemic begins this week