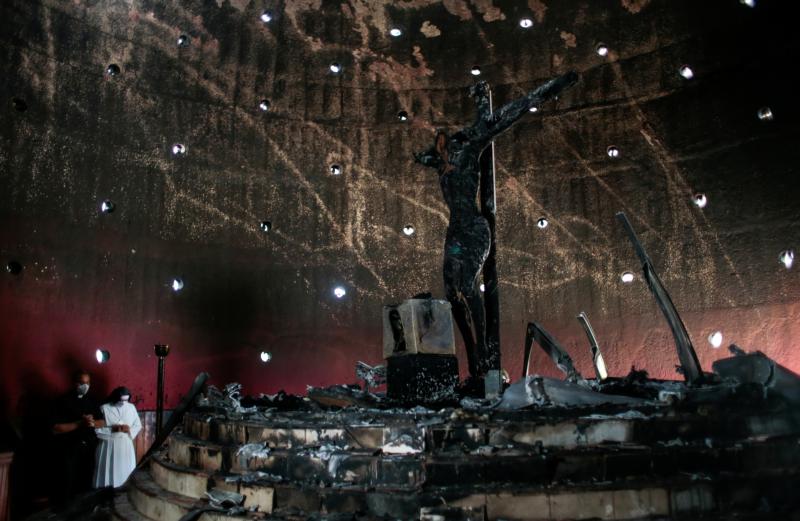 A priest and nun pray in the Blood of Christ Chapel at the Metropolitan Cathedral in Managua, Nicaragua, July 31, 2020, after the chapel was destroyed in an arson attack. Philadelphia-area faithful from Nicaragua said that the Sandinista government is ultimately behind this and other attacks as part of a campaign against the Catholic Church. (CNS photo/Oswaldo Rivas, Reuters)

Native Nicaraguan Catholics in the Philadelphia Archdiocese have denounced a July 31 attack on the cathedral in that nation’s capital as “evil.”

“I don’t know what else to call it,” said Rebeca Pérez, coordinator of evangelization and family outreach at St. Anthony Parish in Ambler. “I felt like someone died.”

On July 31, an unidentified hooded man threw a Molotov cocktail into the Chapel of the Blood of Christ at the Metropolitan Cathedral in Managua. The ensuing blaze destroyed a 382-year-old image of the crucified Christ.

Nicaraguan Vice President Rosario Murillo quickly suggested that the fire resulted from votive candles placed near the image, but Cardinal Leopoldo Brenes of Managua dismissed the assertion, noting that “there are no candles in the chapel.”

Cardinal Brenes told media that the suspect, who had been seen circling the cathedral more than 20 minutes prior to the attack, had “calculated everything.”

On Aug. 3 Archbishop Waldemar Stanislaw Sommertag, apostolic nuncio to Nicaragua, called for “a serious, careful and transparent investigation” of the matter by the Nicaraguan government.

The firebombing marks the latest assault against the Catholic Church in Nicaragua, where clergy critical of the Sandinista administration have been repeatedly targeted for physical violence and intimidation.

In 2018 widespread protests of President Daniel Ortega’s government resulted in “serious human rights violations,” according to the Inter-American Commission on Human Rights (IACHR). 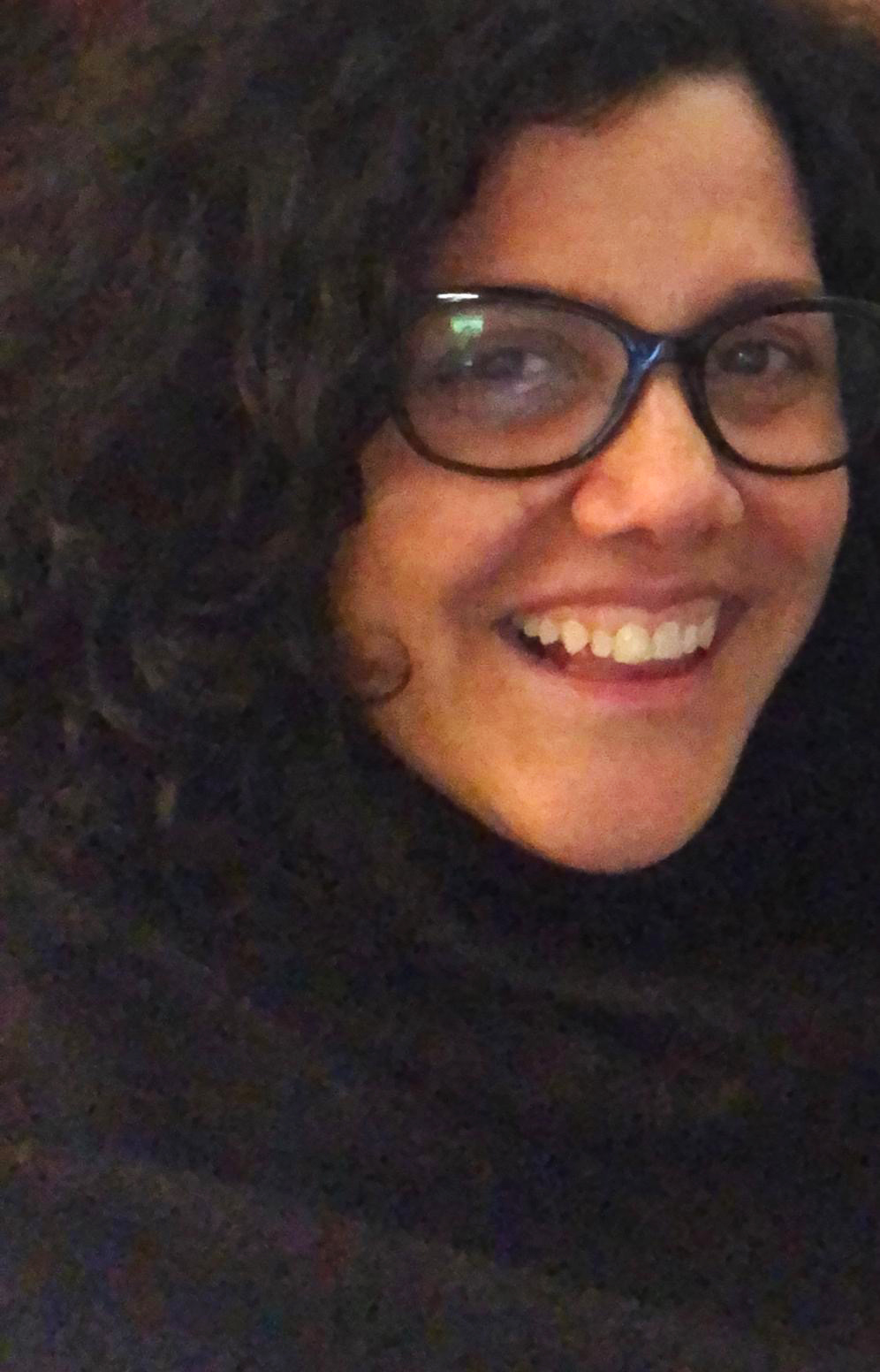 Rebeca Pérez, coordinator of evangelization and family outreach at St. Anthony Parish in Ambler, was detained by police in her native Nicaragua while wearing a t-shirt with an image of Our Lady of Guadalupe. (Photo courtesy of Rebeca Pérez)

That same year a U.S. State Department report listed numerous incidents of harassment, assault and death threats against Catholic clergy, along with vandalism and desecration of churches.

Vice President Mike Pence “repeatedly called on the government to cease violence and attacks on the Catholic Church,” the report noted.

“I would not be surprised if a couple of priests and bishops are killed in the next month,” said Nicaraguan native Father Cesar Izaguirre, parochial vicar at Our Lady of Grace Parish in Penndel.

A close friend and fellow priest in his homeland was beaten late last year, he said.

“This is the action of the devil,” said Father Izaguirre.

Several clergy have been forced to flee Nicaragua, including Auxiliary Bishop Silvio José Baéz of Managua, whom Pope Francis called to Rome in 2019 over fears for the bishop’s safety.

Lay believers are also at risk for practicing their faith, said Pérez, who herself was detained by law enforcement during a visit to family in Nicaragua last year.

“They stopped a taxi I was in and asked me to step out,” she recalled. “I was wearing a t-shirt with an image of Our Lady of Guadalupe, and I was a threat to them.”

The officers demanded that Pérez, now a U.S. citizen, show her passport, which they spit upon while denouncing her (amid a stream of vulgarities) as a “traitor,” she said.

“They didn’t let me go until I paid them” in response to their demand for money, said Pérez, adding, “if you’re not with them, you’re (considered) against them.”

While visiting her family Pérez was still able to attend daily Mass but said “you take your life in your own hands” by doing so.

“You feel this fear of being killed,” she said, adding that a priest friend had cautioned her about attending church while in the country.

Nonetheless, Catholics in Nicaragua are persevering in their faith, said both Pérez and Father Izaguirre.

“My sister was telling me that all of the parishioners (in her parish) are holding vigils and coming to stay there with the priests,” said Father Izaguirre. 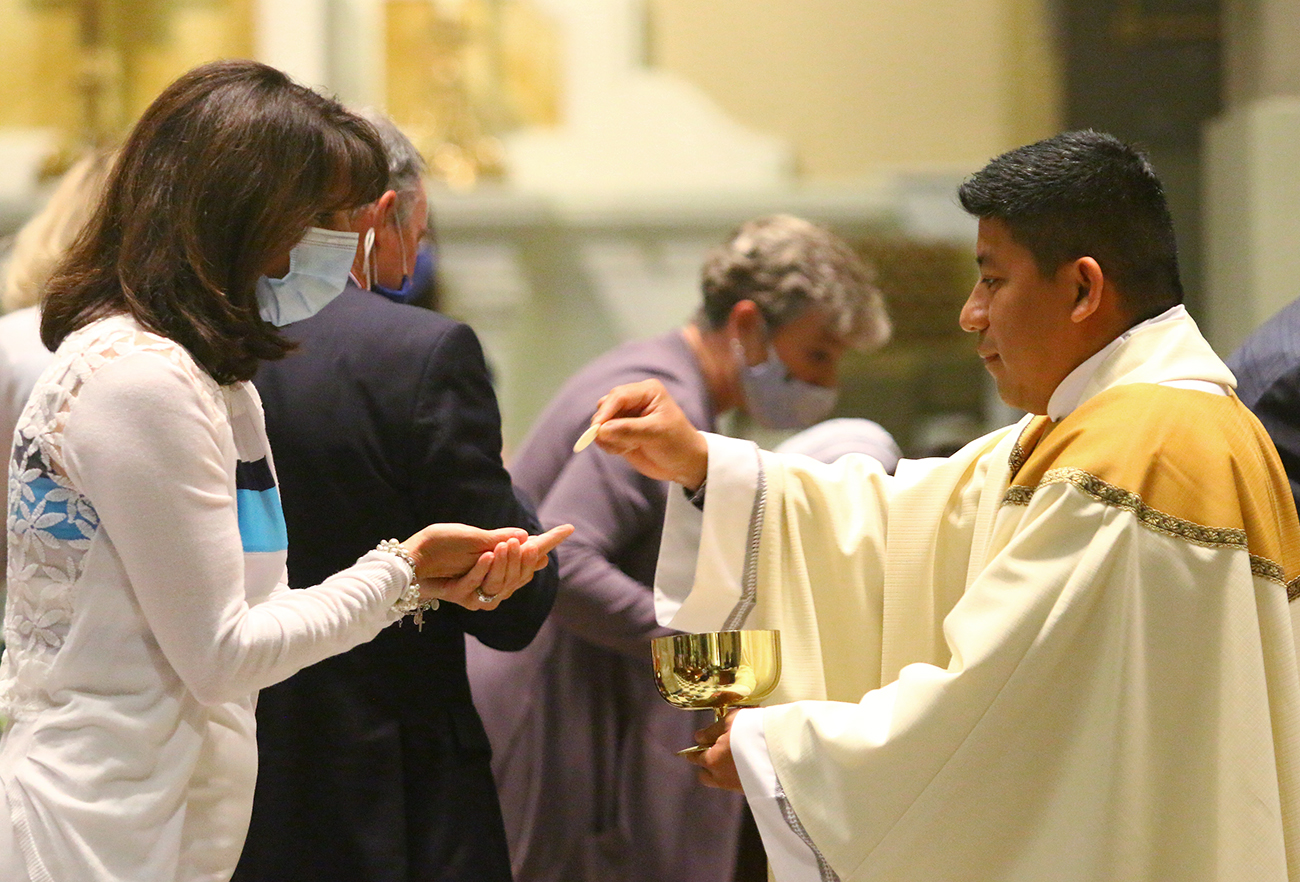 Father Cesar J. Izaguirre, seen here during the May 2020 Mass at which he was ordained, said that he is certain “priests, nuns, maybe a couple of bishops will die” as a result of continued attacks on Catholics in his native Nicaragua. (Photo by Sarah Webb)

Faithful “went to the streets and prayed the rosary in their own barrios,” said Pérez. “They stayed up all night guarding the Blessed Sacrament.”

Such devotion is even more remarkable given the impact of the COVID-19 pandemic on the already impoverished Nicaraguan population, said Father Izaguirre and Pérez.

The nation’s response to the disease has been criticized by experts as erratic and ineffective, with many deaths underreported and health precautions implemented only after government officials themselves fell victim to the illness.

Amid pandemic and persecution, faith will continue to sustain Nicaraguan Catholics, while empowering them to fight injustice and oppression, said Pérez.

“The people are no longer quiet in Nicaragua,” she said. “They take their faith very seriously, and they are willing to die for it.”

She and Father Izaguirre urged prayers for Nicaraguan Catholics as they face continued opposition and suffering.

“I’m sure people will die — priests, nuns, maybe a couple of bishops,” said Father Izaguirre. “This is how the primitive church lived. But if we have the conviction that God loves us, we know nothing will ever separate us from that love.”

At the same time, Pérez cautioned Catholics in this area not to take their own religious freedom for granted.

“The Nicaraguan people are teaching us something,” she said. “Are you willing to give everything up for your faith?”