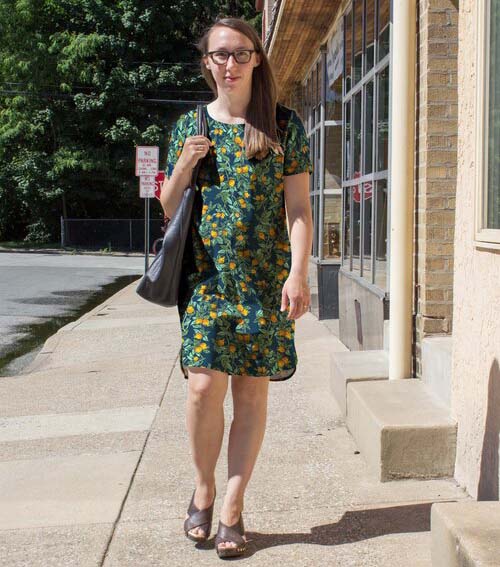 Holly Guertin, a textile and fashion designer, models “Abiding,” one of three prints in her new Zelie dress line, which weaves faith into the fabric design. (Photo courtesy of Holly Guertin)

A local fashion designer is weaving her Catholic faith into every aspect of her life, including her clothing label.

Holly Guertin, a textile designer who has worked with brands such as Lilly Pulitzer and Marie Oliver, launched a new line of women’s dresses July 27, with prints inspired by Scripture, stained glass windows and even holy Communion.

A member of Our Lady of Lourdes Parish in Philadelphia’s Overbrook section, Guertin said her “Ernie and Irene” collection’s premiere dress, the Zelie, is named for a French saint known for her fine stitching — St. Marie-Azelie (“Zelie”) Martin, the mother of St. Therese of Lisieux.

“I’ve always felt close to Zelie, since she was also a creative entrepreneur with a family,” said Guertin, who lives outside of the city with her husband and three sons. “Not only that, but her business was in creating lace textiles in a technique called Point d’Alencon for both civil and religious uses.”

Guertin said the “painstaking and beautiful process” of such lacemaking, along with Martin’s devotion to both her craft and her family, was “aesthetically and spiritually” moving.

The Zelie dress “was created with everyday, real life in mind,” she said.

“Abiding,” which features yellow and orange fruit, green leaves and a navy background, draws on “a tiny section of a stained glass window” at her parish church, said Guertin. The pattern also evokes Jesus’ call to discipleship in John 15:5, “Whoever remains in me and I in him will bear much fruit, because without me you can do nothing.”

“Fig Leaves” blends kelly green and mint images against a light pink background and terra cotta shadow – and recalls the account of Jesus cursing the fig tree (Mk 11:12-14, 20-25), a Scripture passage that “has always made me giggle,” said Guertin.

“We get a quick insight into Jesus’ humanity here,” she said. “He got frustrated. There are bigger themes at play, like how fig trees have always been a symbol for the Israelites, but in its simplest form, I feel so close to Jesus in this moment.”

The third design, though, actually grew out of a sense of separation from Christ. 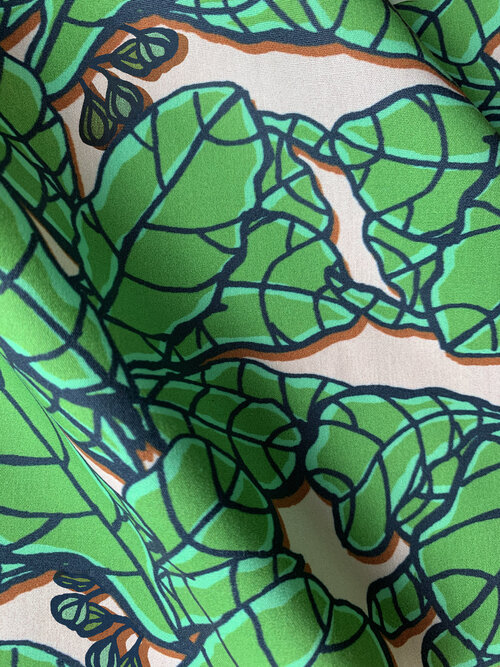 “Fig Leaves,” one of the three prints in designer Holly Guertin’s new Zelie dress collection, was inspired by the Scripture passage in which Jesus curses the barren fig tree. (Photo courtesy of Holly Guertin)

“Everything,” in which polka dots with small crosses fill a field of indigo, emerged from “love, adoration and longing for … intimacy with Christ” during the COVID-related suspension of public Masses when “we had no access to the Eucharist,” said Guertin.

In fact, the pandemic itself served as a catalyst for the dress collection.

During the early weeks of coronavirus lockdown, Guertin wore an inherited crucifix necklace to reassure herself of Christ’s presence. Encouraged, she realized “there’s a real benefit that can come from wearing certain objects or garments” and decided to launch her own line, she said.

The move was a natural extension for Ernie and Irene, a fiber art and textile design house that Guertin founded (using her and her husband’s middle names) in 2013, two years after graduating from the Savannah College of Art and Design.

Her sculptural wall hangings and surface designs, which embellish the aesthetics and function of an object, have been commissioned by her alma mater as well as private clients in the U.S., Hong Kong and France.

Guertin describes her creative process as “very natural” and one in which “the Lord provides so much.”

She sketches a basic image or motif — quite often suggested by an aspect of the Mass or her parish church’s interior — onto paper, using brush pens or watercolor inks to illustrate the designs. Guertin then scans them into her computer, recolors and repeats them to create a full pattern, and sends them out to a facility in her home state of North Carolina for printing on fabric.

Throughout the production phases, Guertin ensures that “sustainability and environmentally-minded practices” are in place.

“Our fabric is printed with biodegradable inks and onto natural fabrics,” she said, adding that the finished cloth is then sent to a factory in Georgia for sewing and shipping to customers. 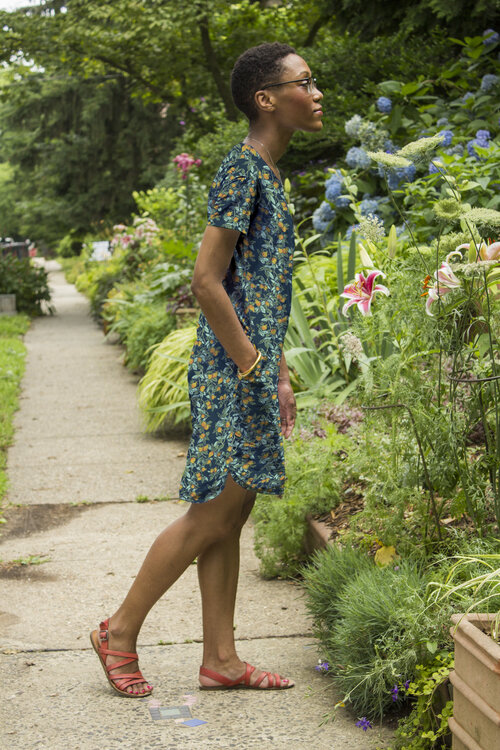 Although major fashion labels have been accused of exploiting underpaid garment workers, Guertin insists on partnering with vendors who ensure “a fair, living wage.”

Most consumers are not “aware of the work that goes into fabric and clothing production,” she said.

“The majority of the clothing we buy is made with little concern over the amount of waste it creates or the dignity of the laborers behind the garment,” she said. “I’m hoping to bring more awareness to this issue and provide an avenue, especially for Catholics, to act on their conviction on this issue.”

Those wishing to purchase the Zelie dress have a few more weeks to do so through Guertin’s website. Orders for the three printed Zelie dresses will close on Aug. 24, and the designs will no longer be available.

Guertin said she hopes those who purchase the dresses wear them in a spirit of “encounter” as well as reflection.

The patterns are a kind of church architecture in fabric form, she said.

“Compare a cathedral to a standard public building,” said Guertin. “The difference is that every surface of the cathedral is decorated, embellished, or textured. It brings us to an otherworldly space. It calls us to Eden.”