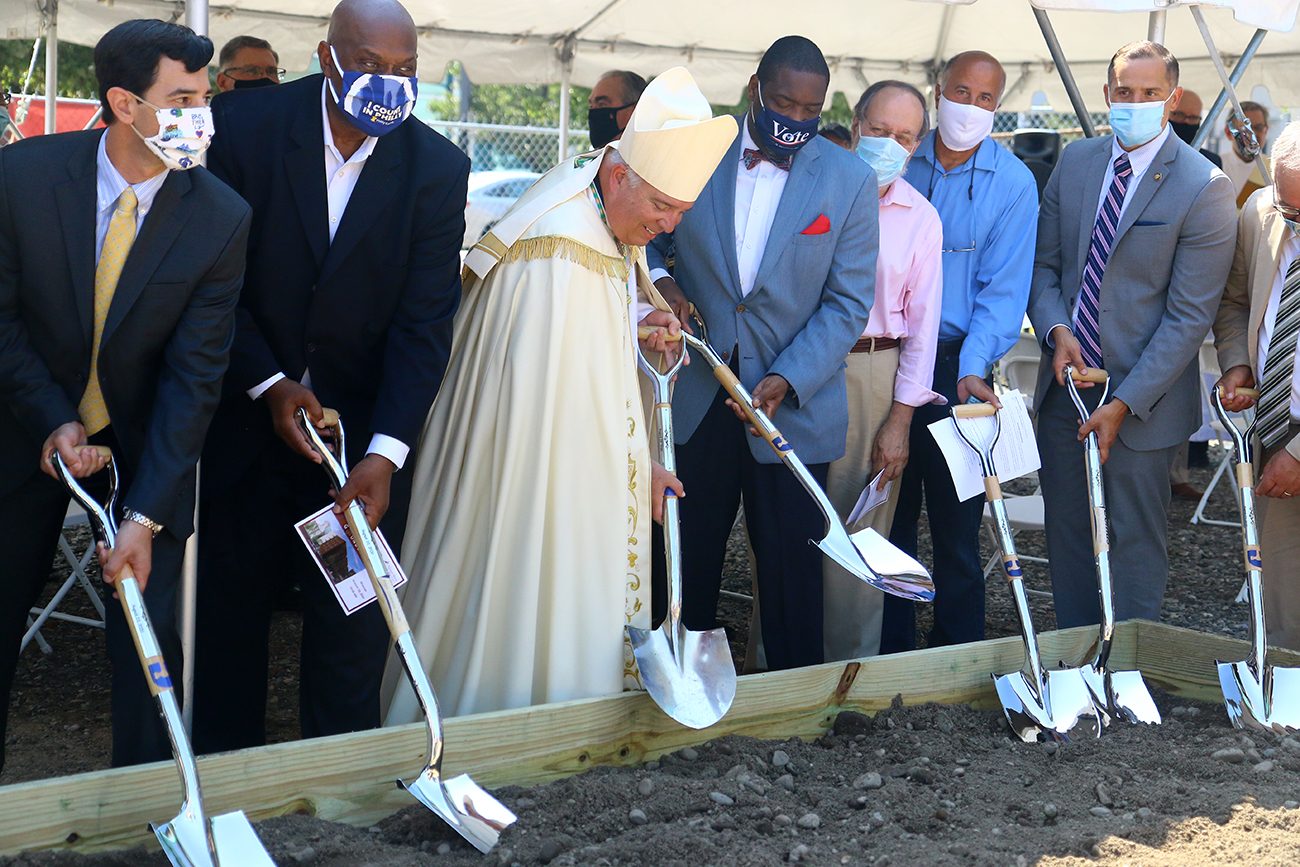 Government, business and church officials join Archbishop Nelson Perez, along with U.S. Rep. Dwight Evans (left of the archbishop) and Philadelphia City Councilman Kenyatta Johnson (to his right) in breaking ground for the St. Rita Place and Cascia Center development, a collaboration of Catholic Housing and Community Services of the Philadelphia Archdiocese, the Augustinian Fathers and numerous partners Aug. 10 at Broad and Ellsworth streets in South Philadelphia. (Photo by Sarah Webb)

Archbishop Nelson Pérez presided at an Aug. 10 groundbreaking ceremony for an affordable senior housing complex he called a “beacon of hope” in South Philadelphia.

Expected to open in the fall of 2021, the five-story St. Rita Place will provide 46 one-bedroom apartments for income-eligible adults aged 62 and older, with rental fees scaled to accommodate applicants’ resources. The residence will join five existing senior living sites developed by archdiocesan Catholic Housing and Community Services (CHCS), which offers a continuum of care to older adults throughout the archdiocesan area.

Located adjacent to the National Shrine of St. Rita on Broad and Ellsworth Streets, the $18.3 million structure will also include the Cascia Center, a 7,500-square-foot multipurpose space with office, conference and hospitality facilities for shrine pilgrims.

(Watch livestream video of the Aug. 10 groundbreaking ceremony for St. Rita Place and the Cascia Center.)

Shrine staff and the Augustinian Friars of the Province of St. Thomas of Villanova, who serve at St. Rita’s, will use the center for an array of counseling, educational and hospitality ministries designed to promote peace and reconciliation.

St. Rita, a medieval Italian widow and Augustinian religious, is a patroness of forgiveness and healing, having endured a difficult marriage and the deaths of her husband and sons.

The new complex in her honor has been 10 years in the making, and began “as a dream in (the) hearts and minds” of its creators to transform the surrounding neighborhood, said Archbishop Pérez.

CHCS executive director Heather Huot noted that the Augustinian friars had initiated the project, inviting her agency on board some six years ago.

Augustinian Father Michael Di Gregorio, prior provincial of the St. Thomas of Villanova Province, “had the vision to create the Cascia Center to further the reach of St. Rita’s … healing charism,” said Huot.

The path to the groundbreaking was a long one due to the financing and endorsements required, she said.

“When you’re trying to get funding for a project like this, it’s a very competitive process,” said Huot, noting that city, state and federal officials — many of whom were on hand for the groundbreaking — were essential to the realization of the project.

Last year the St. Rita Place complex, which will be built by Domus Construction, was awarded a tax credit allocation of approximately $12 million by the Pennsylvania Housing Finance Agency (PHFA). Additional financing has since been provided by RBC Capital Markets and Capital One, with assistance from the City of Philadelphia, the National Housing Trust Funds, the Federal Home Loan Bank of Pittsburgh Affordable Housing Program Funds and a private investment.

The National Shrine of St. Rita of Cascia contributed $1.4 million toward the cost of constructing the Cascia Center. The Archdiocese of Philadelphia and the St. Rita shrine have donated the land for the development.

In her remarks, Huot also thanked Joseph DeFelice, regional administrator for the federal Housing and Urban Development agency (and a graduate of St. Matthew Parish School in Philadelphia) for his ongoing support of CHCS’s senior residences.

In addition to obtaining funding and regulatory approval, said Huot, securing the trust of area residents has been critical to the task.

“You want to make sure your project is something the community embraces,” she said.

That community, like the nation itself, is rapidly aging. According to the U.S. Census Bureau, those aged 65 and older will outnumber children under the age of 18 by 2034, and by 2060, nearly one in four Americans will be at least 65 years old.

However, many more are desperately needed, due to an overall lack of affordable senior housing that has become “a national crisis,” said Gregory Heller, senior vice president of community investment at the Philadelphia Housing Development Corporation and executive director of the Philadelphia Redevelopment Authority.

Heller cited several “sobering statistics” with regard to the Philadelphia area, which he said has a 26% poverty rate, with over half of the city’s renters “cost burdened,” meaning they are spending more than 30% of their income on rent.

Philadelphia “ranks 71 out of 100 large metropolitan areas in terms of affordability for renters,” he said. 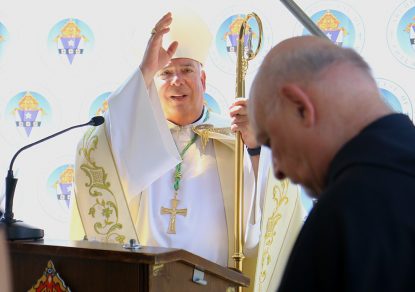 At the same time, median incomes in 15 of the top 25 occupations employing Philadelphia workers “are too low for a single person to afford a one-bedroom apartment,” said Heller.

Some 19,000 eviction proceedings are filed in the city each year, he added, and the Philadelphia Housing Authority has more than 68,000 households on its waiting list for affordable housing.

CHCS social services coordinator Caroline Morgan said her office “had been receiving calls for years from seniors in Philadelphia who had heard about the plans for St. Rita’s.”

While Philadelphia’s real estate market has boomed in recent years, area seniors “fear they will be displaced” by rapid development, said City Councilmember Kenyatta Johnson, who had also supported the building of CHCS’s St. John Neumann Places I and II senior residences in South Philadelphia.

“(These) are projects that allow people who grew up in South Philadelphia to stay in the neighborhood they grew up in,” said Johnson.

“I’ve been looking forward to this for a long, long time,” said Pollizzotto, his eyes filling with tears. “It’s very emotional.”

As a volunteer at the shrine, he said he had “parked so many times” in the lot on which the new complex will stand, noting he had also attended the former St. Rita’s school that had previously occupied the space.

“To see the building finally getting ready to go up, that’s like almost heaven,” he said.

Archbishop Pérez said that the project “creates communities where residents care for one another and become and extended family, so that no one feels alone.”

That mission has taken on new urgency “during this time of unrest and turmoil,” he said, with St. Rita Place and the Cascia Center providing a holistic response to current challenges.

Reflecting on the Gospel passage proclaimed at the Aug. 10 ceremony, which recounted the transfiguration of Jesus (Mt 17:1-8), Archbishop Pérez repeated the words Peter spoke on seeing Christ in his glory: “It is good to be here.”

“Those words are going to resonate in the hearts of senior citizens residing here a little over a year from now,” said Archbishop Pérez. “When they’re up there in their rooms, and they’re saying at night as they put their heads against their pillows, ‘It is good to be here.’” 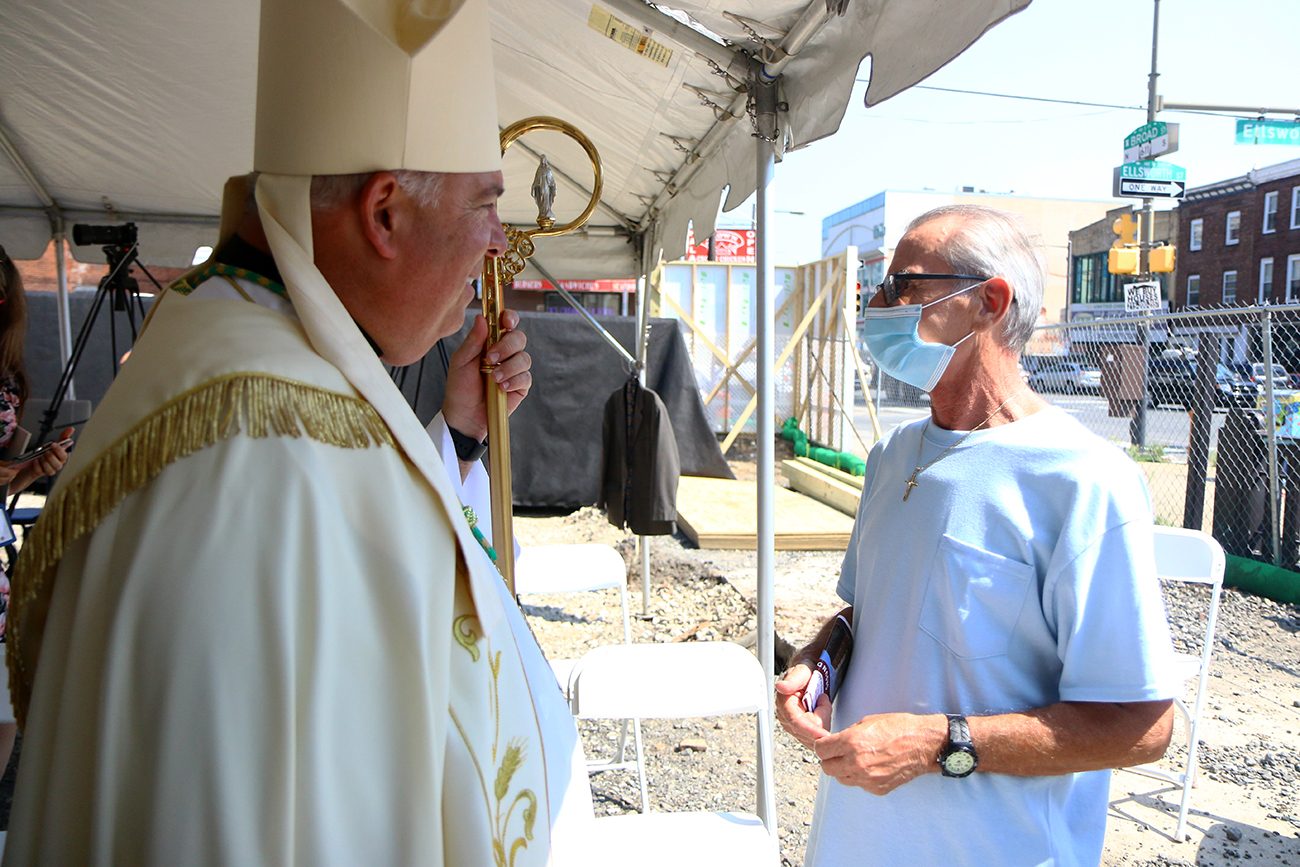 Archbisop Perez speaks with Frank Pollizzotto, a South Philadelphia resident and volunteer at the St. Rita Shine about the long-awaited project to build senior housing and a community center adjacent to the shrine in South Philadelphia. (Sarah Webb)