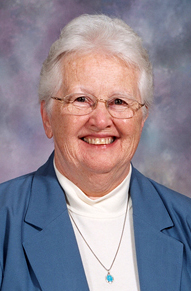 Sister Mary Catherine Gurley, O.S.F. (formerly Sister Margaret Patrice), died Aug. 6 in Assisi House, Aston at age 77. She had been a professed member of the Sisters of St. Francis of Philadelphia for 57 years.

Sister Mary Catherine was born in Boston, Massachusetts. At the time of her entrance into the congregation in 1960, she was a member of St. Mary of the Angels Parish in Jamaica Plains, New York. She professed her first vows in 1963.

Sister Mary Catherine earned a B.A. in English from Neumann University, an M.A. in supervision and administration from Rider College and a doctorate of education from the Catholic University of America.

She ministered primarily in education and administration. She also published a number of articles for various publications and played a significant role in the publication of the congregational history for the Sisters of St. Francis of Philadelphia.

Sister Mary Catherine ministered for 13 years in the Diocese of Trenton. She taught at St. Raphael School and later served as principal at Immaculate Conception School. She served as a member of the provincial council for the former St. Anthony Province which was based in Trenton.

In later years she served as dean of the School of Education at Georgian Court University in Lakewood. During her five years in the Diocese of Metuchen, New Jersey, she taught at St. Augustine School in Kendall Park.

Additional ministry took Sister Mary Catherine to the Archdiocese of Boston where she worked in development and fundraising at Blessed Sacrament Parish in Walpole and as a writing instructor and continuing education counselor at Stone Hill College.

During her years in the Diocese of Portland, she served as director of the Franciscan Renewal Center. In the Diocese of Paterson, she ministered as the administrator of Mount St. Francis Convent in Ringwood.

During her 18 years in the Archdiocese of Philadelphia, Sister Mary Catherine served for nine years as administrative vice president of Neumann University. In later years she returned and served in local house ministry at Our Lady of Angels Convent and, in 2012, moved to Assisi House where she served in prayer and hospitality ministry until her death.

Funeral services will be held in Assisi House Aug. 13 and will be private. Burial will be in Our Lady of Angels Cemetery in Aston. A memorial Mass will be held at a future date.

Sister Mary Catherine is survived by two brothers, Frank and Jim Gurley, and by her Franciscan family.

NEXT: Cardinal Jaworski, once a ‘secret cardinal,’ dies at 94