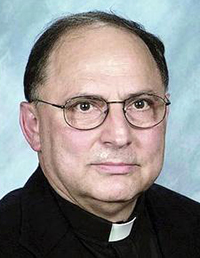 Father Ronald J. Ferrier, 80, a teacher of Latin and physical science at the former Cardinal Dougherty High School in Philadelphia, died suddenly Aug. 2. He was 80.

Born April 16, 1940 in Norristown, he was the son of the late Jeremiah Ferrier and Margaret (Fulginiti) Ferrier.

He attended St. Matthew School, Conshohocken and St. Matthew High School (later Archbishop Kennedy High School). He then entered St. Charles Borromeo Seminary and was ordained at the Cathedral Basilica of SS. Peter and Paul on May 18, 1968 by Cardinal John Krol.

His first assignment was as parochial vicar at St. Isidore Parish, Quakertown followed by his assignment as a teacher at Cardinal Dougherty, where he would remain for four decades until it closed in 2010. During that time for six years he was in residence at Visitation B.V.M. Parish in Philadelphia, followed by seven years at Our Lady of Consolation, Philadelphia and for 27 years at the Provincial House of the Sisters of the Holy Family of Nazareth, Philadelphia, where he served as chaplain.

“He was a good man, so good, and an excellent priest,” said Sister Celine Warnilo, C.S.F.N., a former congregation superior. “Nothing was too much for him and I never heard him say an unkind word. He never talked about himself, you were there to talk to.”

After Cardinal Dougherty closed, Father Ferrier took up residence at St. Katherine Parish in Torresdale, Philadelphia, first as a parochial vicar until his retirement at 75, but remaining in residence until his death.

Msgr. Paul Kennedy, who is the pastor of St. Katherine, is also a former president of Cardinal Dougherty High School and remembers Father Ferrier in those years as well as his years at St. Katherine.

“He was a nice guy, people liked him very much,” Msgr. Kennedy said. “He was a bit shy, but people brought out the best in him. He was known for his short homilies, mostly drawn for the Psalms.

“The priest faculty at Cardinal Dougherty enjoyed his company and people in the house enjoyed his company. He was a great story-teller, not about himself, but on himself. He was very spiritual and very well read on many topics including theology and history.”

While Father Ferrier had a great love for the liturgy and the celebration of the sacraments, his avocation was gardening, taking care of the flowers and growing vegetables at St. Katherine, according to Msgr. Kennedy.

There will be a viewing for Father Ferrier at St. Katherine Church on Thursday, Aug. 6, beginning at 9 a.m. followed by his 11 a.m. funeral Mass celebrated by Bishop John J. McIntyre.

Among the concelebrants will be Msgr. Thomas A. Murray, Father David Buffum, Father William Monahan, Msgr. Thomas Murray and Msgr. Kennedy, who will be the homilist.

Father Ferrier is survived by his brother, Jerry Ferrier; a sister, Mildred Ferrier and a nephew, Nick Ferrier.

Entombment will be at St. Matthew Cemetery, Conshohocken.