When the Archdiocese of Philadelphia communicated earlier this week that fall sports would not take place because of continued concerns regarding the global COVID-19 pandemic, reactions from coaches and players were mixed with shock, disappointment, anger, confusion, understanding and a hope that something could be done in the spring to allow traditional fall sports to be played sometime during early 2021.

“We recognize that this news is disappointing to many of our students, families and coaches, particularly our seniors,” said an Aug. 24 announcement from the Office of Catholic Education and Faith in the Future. “It saddens us greatly as well. We recognize the value of athletics as part of our educational philosophy that seeks to provide for the holistic formation of young men and women of character. This is not the scenario any of us desired.

“We have an obligation to protect all those entrusted to our care. Athletics could not be treated separately, and it fell to us to make this decision in a manner consistent with everything else done to this time. Given the nature of athletic competition and the manner in which COVID-19 is transmitted, there is currently no way for us to reasonably provide for the health and safety of student-athletes as well as those with whom they come into contact.” 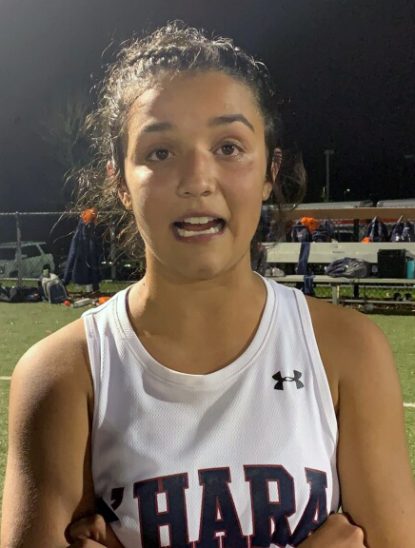 Cardinal O’Hara junior Mia Scarduzio, a multi-sport student athlete, is staying positive and hopeful for some part of a fall sports schedule, including field hockey, to be played in spring of 2021 in addition to Catholic League spring sports. (Photo by John Knebels)

Should the archdiocese ultimately feel comfortable providing opportunities for fall sports moving to the spring of 2021, multi-sport athletes such as Cardinal O’Hara junior Mia Scarduzio – a field hockey and lacrosse standout – would find themselves in a quandary.

Which sport should they play? How would that affect their social standing, being forced to choose one team over another? Given the extraordinary circumstances, would it be possible for an athlete to play two sports simultaneously?

That said, fall athletes would be beyond grateful if they were afforded an opportunity to at least compete for a couple of months rather than nix playing altogether.

“We are all very disappointed,” said Scarduzio. “I hope this all works out. My friends and I will be together working on our stick skills until the time comes to play. I’m looking forward to what the spring has to bring for my field hockey team and hopefully we come on top again and win the PCL two years in a row.”

Scarduzio is taking things day by day before making a definitive plan.

“As of right now I cannot make that decision,” said Scarduzio. “However, I have full faith in the PCL that they will figure out a plan that is conducive to not only field hockey and lacrosse, but the CDC guidelines in giving us our season. I am excited to see where this new journey takes us, and I cannot wait to be back on the field with both teams soon.

“This is out of my control. I’m going to do the best I can to keep my spirit up and practice at the same time and hopefully this will be resolved sooner than later, and we can all get back to playing the sport that we love so much.”

Senior Meredith Hannigan, who also plays softball, said she would remain prepared and “use this big adjustment to motivate me to keep practicing to come out that much stronger.”

Sophomore Maeve Boston, also a softball player, had high hopes when the Pennsylvania Interscholastic Athletic Association (PIAA) announced last week that schools would be permitted to play despite Gov. Tom Wolf’s request that schools suspend all sports until Jan. 1, 2021 at the earliest.

“When the PIAA approved the playing of fall sports, it was really exciting for our whole team, and we started preparing to come back even stronger than last year,” said Boston. “So obviously, when I heard the news it was really upsetting, and I can’t imagine how hard it must be for our seniors.

“However, although the situation is not ideal, I am thankful that there is still a plan to play in the spring season. I believe our team will come back better than ever and hopefully bring another championship to Cardinal O’Hara.” 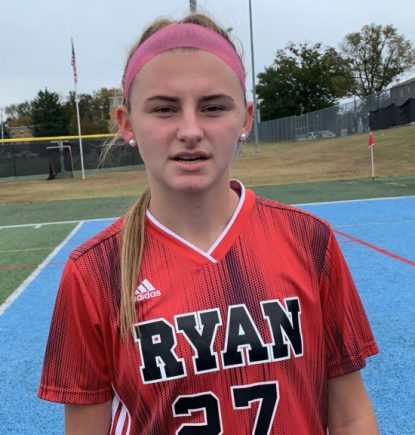 Archbishop Ryan girls are also motivated to defend their soccer championship. While Ragdolls’ junior Kaitlyn Brace understands that the health of everyone is the primary goal, she experienced an emotional roller coaster in the matter of a few days.

“It was heartbreaking to get the news that we would not be having a fall season, especially being told a couple days prior we were having one,” said Brace. “We followed all the rules during summer and did all we could to prepare for this season.

“I’m very upset with this decision, but I hope we do have a season in the spring so all the seniors have their last season they deserve.”

“When I heard the season was pushed back, I was devastated,” said Collier. “I’ve waited four years to finally be at the top as a senior, and it’s being torn right from my hands. I think if Archbishop Wood and other archdiocesan schools are allowing kids back in the building, it’s outrageous that fall sports shouldn’t be able to proceed. I’m hopeful that the decision might be overturned, but if not, I just hope we’ll be able to play in the spring.”

Defending football champion St. Joseph’s Prep (along with La Salle) has discussed the possibility of playing an independent schedule since they are not among the 17 archdiocesan high schools.

If they should do so and the archdiocese allows football to be played in the spring, however, perhaps they would not be able to compete in the spring should there be football.

“Whether the season is played in the fall or the spring, our goal as a team is the same – win a state championship,” said senior center Max Fisher. “No matter when the season will be played, the season is going to be different; however our standard is where it has always been.” 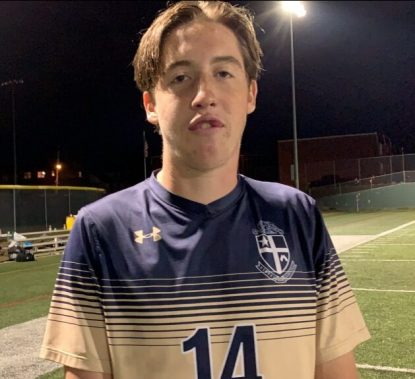 La Salle senior Ben Herron, whose Explorers captured last year’s soccer crown, is banking on the archdiocese devising a plan for all athletes to be somewhat satisfied by the end of the school year.

“Even though the news was discouraging, the guys are just happy to have a chance of playing again, especially our seniors who will be graduating this year,” said Herron. “All of the uncertainty is hard to deal with, but we just have to keep practicing and trust that we will have a chance to play.”

Mentors such as Roman Catholic’s longtime soccer coach Ray DeStephanis fully understand the range of emotions that emanated from the archdiocese’s decision.

Like the players, adults were also hoping to be out practicing this week while strategizing for their season’s first opponent. Priorities, however, take precedence.

“First and foremost, we want to make sure we keep our players and staff, their families and spectators safe,” said DeStephanis. “We have all been touched by COVID-19 in some way through loss, illness or economically. So, if it makes sense to wait it out until spring out of an abundance of caution … then that’s what we do.

“We still, of course, would rather be prepping for a season-opening weekend in Wildwood right now, but again, these are tricky times to navigate. We all hope for better times, and quickly. It’s important to the physical and mental health of our players, especially our upperclassmen. Let’s hope and pray we can see each other on the field of play in the spring of 2021.”