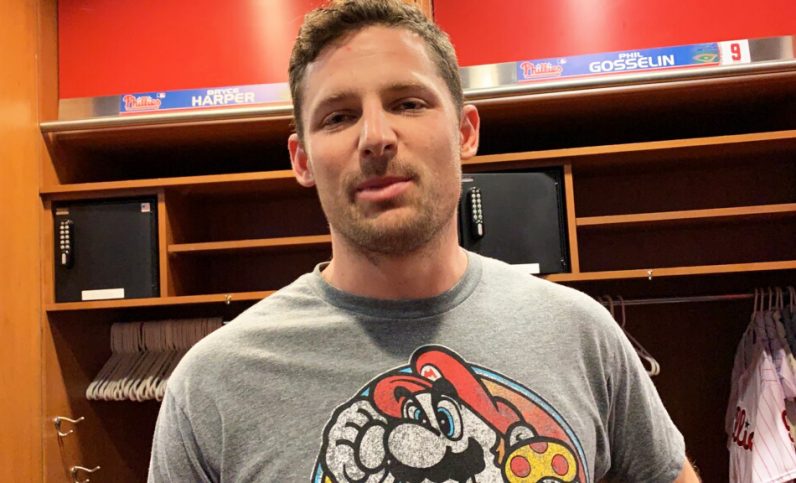 Phil Gosselin talks about his Major League Baseball career and especially his time now with the Phillies, which he followed as a West Chester Native and Malvern Prep grad, after the 2019 Phillies’ season finale. (Photo by John Knebels)

Beloved by countless Malvern grads, Chinici was asked what he remembered about 2007 alum Phil Gosselin, who for the past two seasons has played for the Philadelphia Phillies and has been in Major League Baseball for eight straight seasons. 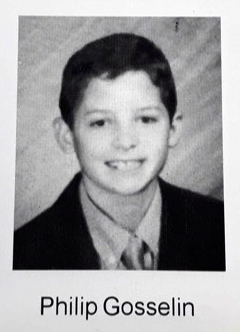 “I taught Phil history in sixth grade (2000-2001),” said Chinici, talking like it was just yesterday that he met a kind, unassuming 12-year-old. “Excellent ‘A’ student and more importantly, a great young gentleman. Always respectful to adults and fellow students, as he was highly respected by them.”

Last Saturday, playing before precisely zero fans at Citizens Bank Park thanks to the ongoing coronavirus pandemic, Gosselin slugged two home runs to lift the Phillies to a 7-1 win over the visiting Miami Marlins. It was the Phillies’ only victory in the season-opening three-game series.

Thanks to television and the Internet, however, Gosselin’s family and friends were undoubtedly thrilled to watch the affable 31-year-old utility standout slam a first-pitch, two-run homer in the sixth inning to break a 1-1 tie, and then end the scoring with an eighth-inning blast to help make a winner of highly touted free-agent acquisition Zack Wheeler.

“He made me look very smart today,” said Girardi, referring to starting him at designated hitter over Jay Bruce, “for which I am grateful.”

Gosselin has engineered a solid professional career. After starring at Malvern as a two-time, first-team All-Inter-Academic League shortstop and forging numerous top-10 records at the University of Virginia, the West Chester native who was born in Bryn Mawr was drafted by the Atlanta Braves in the fifth round of the 2010 MLB draft.

After making his debut with the Braves on Aug. 16, 2013, the infielder/outfielder bounced around from Atlanta to Arizona to Pittsburgh to Texas to Cincinnati and back to Atlanta before signing with the Phillies last year.

“You have a bad game, it’s not the worst thing in the world,” said Gosselin, as he stood in front of his locker after the 2019 season finale. “It’s tough because you have to perform to stay here, but I’m trying to make the most of it and enjoy it every day because you never know when it’s going to end.”

As a Phillie, Gosselin led the team in pinch hits with 10 (he led all of baseball in 2016 with 20 pinch hits as an Arizona Diamondback) and finished with a solid .262 batting average while playing six games in left field, five at shortstop and one at third base.

For his career, Gosselin has accrued 650 at bats with 161 hits, 41 walks and six hit by pitches for a solid batting average of .267 and a more-than-respectable on-base percentage of .317. He has slugged nine home runs, scored 80, knocked in 45 and stolen seven bases.

In 257 chances defensively, Gosselin has amassed a splendid .977 fielding percentage.

“I’ve been lucky to play this long and hopefully I got a few more years left in me,” said Gosselin. “You have to enjoy every day, because you don’t know when your last year is going to be.”

Gosselin still maintains ties with Malvern Prep, where he also played varsity basketball. He credits his alma mater for helping him mature into a well-rounded person with a team-first attitude and daily gratitude.

“Brotherhood, really,” said Gosselin. “I’m still really close with a handful of the guys I went to school with there. There’s a bond. Life kind of pulls you in different directions when you get older, but we still have that and we still keep in touch. I think it’s pretty special. I’m not sure if most high schools have that. We’ve been able to keep that close friendship over the years.”

Gosselin, who was part of two shared Inter-Ac titles at Malvern, faithfully follows the Friars’ athletic exploits and is “really happy but not surprised” by the baseball program’s eight Inter-Ac titles (two shared) since he graduated.

“Coach Freddy Hilliard does a great job there and has been churning out a lot of really good players,” said Gosselin. “It’s definitely a source of pride when you see how good the team is doing and all the good players coming out of there.”

As for making the Phillies after a scalding hot hitting display coming out of the three makeshift summer exhibition games and intra-squad contest in middle-through-late July?

“It’s been awesome,” Gosselin told pool reporters after his career game against the Marlins. “I was just hoping to make the team out of camp. I knew it was going to be an uphill battle and I’d really have to play well and force their hand a little. I was able to do that.”