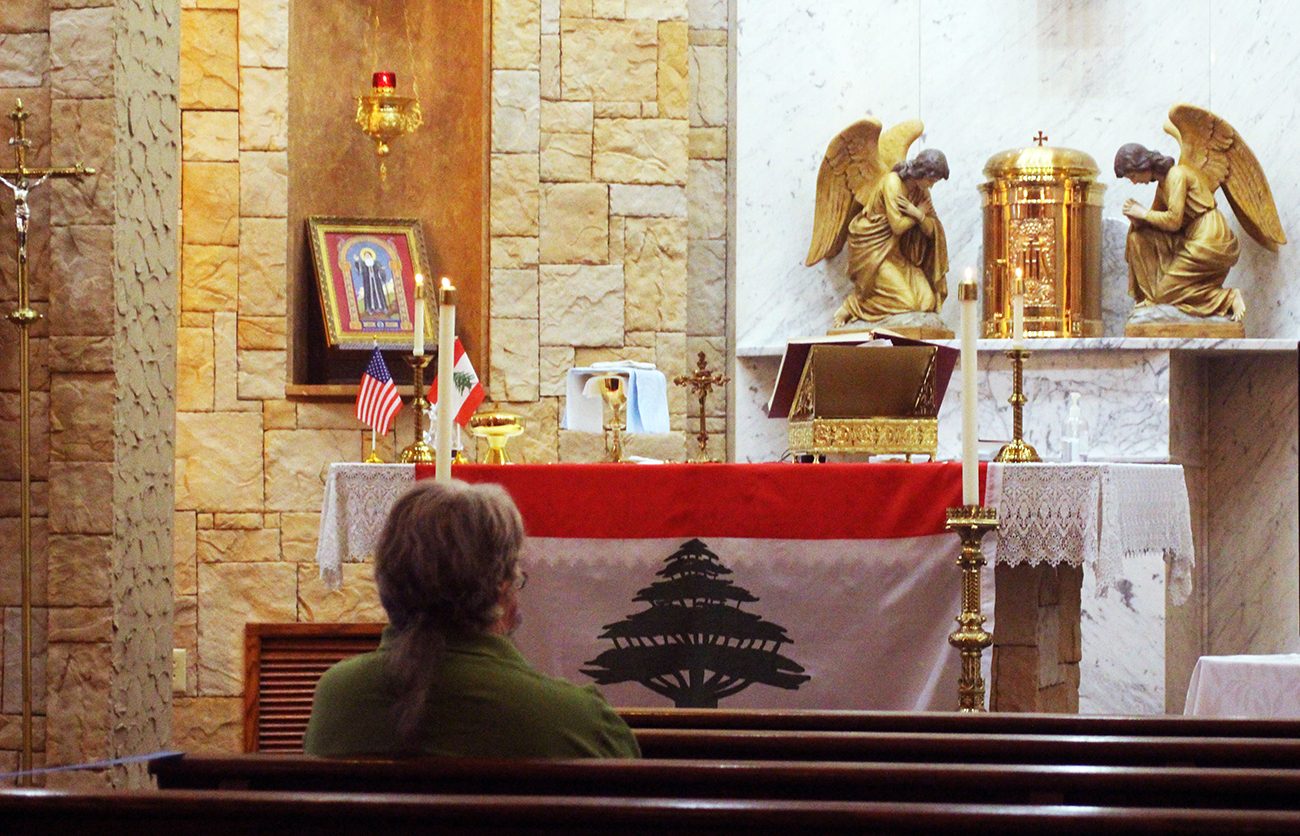 A woman prays before a Sept. 4 liturgy celebrated at St. Maron Maronite Catholic Church in Philadelphia, which marked the one-month anniversary of a deadly Aug. 4 explosion in Beirut, Lebanon. (Photo by Gina Christian)

A month after a deadly explosion rocked Beirut, local Catholics continue to pray for healing and restoration in Lebanon.

Some 20 parishioners of St. Maron Maronite Catholic Church in South Philadelphia gathered Sept. 4 for a liturgy on behalf of the Middle East nation.

Earlier that week, Pope Francis had called for Sept. 4 to be observed as a universal day of prayer and fasting for Lebanon, whose longstanding political and economic dysfunction was intensified by last month’s tragedy.

The massive Aug. 4 explosion, which killed more than 170 people and wounded at least 6,000, is believed to have been caused by ammonium nitrate improperly stored at that city’s port.

Some 300,000 have been left without shelter in the wake of the blast, and according to the International Rescue Committee, COVID-19 cases have since increased by an estimated 220%.

Sorrow has increasingly merged with outrage, with many Lebanese saying the explosion directly resulted from longstanding government corruption and neglect.

Although “we quickly forget everything” amid a 24/7 news cycle, he said, “we should never forget what happened; we should not forget the disaster, the innocent people who lost their lives, the injured and those who were displaced from their homes.”

Founded by priests of the Maronite Eparchy in Antelias, the organization has been working to feed impoverished families in Beirut’s suburbs. Since the explosion, the number of clients has exceeded 1,000 per day.

The effort raised some $7,200, said Father Chebli, with the parish matching $2,000 of the contributions. The total will cover just under two months’ worth of supplies for the outreach.

At the same time, said Father Chebli, sustained international assistance is needed to ensure Lebanon’s future as a nation.

Many youth are leaving and “throwing away their passports” in despair, while “their parents are crying,” he said.

In his Sept. 2 general audience, Pope Francis urged residents of Beirut to remain and rebuild, and not to “let the dream … of a beautiful and prosperous country slip away.”

The nation has been consistently cited by Pope Francis, Pope John Paul II and Pope Paul VI as a model for cultural and religious exchange. In a 1989 apostolic letter, Pope John Paul II described the country as “a message of freedom and an example of pluralism for both East and West.”

Lebanon’s past offers hope for its future, said Father Chebli.

“It’s time to look back at the history of Lebanon, the history of its saints, the history of the church, from 2,000 years till today,” he said, noting that while Lebanon’s restoration would be difficult, “with the grace of God it’s possible.”

NEXT: Ministry asks faithful to step up for addiction recovery