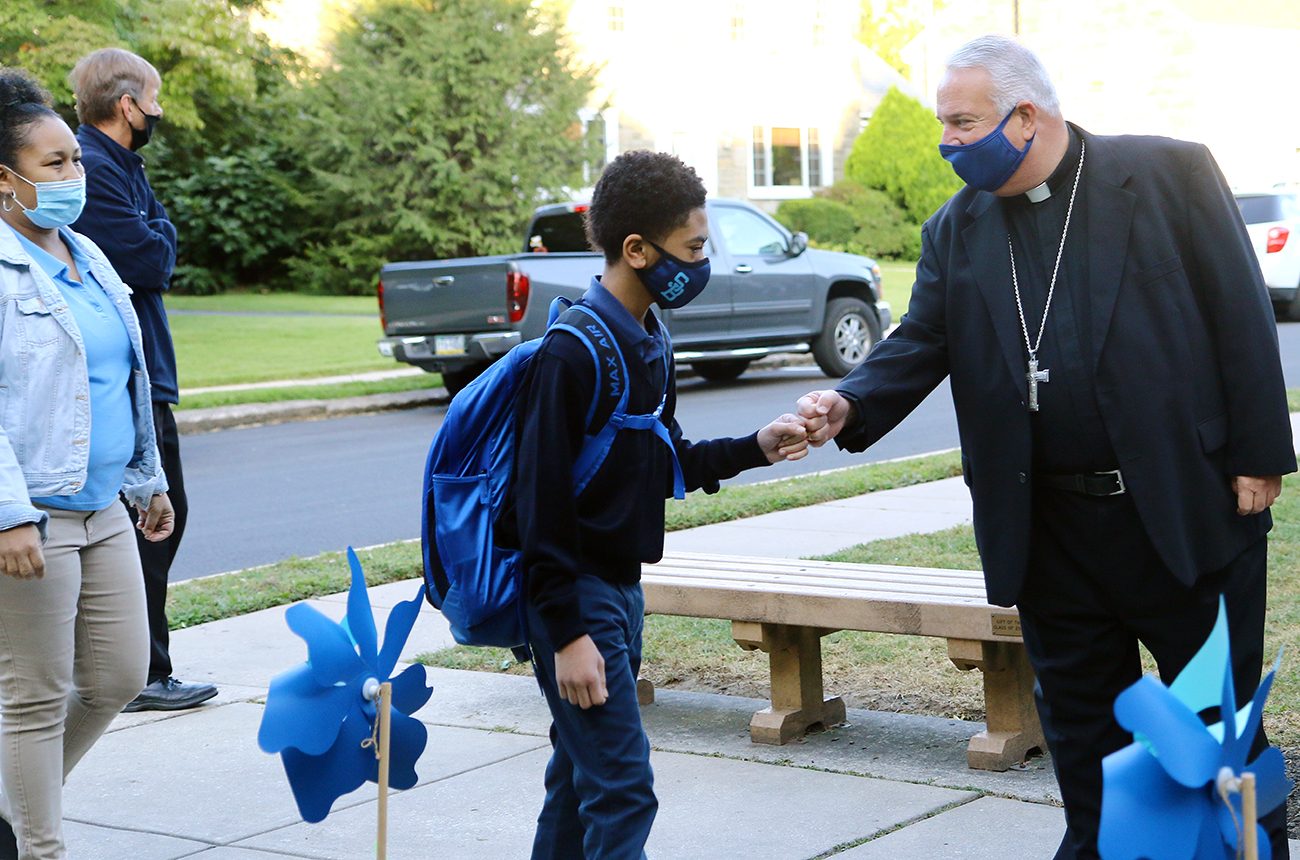 Students, faculty and staff at St. Bernadette Parish School in Drexel Hill were greeted by the archbishop as they arrived Sept. 22, exchanging fist bumps and smiling behind face masks.

“Welcome to a COVID year, and I hope it’s the last one,” joked Archbishop Pérez before blessing the school’s faculty.

Moments later, the archbishop addressed an assembly of students from grades 3, 7 and 8, who were set to “celebrate very important milestones” during the coming year, he said.

Students who had missed making their first holy Communion last spring due to COVID were now looking forward to receiving the sacrament, he said, while others were preparing for confirmation or graduation.

Adapting instructional methods throughout the pandemic had been a collaborative, dedicated effort, said the archbishop, describing archdiocesan Catholic educators as “awesome.”

“Other schools have actually been coming to (ours) … to seek direction and guidance on how to do this well,” said Archbishop Pérez.

He noted Dr. McLaughlin “had a special connection” to St. Bernadette’s, having attended the school himself.

“He was one of you just about ten years ago,” quipped Archbishop Pérez, who also thanked St. Bernadette’s pastor, Father Michael Saban, principal Joanne Montie, and faculty and staff for enabling the school to “open this year safely, and with great joy.”

The archbishop particularly thanked “Catholic families for choosing Catholic education,” and for entrusting “the care of your children to these great teachers and administrators.”

“Forming leaders for the church and our society is an incredible responsibility” that parents confer on Catholic educators, he said.

Following the assembly, Archbishop Pérez took to the school’s public address system to greet the rest of the school’s students (who remained in their classrooms to ensure adequate social distancing), praying that “the gifts of the Holy Spirit (would) keep (them) steadfast in following the Gospel with confidence.”

He personally congratulated preK teacher Kathy Pedano on celebrating her 25th year as a teacher, saying that she had touched “the lives of hundreds and hundreds of students.”

Above all, said Archbishop Pérez, the coming academic year — and life itself — should be faced with confidence in God’s “providential love and nearness.”

“This is a time that’s different and sometimes a little scary,” he admitted. “But as Christians, we are a people of hope … a gift ultimately from God … that helps us to make it through difficult times.”

PREVIOUS: Food pantry, veterans group team up to fill backpacks for those in need

NEXT: Recovery walk participants find hope in every step