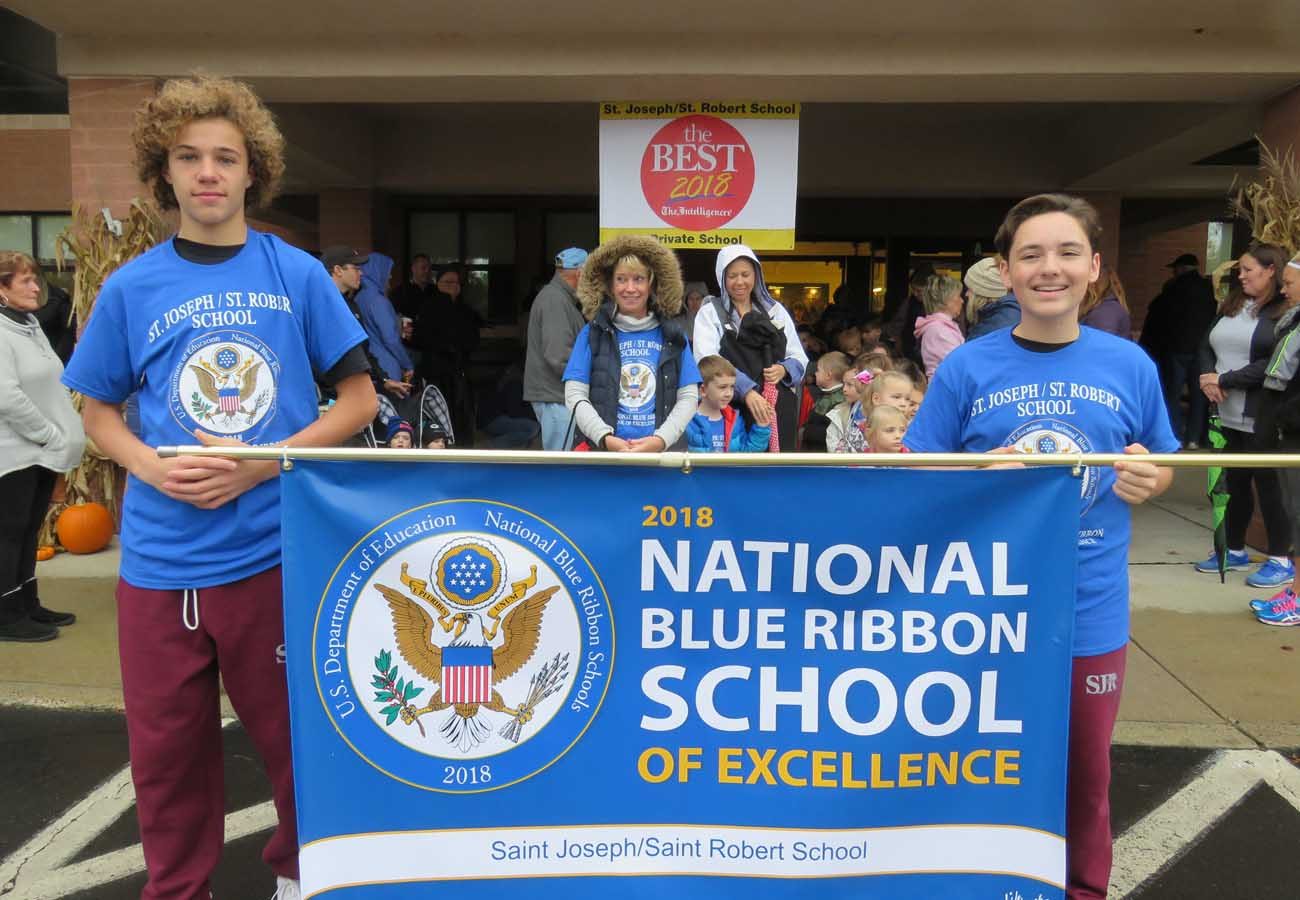 Students from St. Joseph/St. Robert School in Warrington are pictured with a banner displaying that school's 2018 National Blue Ribbon of Excellence Award. Three archdiocesan elementary schools - Mother of Providence Regional in Wallingford, St. Katherine of Siena in Wayne, and St. Patrick in Malvern - were added to the Blue Ribbon roll in a Sept. 24 announcement by U.S. Secretary of Education Betsy DeVos. (Photo by Sarah Webb)

Three archdiocesan elementary schools have been designated National Blue Ribbon Schools of Excellence, according to an announcement made today by U.S. Secretary of Education Betsy DeVos.

Mother of Providence Regional Catholic School in Wallingford, St. Katharine of Siena Parish School in Wayne and St. Patrick School in Malvern were among only 50 non-public schools of the total 367 U.S. schools selected for the 2020 Blue Ribbon cohort.

The schools were chosen based on their overall academic excellence. In particular, award officials look for student achievement in English and mathematics that ranks within the top 15% nationally. Schools are also selected when significant improvements have been made in students’ academic achievement.

St. Patrick School previously received the Blue Ribbon in 2013. With the addition of the 2020 cohort, a total of 39 different parish and regional Catholic elementary schools in the five-county archdiocesan area have been named to the Blue Ribbon roll since the program’s inception in 1982. To date, the Department of Education has conferred the award upon more than 9,000 U.S. schools.

With schools eligible for nomination once every five years, St. Genevieve Catholic School in Flourtown has been a regular recipient, having been honored in 2000, 2006 and 2016 – more times than any other archdiocesan school.

The Blue Ribbon program celebrates the “strong and successful partnership among administrators, faculty, staff and school families,” said Dr. Andrew McLaughlin, secretary for elementary education in the Archdiocese of Philadelphia.

“They work hard and make tremendous sacrifices each day because they believe in the gift of Catholic education,” said McLaughlin.

That effort has been redoubled throughout the COVID-19 pandemic, he noted.

“The fact that each of these schools has been recognized for academic excellence, during an extraordinarily challenging time in our world, speaks volumes,” McLaughlin said, highlighting the “dedication of all those working within our Catholic schools each and every day to maintain high educational standards despite societal obstacles.”

On a recent visit to an archdiocesan elementary school, Archbishop Nelson Pérez also stressed that adapting instructional methods during the pandemic had been a collaborative, dedicated effort.

Describing archdiocesan Catholic educators as “awesome,” Archbishop Pérez said that “other schools have actually been coming to (ours) … to seek direction and guidance on how to do this well.”

Due to COVID restrictions, the award ceremony for the 2020 National Blue Ribbon Schools will be held virtually, rather than in person, on Nov. 12-13. Each school will receive its plaque and commemorative flag via mail.

NEXT: Gratitude, service are marks of love in time of pandemic