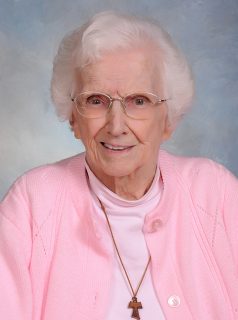 Sister Bernard Helene McGuire, O.S.F. (92), died in Assisi House, Aston on Aug. 26. She had been a professed member of the Sisters of St. Francis of Philadelphia for 72 years.

She was born Mary Helen McGuire in Baltimore, Maryland, where she was a member of St. Paul Parish and a graduate of the Catholic High School of Baltimore. She entered the congregation in 1945 and professed her first vows in 1948. She earned a B.A. in biology from Villanova University and a masters of physical science from the Catholic University of America. She ministered primarily in secondary education and parish ministry.

Sister Bernard Helene ministered in the Archdiocese of Baltimore for 47 years. She also spent a term as a member of the provincial team for the former St. Joseph Province. In her later years, she worked in the gift shop at St. Joseph Hospital in Baltimore; in parish ministry at St. Stephen Parish in Kingsville; and as a volunteer and tutor at Mother Mary Lange School in Baltimore. She also spent five years in local house ministry at St. Anthony Convent in Baltimore.

In the Archdiocese of Philadelphia, she taught at West Catholic Girls High School. In 2013, Sister Bernard Helene moved to Assisi House where she served in prayer and hospitality ministry until her death.

All services were held privately Sept. 1 in Assisi House. Burial was in Our Lady of Angels Cemetery in Aston.

Sister Bernard Helene is survived by her sister, Joan Dashiell; her brother, Francis McGuire; nieces and nephews; and by her Franciscan family.