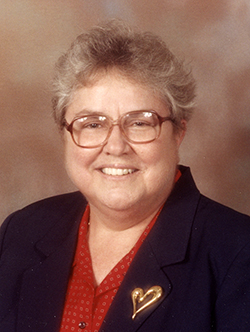 She was born Aug. 6, 1949, in Philadelphia, the daughter of the late Leo James and Claire Nichodemus Kulp. She entered the Sisters, Servants of the Immaculate Heart of Mary on Sept. 1, 1978, made her temporary profession of vows on Jan. 17, 1981, and her final profession of vows on August 4, 1984.

She also served as receptionist at the Catherine McAuley Center in Scranton from 2015 to 2019.

From 2019 until the time of her death, Sister Claire Marie served as a prayer minister at Our Lady of Peace Residence in Scranton.

Sister Claire Marie was preceded in death by a brother, Leo J. Jr. She is survived by two brothers, Stephen of Florida; and William of Levittown, Pa.; two sisters, Maryanne Greenfield of Lawton, Okla.; and Margaret Kulp of Holland, Pa.; and nieces and nephews. She is also survived by the members of the I.H.M. congregation.

A memorial Mass was celebrated Sept. 28 at Our Lady of the Eucharist Parish in Pittston, Pa. with Father Joseph Pisaneschi presiding.

Interment was at St. Catherine’s Cemetery in Moscow, Pa.