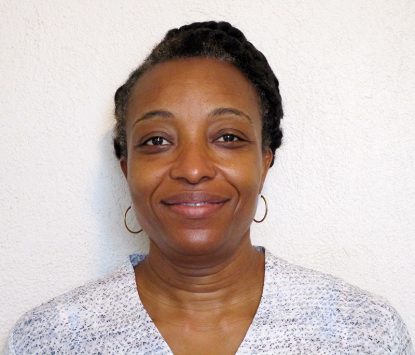 Claudia Populaire is the new director of priest retirement services and administrator of Villa St. Joseph, the retirement community for archdiocesan priests in Darby, Delaware County.

She succeeds Helen McConnell who retired after 30 years of service to the Archdiocese of Philadelphia.

Although Populaire’s contact with priests in the past has been mostly as a parishioner and volunteer, she brings to the table years of experience in various aspects of social service, from working with children and families to elder care.

“I’ve been working with an older population for 15 years, and through high school and college I worked with priests,” she said. “Coming here, they are so welcoming, and I am so happy.”

Born in Haiti, she emigrated to the United States with her family when she was 13, originally settling in New Jersey. After high school she went on to Glassboro State College (now Rowan University), and ultimately Widener University for her master’s degree.

An active Catholic, she worked for a time as volunteer youth minister especially among the immigrant Haitian community, encouraging young people to continue their education at college and helping them to prepare for the SATs and assisting them with college applications.

Part of the work was convincing worried parents who wanted to protect their children from the bad things in the world, and assuring them that leaving for college would be for the best and they would be safe.

Over time she moved from youth and family counseling into the elder care field. Coming to the Philadelphia area, she settled in Lansdowne and was active and served as a eucharistic minister at Blessed Virgin Mary Parish, Darby.

At that time the parish was led by Father (later Msgr.) Joseph Corley. “What a great guy he was,” Populaire said.

As a social worker, especially in health care when working for Delaware County, her interest gradually shifted to elder care.

Most recently she worked as an assistant administrator for Manor Care, which operates a chain of retirement facilities for the elderly nationwide.

This will be the first time Populaire has worked for the church other than as a volunteer, and in some ways it is liberating. In most of the work world it is difficult to discuss religion with one’s coworkers. Now she can talk about matters of faith openly.

Coming to  Villa St. Joseph is a joy for her. “There is a serenity here, and when I’m here there is a sense like being whole,” she said.

Working with elderly priests is just a different role, she said. “Age is just a state of mind.”

PREVIOUS: Woman with disabilities takes her place at the boardroom table