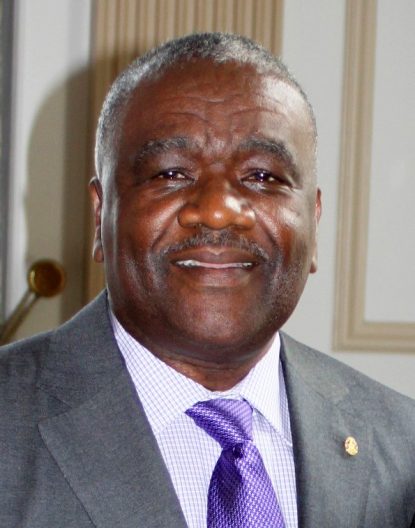 James Andrews, director of the archdiocesan Office for Black Catholics.

Slowly, Catholics are returning to church, at least those who are able. Even as restrictions from the COVID-19 coronavirus lift, there remain the essentials of inviting people to return to the Mass and sacraments, and James Andrews has good ideas for how to do just that – for the benefit of Black Catholics and everyone in the Archdiocese of Philadelphia.

Andrews is the new director of the archdiocesan Office for Black Catholics. For the past five years he held the same position in the Diocese of Camden, where he resides. But he also travels across the bridge to Philadelphia on Sunday mornings for Mass at St. Martin de Porres Parish, where is a faithful parishioner.

The church at 24th and Lehigh avenues in North Philadelphia is home not only to Black Catholics but to Latino and some White people, too, he noted. The parish during this post-lockdown COVID era has seen a small but steady increase in attendance each week since churches began welcoming worshipers again for Sunday Mass June 7.

Andrews points to advantages for word of mouth getting out in the community, including good preaching by the pastor, Father Stephen Thorne, parochial vicar, Father Addisalem Mekonnen and Deacon Melvin Burton. “They hear that the music is lively, and from an Afro-centric spirituality, people enjoy that,” Andrews said.

High quality and high energy sacred music has always been a hallmark of liturgies in predominantly Black Catholic parishes. It’s an important character of the Mass but it can lengthen its duration, and that takes some getting used to if one is unaccustomed to a liturgy lasting 90 minutes to two hours.

“I’m OK with that, I’ve grown used to that,” Andrews said. “I have friends who are Baptist. Everybody’s trying to evangelize and ask you to come to their church. The way I get them to come to my church, I’ve got to go to their church. In the past I would find it difficult to be in a religious service for a couple of hours but now I’m conditioned. It’s not a problem at all.”

In addition to music, Andrews points to a strong commitment to welcoming newcomers as a way to attract people to the Mass, in any parish.

“Everybody is part of the welcoming committee” at a parish, Andrews said. “When you go to a new church – people recognize when there’s a new person – when (parishioners) stop to welcome you, say hello, they smile at you — that’s critical.

“Secondly, some people have their designated seats (in a church). But it doesn’t matter. It’s not your seat, it’s everyone’s seat,” he said.

The welcoming attitude by all should be, “come sit anywhere you want, be happy, be comfortable. It’s all part of people being welcoming and friendly,” Andrews said.

Through his travels during his career, Andrews has seen the Catholic Church in the United States through many local lenses, be it Chicago, Miami, Washington and many other places.

Relying on his Catholic roots, the native of Roxborough and product of a North Philadelphia Catholic grade school and the former Bishop John Neumann High School in South Philadelphia, Andrews went on to Cheyney University before working for more than 36 years in the U.S. Department of Labor.

During that time he also pursued graduate studies at Penn State University and recently earned a graduate theology degree at Georgian Court University in New Jersey.

Along the way Andrews and his wife of 25 years, Dolores, built their family with love and hard work. They’re proud of their two grown sons, and especially their 6-year-old grandson, who keeps his Pop Pop more than busy from rising to bedtime whenever they’re together.

He has also become known as a leader in the church, named for a term as president of National Association of Black Catholic Administrators, and for teaching homiletics to candidates in the permanent diaconate program in the Camden Diocese.

Chiefly Andrews’ work at the Labor Department was to train federal employees and labor union members on federal policies and handle disputes, and later lead a staff in that work.

His management role utilized his skills in dealing effectively with people and in group dynamics. They are traits that he believes will serve him well as he prepares to visit the Philadelphia-area parishes and some 22,000 Black Catholics in the archdiocese.

“I’m going to go to church anyway, so I can go to these different churches and meet a number of the people,” Andrews said. “And hopefully when COVID is behind us, (we can) start having some events to bring people back and feel more of a community.”

As he settles into his new role, he has high hopes for building community among Black Catholics and all people in the archdiocese.

“In addition to proclaiming the Gospel and evangelizing and increasing our numbers,” he plans also to have “a lot more activities that will bring people together. So they’re not just coming to Mass on Sunday and that’s it, but also other activities such as cultural events where we share with other cultures,” he said.

In the Camden Diocese he started a diversity committee representing various ethnic segments in the church to share their experiences and cultures, and he’d like to do something similar in the Philadelphia Archdiocese.

He knows that “whenever you bring people together there’s two things you’ve got to have: food and music,” Andrews said. “That would be an opportunity for people to understand each other because many of us don’t understand anybody outside of our own culture.

“When people take the time to talk to you, you find out that you have a lot of similarities. We have more things in common than not. I think that’s a good starting point.”

NEXT: Math teacher’s award adds up to lesson plan for real success