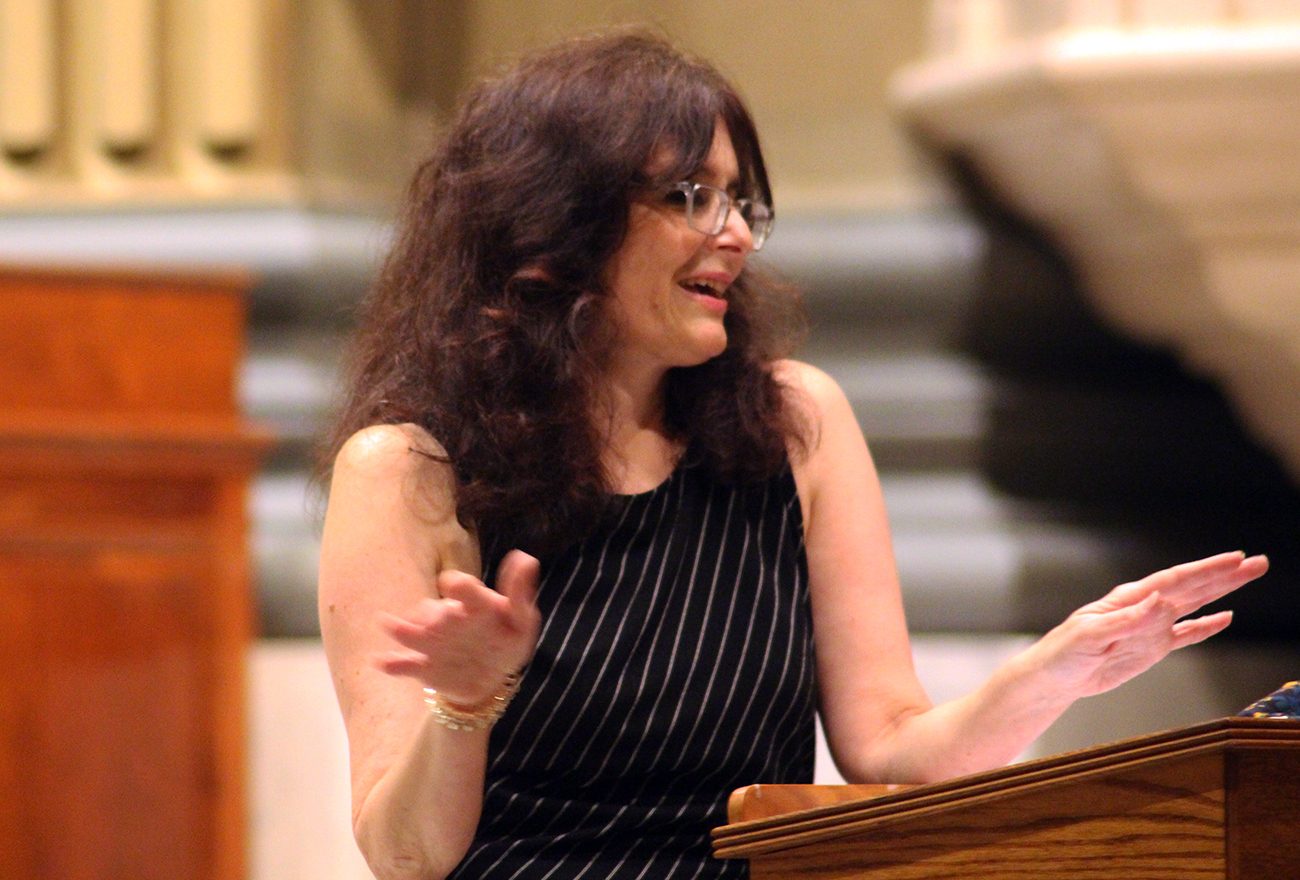 Attorney and columnist Christine Flowers speaks at an Oct. 22 lecture on faith in public life hosted by the Cathedral Basilica of SS. Peter and Paul and the archdiocesan Office for the New Evangelization. (Gina Christian)

As Election Day approaches in a deeply divided U.S., Catholics are being challenged as never before to examine the relationship between their religious beliefs and their citizenship.

That’s according to immigration attorney and columnist Christine Flowers, who reflected on faith in public life at an Oct. 21 lecture at the Cathedral Basilica of SS. Peter and Paul.

Sponsored by the Cathedral Parish and the archdiocesan Office for the New Evangelization, the hour-long presentation, entitled “Built Upon Rock: Finding Your Footing in a Period of Great Turmoil,” highlighted the 25th anniversary of Pope St. John Paul II’s encyclical Evangelium Vitae (“The Gospel of Life”).

The encyclical’s message — which stressed the value and inviolability of human life — is more urgent than ever, said Flowers, as she surveyed her efforts to navigate often turbulent waters as a devout Catholic, a professional and a public figure.

Speaking “as a layperson who embraces her faith, who loves her church and who functions in the secular world,” Flowers admitted that she “does a tight-wire tap dance sometimes in trying to exercise (her) faith” through her life and work in the secular world.

Her representation of asylum and refugee seekers, including a Malian woman who had been subjected to female genital mutilation (FGM), has led her to “have a problem with this (presidential) administration … and its policies on immigration,” said Flowers.

“Please believe me when I say there are compelling injustices in this country and in this world,” she said. 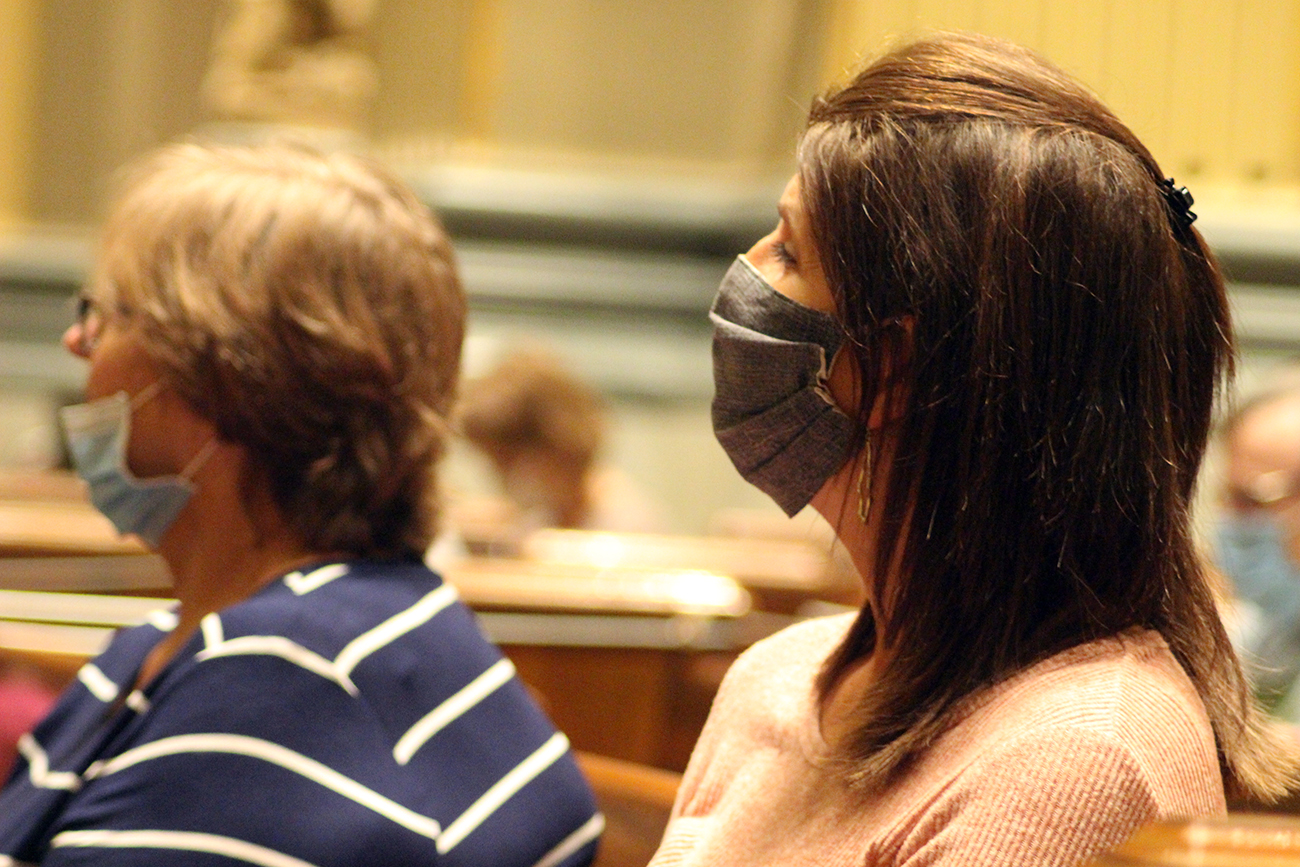 Attendees listen as attorney and columnist Christine Flowers speaks about faith in public life during an Oct. 22 hosted by the Cathedral Basilica of SS. Peter and Paul and co-sponsored by the archdiocesan Office for the New Evangelization. (Gina Christian)

She acknowledged that Catholic voters have found themselves struggling to weigh the merits of candidates whose positions on key issues are at various points in conflict with Gospel values.

“It’s very, very difficult to look at the choices in this election and say, ‘Oh, yeah, that’s my guy,’” she said.

At the same time, Flowers said, the “objective, fixed, overarching evil” of abortion compels her to side with the U.S. bishops on what is arguably the most polarizing issue in modern politics.

In an updated teaching document, the bishops have stressed that “the threat of abortion remains our preeminent priority because it directly attacks life itself, because it takes place within the sanctuary of the family, and because of the number of lives destroyed.”

“I am pro-life,” said Flowers, adding she recently had difficulty in writing an article on the subject for CNN, with one editor at that outlet repeatedly replacing the term “pro-life” with “anti-abortion.”

She also cited retired Philadelphia Archbishop Charles Chaput as a profound influence on her thought, and during her talk quoted several passages from his 2008 book “Render Unto Caesar: Serving the Nation by Living Our Catholic Beliefs in Political Life.”

Citing Archbishop Chaput, Flowers said “this idea of a wall between church and state is magical thinking.”

Rather, “there is a coexistence between church and state … they are intertwined.”

She critiqued the approach of Catholic politicians who advocate a privatized view of their faith that enables them to support legislative policies in conflict with Catholic teaching.

“These days, it seems as if that principle is pumped up on steroids,” she said, pointing out that Catholics are often quick to “mute” themselves in public discussions of volatile topics.

“I long ago learned that you cannot be Catholic and at the same time silent against injustice,” she said.

Flowers’ talk, which was followed by a question-and-answer session, was well-received by attendees.

Frank and Julie Kurdzeil of St. William Parish in Philadelphia agreed with Flowers that the right to life was a foundational issue in the election.

“We can talk about other issues, those on the left like social justice, and others on the right, but we can’t debate the right to life,” said Julie Kurdzeil.

Frank Kurdzeil drew a parallel with architectural engineering, saying that without “a solid foundation, a tall building will go down. So if you take away that basic foundation of the right to life, all that other stuff doesn’t matter, because it’s basically standing on sand.”

Addressing Flowers, one attendee shared how “politics…the issue of the right to life” and her Catholic faith have deeply divided her family.

Flowers expressed compassion for the woman’s plight, noting that she had “seen that in many families.”

“It is such a great burden to lose … the comfort of people so close to you,” she said, assuring the woman of her prayers and adding, “Politics should not, should not separate us.”