Hope rises from ashes at Our Lady of Angels 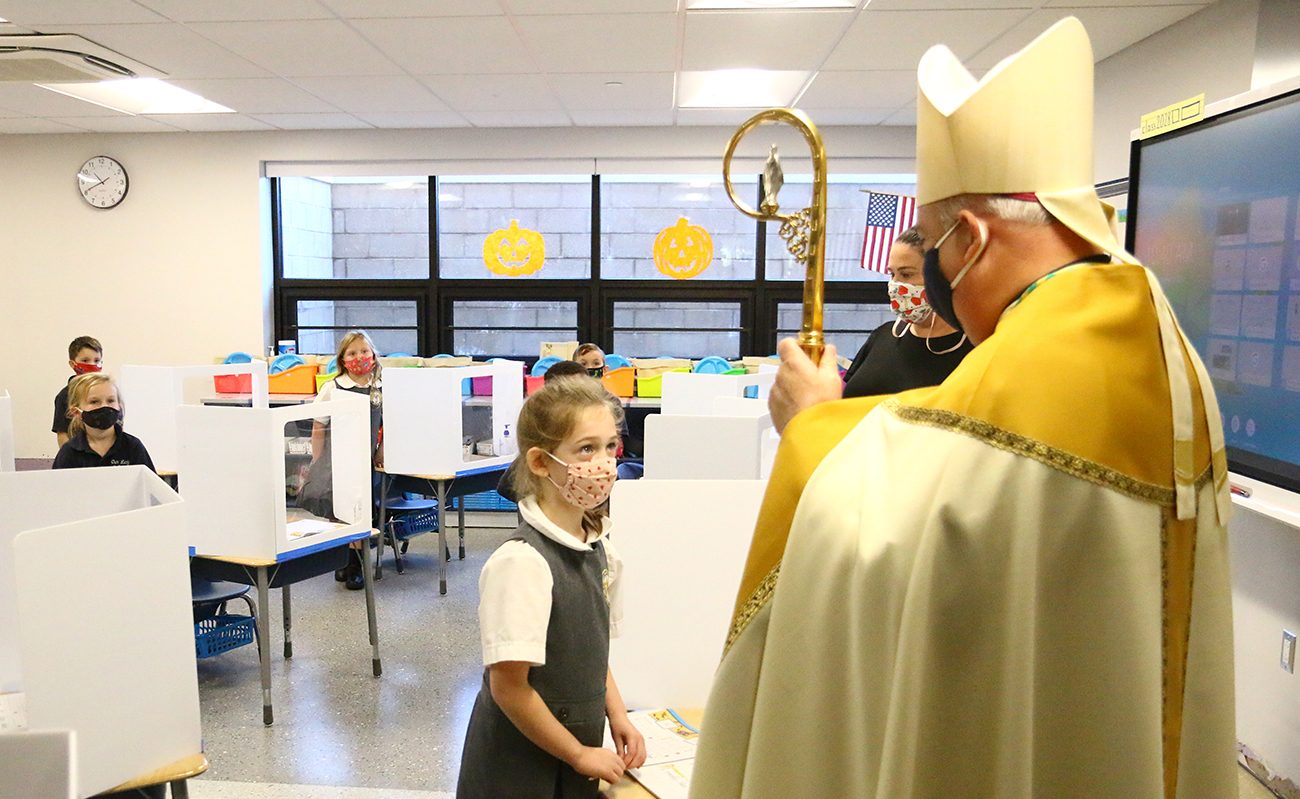 Archbishop Nelson Pérez greets a student during an Oct. 7 visit to the newly rebuilt Our Lady of Angels Regional School in Morton, which had been devastated in a July 2018 fire. (Photo by Sarah Webb)

A Catholic school in Delaware County, destroyed by fire in 2018, has now become an example of “what hope looks like,” said Archbishop Nelson Pérez.

At an Oct. 7 prayer service, the archbishop blessed the rebuilt Our Lady of Angels Regional School (OLA) in Morton, describing the new, state-of-the-art structure as “just amazing.”

(See scenes from his visit in our photo gallery here.)

The gathering, held on the feast of Our Lady of the Rosary, was attended by members of OLA’s student council executive board, as well as Father James Goerner, pastor of Our Lady of Perpetual Help Parish (OLPH) in Morton; OLPH parochial vicar Father Quan Tran; Father Roland Slobogin, pastor of Our Lady of Fatima Parish in Secane; Bill Haburcak, chair of OLA’s board of limited jurisdiction; OLA principal Susan Lowe; and Bernadette Dougherty, assistant superintendent of elementary education for the Archdiocese of Philadelphia.

Formed in 2012, the OLA school serves students from both OLPH, where it is located, and Our Lady of Fatima. Just six years after its creation, however, a devastating blaze broke out in July 2018. The older section of the school was essentially gutted; the newer section, although protected by a firewall, suffered heavy smoke and water damage.

Msgr. John Savinski, then pastor of OLPH, had just finished praying his rosary during a rare vacation day when he received word of the fire.

“I came right back immediately and saw all the fire trucks and what happened, and it was like walking into another world,” said Msgr. Savinski, who after his July 2020 retirement now serves as Archbishop Pérez’s master of ceremonies.

Investigators concluded that the fire had been sparked by an electrical problem in the school’s attic, he said. The heat from the blaze “leveled every ceiling” and “even melted some of the bricks,” he added, noting that more than 20 area fire companies had responded to the emergency.

“Talk about a moment that appears hopeless,” Archbishop Pérez said in his remarks at the Oct. 7 prayer service.

Fortunately, the building was unoccupied and no one was injured, although the faculty and Lowe, who had just assumed her position as principal, lost all of their office and educational equipment, said Msgr. Savinski.

The school’s insurance policy covered most of the rebuilding expenses, with donations offsetting the cost of smaller items. During the two-year reconstruction phase, students were relocated to an unused wing of Cardinal O’Hara High School in Springfield, four miles away.

Yet even amid the flames were signs of hope: a statue of the Blessed Mother, along with a portrait of Our Lady of Perpetual Help, remained unscathed.

An exterior statue of the Blessed Mother, also untouched by the blaze, “seemed to glow as all this was going on,” said Msgr. Savinski. “I really felt our Blessed Mother has kept us so well under her protection.”

He noted that the school community “had stuck together during the last two years,” despite moments when “there were quite a few pushbacks,” said eighth grader Jackson Holton, vice president of the OLA student council.

The school community’s dramatic experience of loss and restoration is a teaching moment, said Archbishop Pérez, urging student to “carry this lesson forward” through the coming decades.

“In the end, our Christian life revolves around hope,” he said. “Even when things do appear to have burned to the ground – in this case, literally – our Christian faith comes in and says, ‘The story is not done.’”

Reflecting after the service, while the archbishop visited the school’s classrooms, Father Goerner agreed.

“This is a wonderful opportunity for all of us to realize that there things that happen in our lives we don’t expect – the burning down of the school, COVID, a death in the family,” he said. “We can either be angry or fearful about it, or we can say, ‘All right, this is what has happened. Now how do we go forward?’”

NEXT: Phila. priest removed from ministry on sex abuse claim