Loved ones lost during COVID surge remembered at special Mass 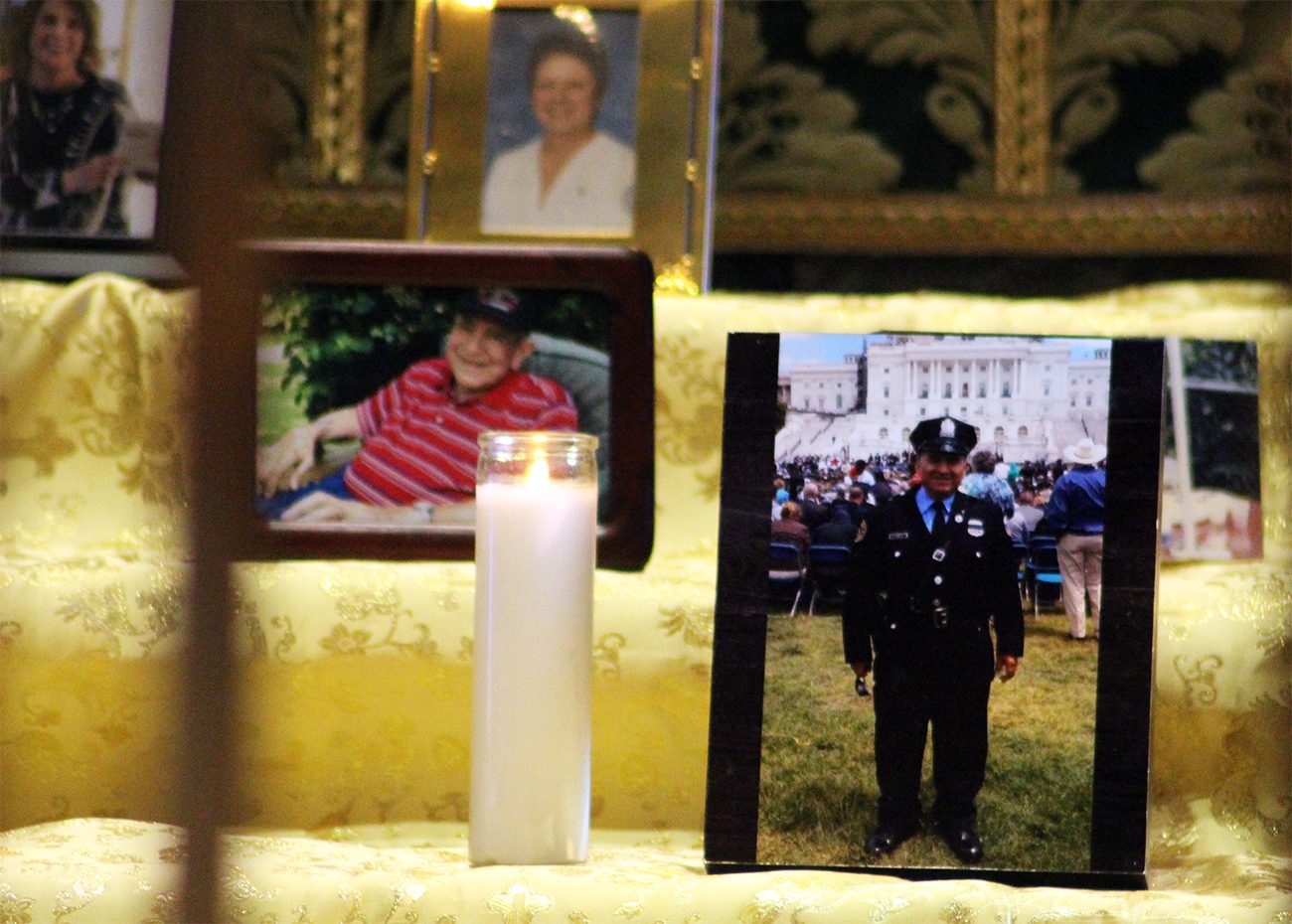 Pictures of loved ones lost to various illnesses during the first wave of COVID-19 stand before the altar at Resurrection of Our Lord Parish in Northeast Philadelphia, which celebrated an Oct. 18 Mass of remembrance. The liturgy was for many families the only chance to publicly mourn after months of restrictions on gathering sizes. (Gina Christian)

Dozens came together in Northeast Philadelphia last Sunday for a Mass honoring loved ones lost to various illnesses during the initial surge of COVID-19, which has now infected at least 41 million and killed more than one million worldwide.

Some 80 participants attended the Oct. 20 liturgy at Resurrection of Our Lord Parish, placing photographs and ashes of the deceased before the altar prior to the start of Mass.

The images and remains were blessed by Resurrection’s pastor Father James DeGrassa, who was the principal celebrant.

Although the parish annually offers a Mass of remembrance in November, Father DeGrassa said that the unique circumstances caused by the pandemic warranted a separate liturgy, especially since funeral services were severely reduced during the initial stages of the state’s public health lockdown.

With the earlier phases of COVID restrictions drastically limiting the size of gatherings, he added, family and friends “didn’t get to have that moment to honor that person’s life.”

At one point, funeral Masses and services were limited to “10 people at a time in the building,” forcing families to exclude members from attending, said Father DeGrassa. 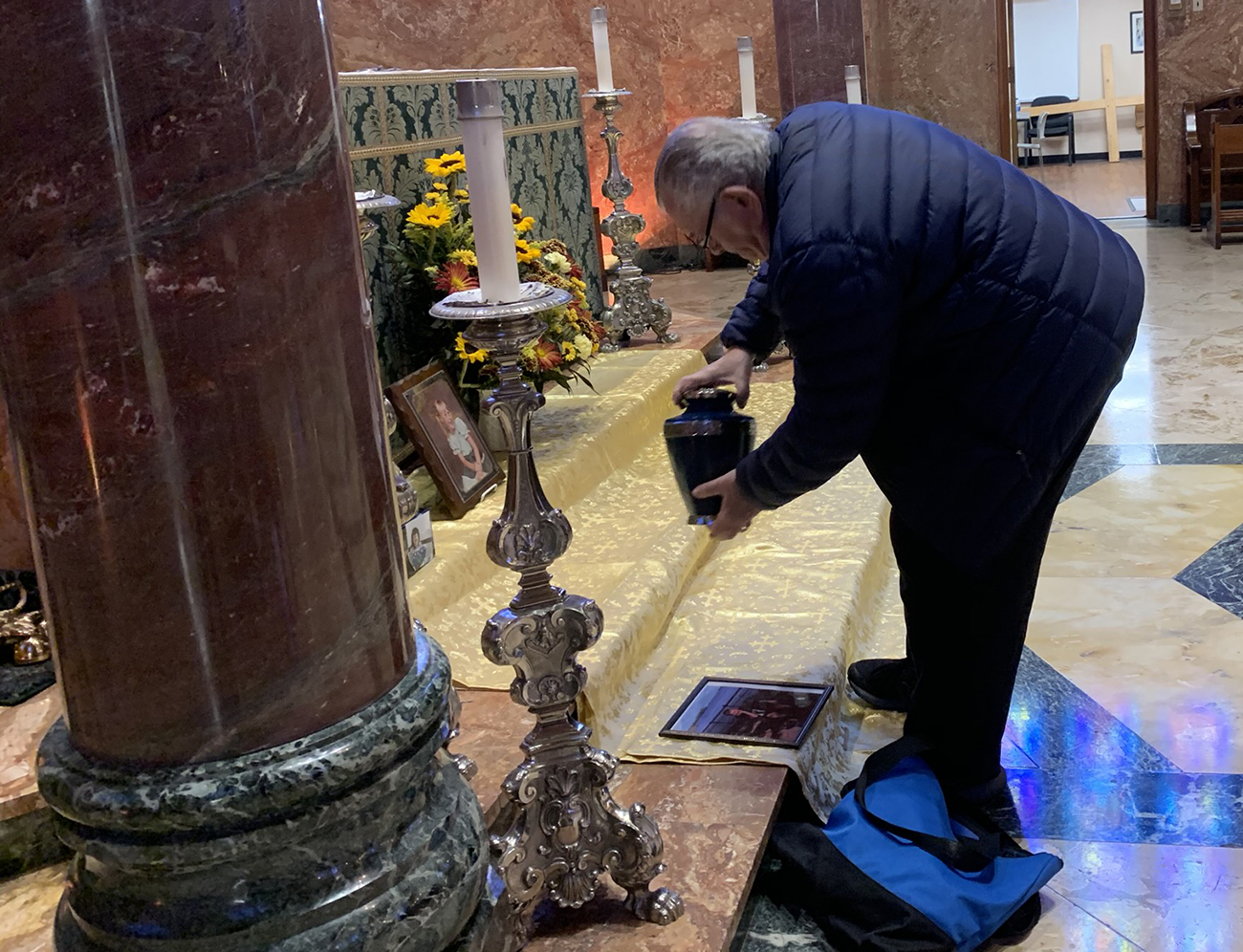 A parishioner places the ashes of a loved one before the altar at Resurrection of Our Lord Parish in Philadelphia, where an Oct. 18 Mass honored those lost due various illnesses, including the virus, during the pandemic’s initial phase when public health restrictions severely limited funeral observances. (Gina Christian)

Others found themselves having to delay final arrangements altogether.

After her mother died in April from the virus, parishioner Christine Earley said her family “couldn’t have a funeral.”

“She was in a nursing home and we couldn’t say goodbye,” said Earley. “We got her ashes; that was it.”

With her mother’s interment at last scheduled for this week, Early said she was grateful for the Oct. 18 Mass and Father DeGrassa’s blessing.

“I haven’t been able to part with her,” she admitted.

The liturgy also welcomed participants from other faith communities, including Natalia Kaczor, a member of Calvary Chapel in the city’s Philmont section.

Kaczor lost both an adult son and a sister to the virus.

“My son had multiple disabilities, and he went six months without seeing one doctor,” she said, noting that after an emergency caregiver had unwittingly infected him, he battled the illness for five weeks before finally succumbing.

“I said to him, ‘You can go with God; it’s OK,’” Kaczor said, adding that her son’s death also disconnected her from a “family” of support professionals.

“I didn’t only lose Mark; I lost the people that had worked with him for 11 years,” she said.

Kaczor’s sister, a frontline worker, contracted COVID while on the job at a nursing home in Massachusetts.

“She was worried about all the things they were hiding,” said Kaczor, referencing the high rates of coronavirus infection and substandard precautions at many congregate care facilities worldwide. “She was a hero and my son was a trooper.”

In his homily, Father DeGrassa consoled participants – many of whom wept openly – with the hope embodied in Christ’s death and resurrection.

“We have to trust in God and in his promise of eternal life,” he said. “God made each and every one of us … to have and to hold for eternity.”

During the Mass, he said, “Jesus whispers to each of us in our hearts” on “how to live, and why we live.”

Just as Christ selflessly offered his body and blood for our redemption, said Father DeGrassa, “we need to be reminded … that our life is not about us, but is supposed to be lived out as a gift every day … a gift to the world.”

Catholics believe that “the Mass is the greatest prayer we have,” he said. “Inside the Mass, heaven and earth meet, and through the Mass, we’re most connected to heaven.”

Despite the profound reality of grief, he said, “the promise of every single Mass (is) that we’re made for more than this world. We’re made for eternal life.”

Kaczor said her Christian faith enabled her to look through and beyond her tears.