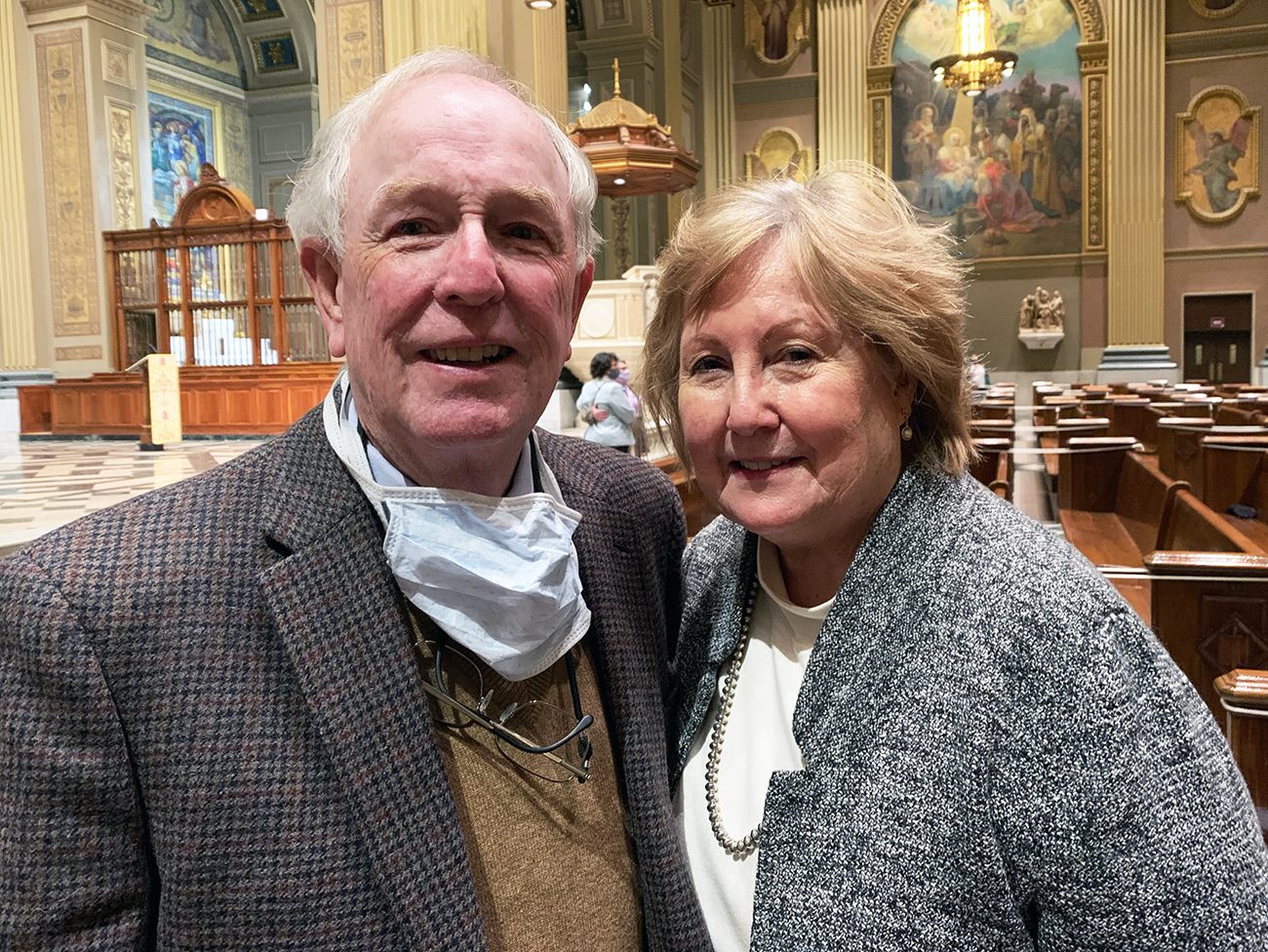 John and Regina Devine of St. Agnes Parish in West Chester were among some 110 couples who celebrated their wedding anniversaries during an Oct. 17 Mass at the Cathedral Basilica of SS. Peter and Paul. (Gina Christian)

Several couples marked their wedding anniversaries this past weekend at a liturgy honoring marriage as a sign of divine love amid a troubled world.

The annual gathering has been a tradition for well over a decade, said Steven Bozza, director of the archdiocesan Office for Life and Family, which coordinated the observance.

The sacrament of marriage reflects the Trinity itself, said Bozza.

“In the Holy Trinity, you have a community of Persons: the Father and the Son, and the Holy Spirit proceeds from that interchange of love,” he said. “In marriage, you have the same dynamic going on.”

Prior to the Mass, Cathedral rector Father Dennis Gill explained the more than 110 couples present would effectively reaffirm their vows through the reception of the Eucharist.

“The actual renewal of your marriage happens … when you eat and drink of the mystery of our Lord’s death and resurrection,” he said. “You are a sign to the church of this mystery.”

In his homily, Bishop McIntyre drew parallels between marriage and the day’s Gospel, in which Jesus rebuffed the Pharisees’ attempt to entrap him over the legality of paying taxes to Caesar (Mt 22:15-21).

By calling the religious leaders’ “malice and hypocrisy into the light,” Jesus refused to “allow things to fester in the dark,” said Bishop McIntyre.

He cited as a modern example of courageous honesty the beatified German Cardinal Clemens August von Galen, whose outspoken criticism of the Nazi regime during the Second World War earned him the nickname the “Lion of Munster.” 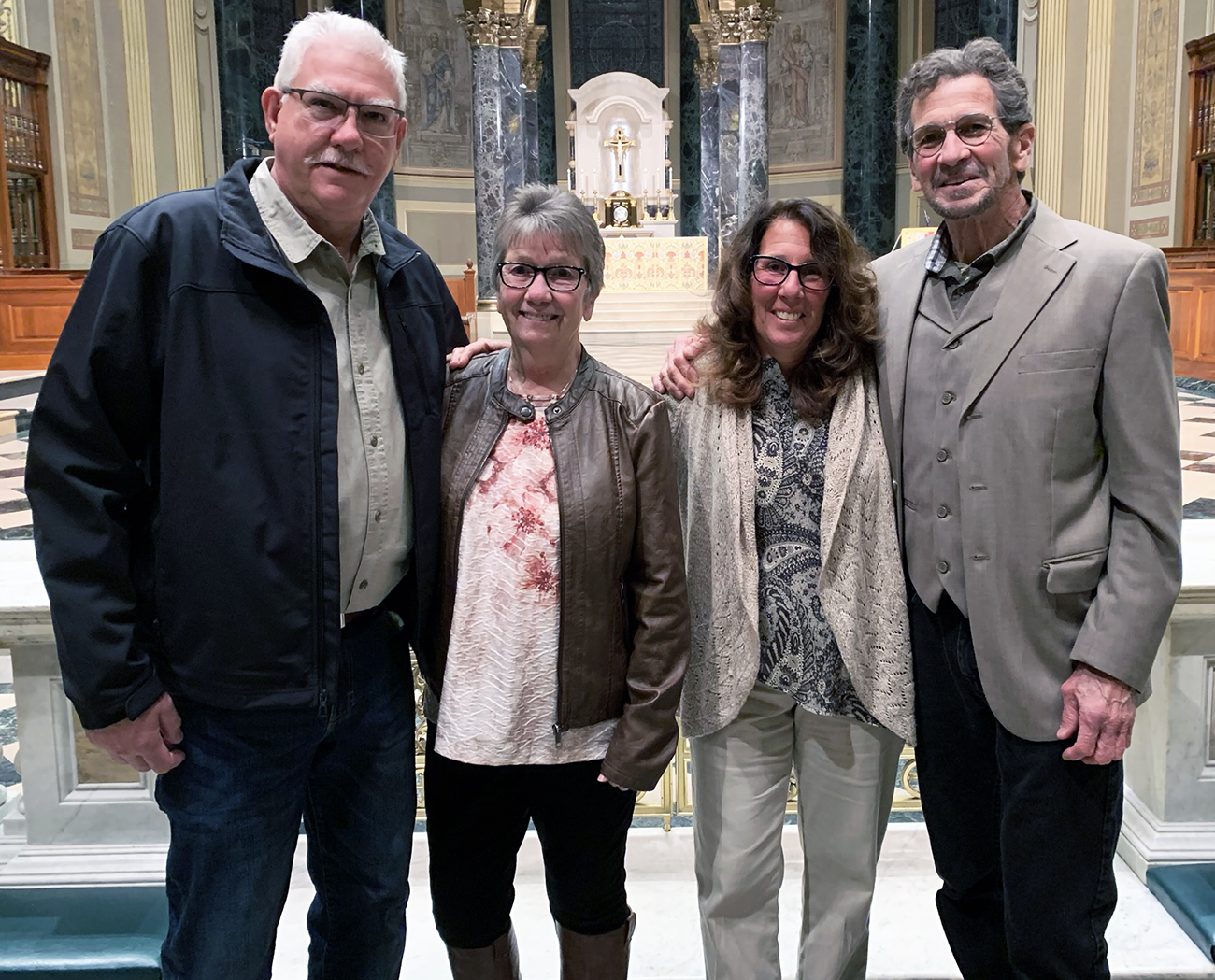 Whether in society or in family life, masking sinfulness can ultimately “shape how we relate to each other and how we love each other, or how we don’t love each other,” said Bishop McIntyre.

Rather than holding onto anger and unforgiveness, he said, “bring them into the light of the grace you were given on the day you celebrated the sacrament of marriage, and the grace you’re given each and every day as you live it out.”

He added that Jesus’ response to the leaders – directing them to “repay to Caesar what belongs to Caesar and to God what belongs to God” (Mt 22:21) – shows God has a plan for society and for “each and every one of us.”

“The Lord placed someone else in your path, and you fell in love with that person (and) went … to the altar,” said Bishop McIntyre.

Despite the challenges of marriage and family life, he said, “through it all, I’m sure you could see the hand of God at work.”

Kurt Kugler, a parishioner at Our Lady of Grace Parish in Penndel, agreed.

“I think life together with a partner is a journey, and sometimes the journeys take wild and different turns … that are all a part of it,” said Kugler, married 40 years to his wife Dee. “It just makes you stronger as a Christian person.

Dee Kugler said that couples “need to start their marriage with a Catholic Mass,” which provides a “foundation” for a solid union.

Her brother Bernie LaFleur, celebrating four decades of marriage to wife Janice, said that the sacrament of matrimony ensured a deeper level of commitment.

“When your vows were made before the Lord, it’s a little bit harder to renege on that contract than on a governmental one,” said LaFleur, a parishioner of St. Michael the Archangel in Levittown.

Lasting, holy marriages are essential for society, said John and Regina Devine of St. Agnes Parish in West Chester, now in their 49th year as husband and wife.

“Marriage is the foundation of a family and of a nation,” said Regina Devine. “When a family is strong, a nation is strong.”

Although younger generations are shying away from the altar (just 44% of Millennials were married in 2019), matrimony is an attainable goal, said John Devine.

“Marriage is a team sport, and it’s bigger than any one individual,” he said. “Sometimes teams don’t always play well together, but you have to work at it and practice.”

NEXT: Loved ones lost during COVID surge remembered at special Mass