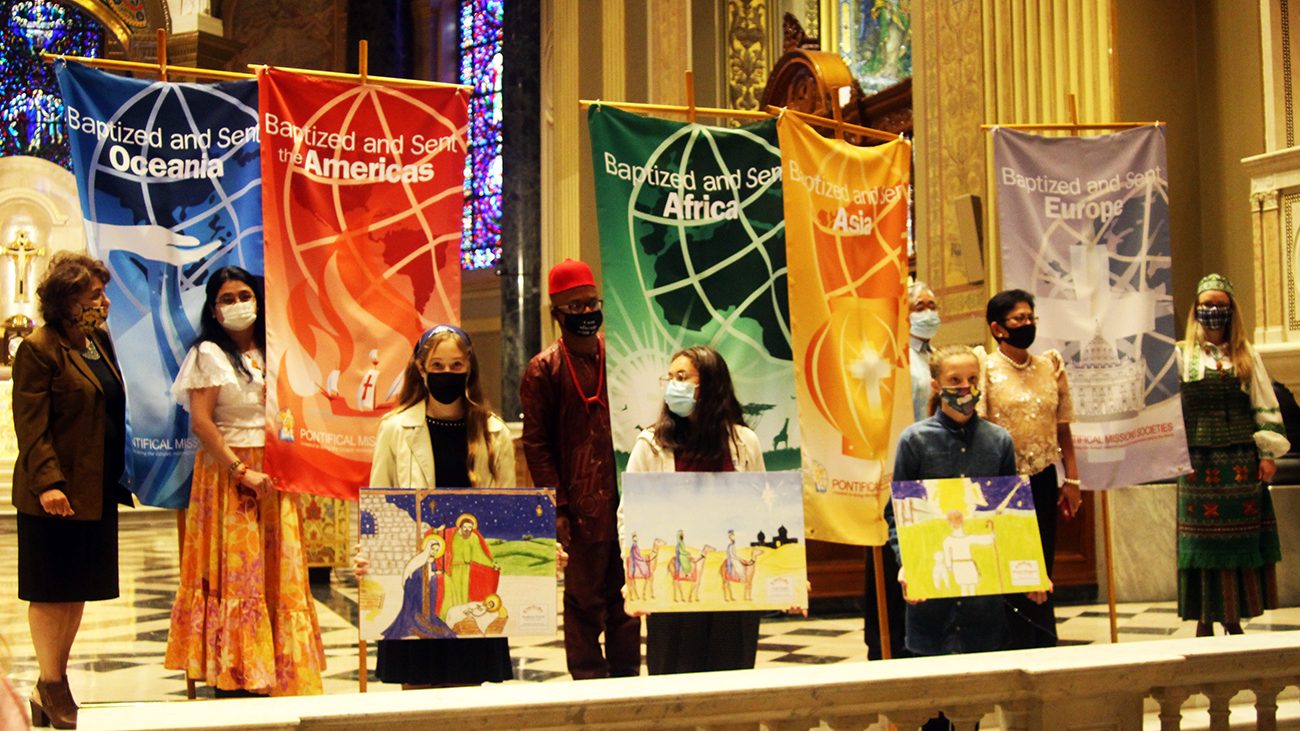 Participants at the Oct. 18 Mass for World Mission Sunday celebrated at the Cathedral Basilica of SS. Peter and Paul display banners and art work celebrating the role of the missions in the church. (Gina Christian)

An Oct. 18 Mass marked World Mission Sunday while kicking off a year-long celebration of the Philadelphia Archdiocese’s 110-year commitment to spreading the Gospel worldwide.

Some 150 area faithful gathered at the Cathedral Basilica of SS. Peter and Paul for the liturgy, at which Cathedral rector Father Dennis Gill was the principal celebrant. Concelebrants included Father Rene Againglo, representing the Archdiocese of Cotonou in the West African nation of Benin, and Msgr. Arthur Rodgers, the director of Philadelphia’s archdiocesan Pontifical Mission Societies, who also served as homilist.

Members of various cultural communities, dressed in ethnic attire, carried banners for mission areas such as Africa, the Americas, Europe and Asia.

Winners of the Missionary Childhood Association’s annual Christmas artwork contest were also honored, with their submissions displayed to one side of the sanctuary. Toni Frank of St. James Regional School in Ridley Park and Andrea Verch of the Academy of Notre Dame de Namur in Villanova received national-level recognition, while archdiocesan awards went to Hannah Pozz of St. Peter the Apostle School in Philadelphia, Pari Amin of Maternity B.V.M. School in Philadelphia, Rachel Weigand of Notre Dame De Lourdes in Swarthmore, and Nathan Gotto of St. Francis of Assisi in Springfield.

“Each and every one of us is a missionary,” said Msgr. Rodgers, reflecting on this year’s theme for World Mission Sunday, “Here I am, send me,” the words spoken by the prophet Isaiah in response to God’s call (Is 6:8).

Instituted as “Mission Sunday” in 1926 by Pope Pius XI, the annual observance, which takes place on the next to last Sunday of October, calls on Catholics to prayerfully and financially support global evangelization efforts.

A few years prior to the inaugural celebration, Pope Pius XI had named four existing organizations as the Pontifical Mission Societies, which in total now aid some 1,110 mission dioceses throughout the world. The Society for the Propagation of the Faith supports the evangelization efforts of the local church, the Missionary Childhood Association educates children about their part in the church’s missionary outreach, the Society of St. Peter the Apostle trains the next generation of missionary clergy and consecrated religious, and the Pontifical Missionary Union focuses on forming clergy, religious and pastoral leaders more deeply in their role as evangelizers. 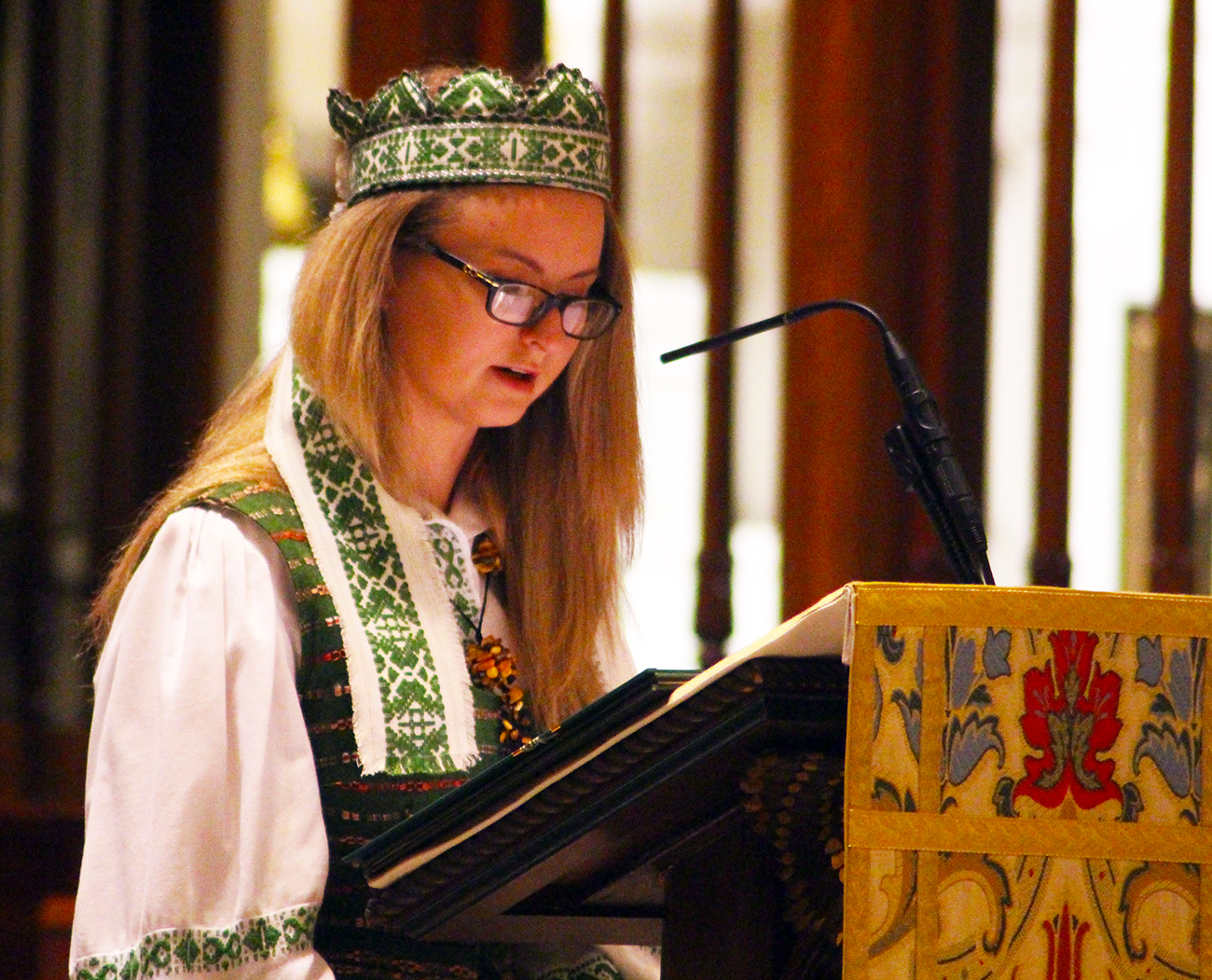 Erika Gedvilaite, dressed in her native Lithuanian costume, reads prayers of the faithful during at Oct. 18 Mass at the Cathedral Basilica of SS. Peter and Paul celebrating World Mission Sunday. (Gina Christian)

Philadelphia has a long history with the missions, said Michele Meiers, assistant director of the archdiocesan Pontifical Mission Society office.

The Society for the Propagation of the Faith, founded in 1822, “supported the vast diocese Louisiana, which Philadelphia was a part of” at that time, she said.

Throughout the coming year, Meier’s office will highlight various milestones in the archdiocese’s mission activity. But in the immediate, the COVID-19 pandemic has intensified the need to support missions, said Msgr. Rodgers, since developing nations, and those working to evangelize them, have been left particularly vulnerable by the virus.

Despite widespread “pain and suffering” in the U.S., he said, “we have been blessed” with far more robust medical resources than those found in impoverished countries.

“We are able to put on our masks,” said Msgr. Rodgers. “But there are so many people that are unable to wash their hands because they have no running water.”

Area faithful have shown a remarkable — and sacrificial — dedication to those working in the mission field, said Meiers. 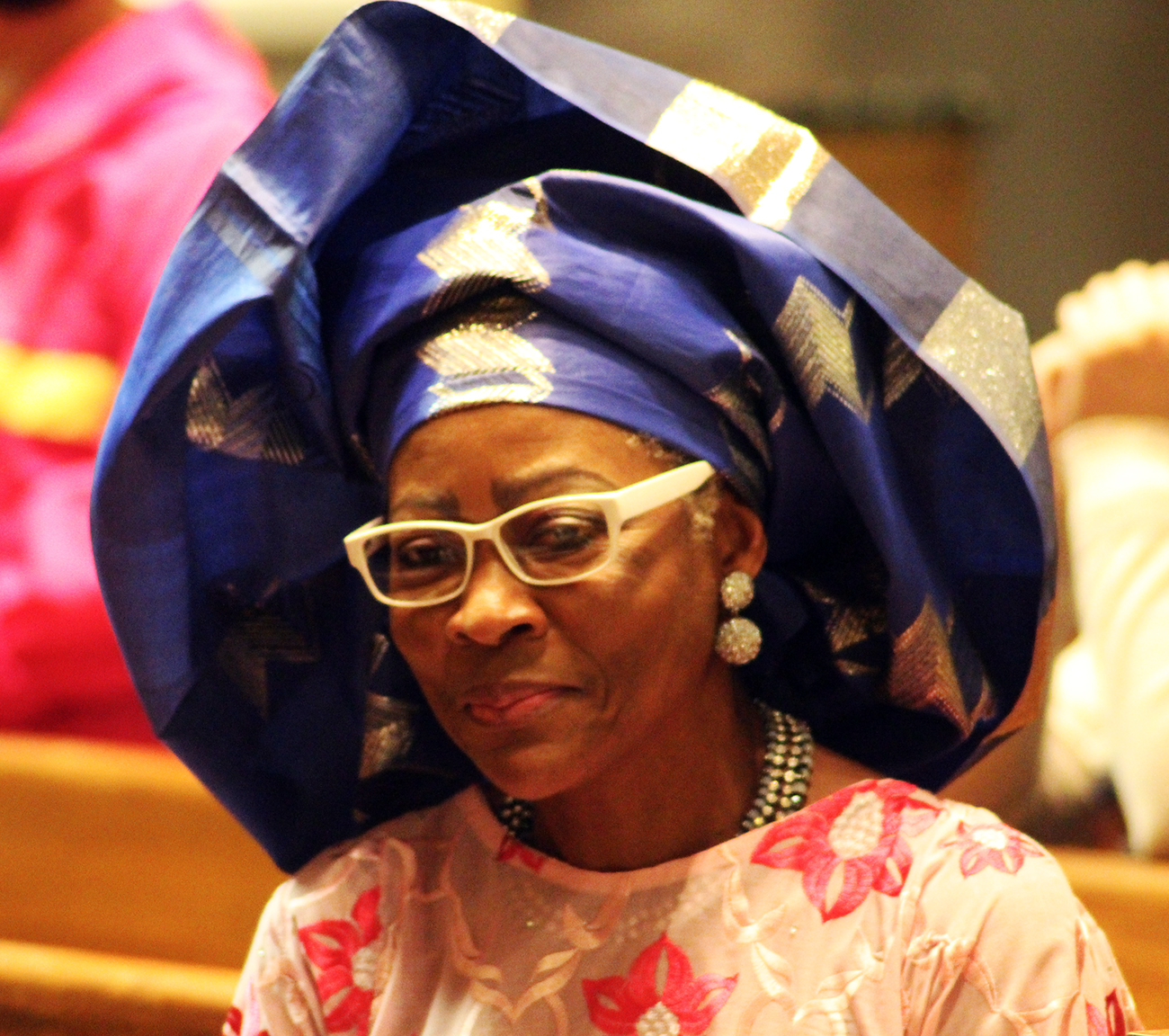 A congregant listens prayerfully during an Oct. 18 celebration of World Mission Sunday at the Cathedral Basilica of SS. Peter and Paul. (Gina Christian)

“We have people in our archdiocese who give to us monthly, and it’s $1 a week,” she said. “And I’m sure they’re old, because when I look back in the records, I see they’ve been doing it since the 1990s. And when you think about those people and you think about that the need that is there, that (commitment) is very, very real.”

Increasingly, the archdiocesan missions office has partnered with the archdiocesan Office for the Pastoral Care of Migrants and Refugees, whose director, Religious of the Assumption Sister Gertrude Borres, was also on hand at the Oct. 18 Mass.

With immigrants revitalizing many parish communities, said Meiers, “those countries that used to be missions are now missioning to us.”

That dynamic is part of the divine plan, said Dosse Akpeko, who represented the archdiocese’s French-speaking African communities at the liturgy.

“Diversity and a multicultural environment is always good,” he said. “It shows how marvelously God has really created (us), with all of us coming from different nations, together as one.”

Dressed in her native Lithuanian costume, Erika Gedvilaite said it was “a great honor to show (her) culture,” adding she appreciated that “the entire church recognizes” varied heritages.

Hermie Aczon said her Filipino roots blended with the backgrounds of other believers to form a lasting unity.

“We pray together as one body,” she said.

Fellow Filipino Ferdinand Aczon said added that “all of us are migrants” on a planet “which is a global mission.”

For that reason, said Meiers, faithful don’t need to travel far to find their own mission field.

“It doesn’t mean that everyone’s going off to a different country,” she said. “But you can show kindness to another, who may be new at school, or you could sacrifice something once a week and give the money to the missions, or say a daily prayer for missionaries.”

Regardless of the form it takes, evangelization is central to the life of a Christian, said Msgr. Rodgers.

“By reason of our baptism, we are called to proclaim the reality of Jesus Christ in every aspect of our lives,” said Msgr. Rodgers. “We are the ones who, whether in the office or the school, in the family, among friends, in the neighborhood … are called now to bring that message of Jesus Christ … to all we meet.”

NEXT: Bible Novena invites prayer for vocations through videos