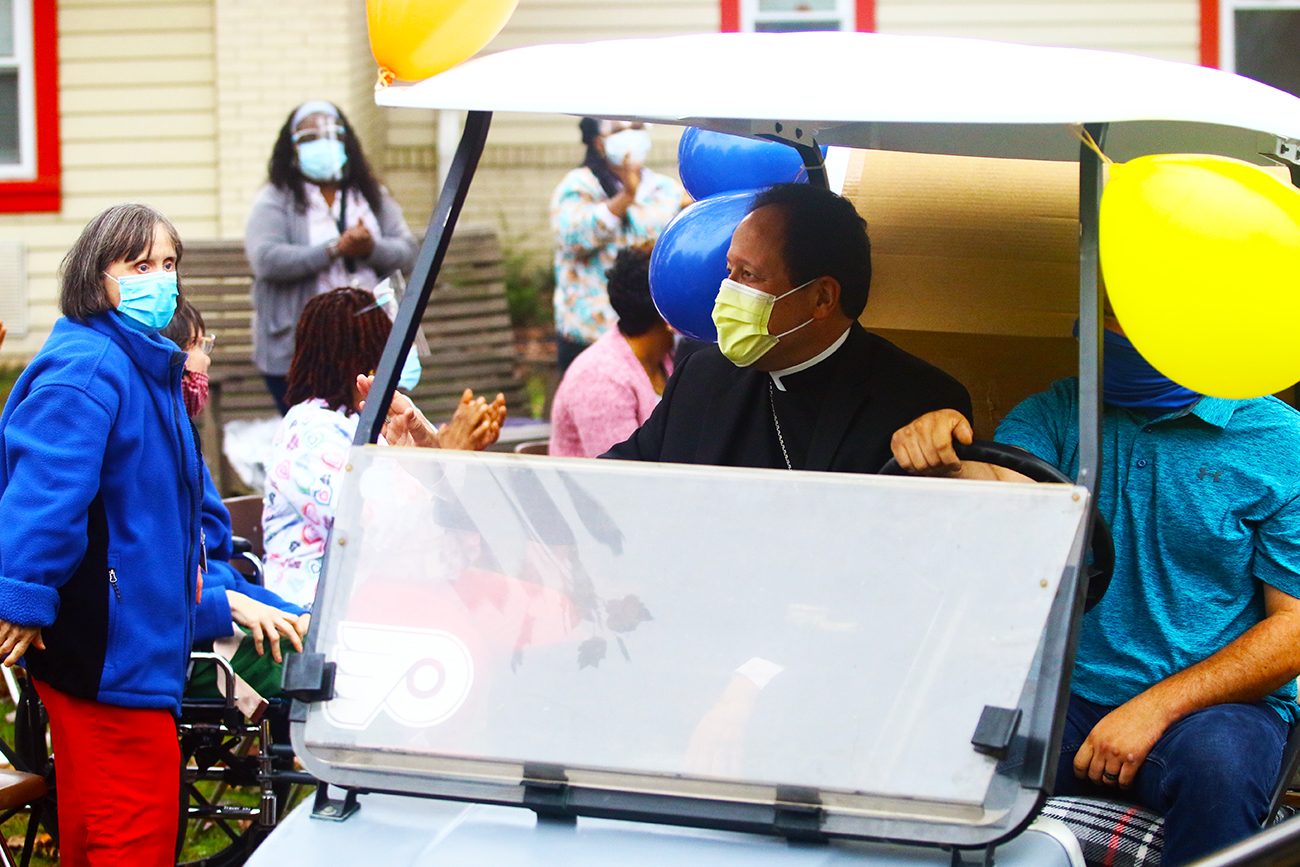 Philadelphia Auxiliary Bishop John McIntyre greets residents and staff of the archdiocesan Communities of Don Guanella and Divine Providence (DGDP) in Springfield, Delaware County. DGDP, an intermediate care facility for adults with intellectual disabilities, celebrated its 60th anniversary with an Oct. 22 Mass on the feast of patron saint Don Luigi Guanella, a pioneer in care for individuals with disabilities. (Photo by Sarah Webb)

An archdiocesan ministry for adults with intellectual disabilities has just marked its 60th anniversary with a feast day Mass in honor of its patron saint.

Philadelphia Auxiliary Bishop John McIntyre was the celebrant and homilist for the Oct. 22 liturgy at the Springfield, Delaware County campus chapel of the Communities of Don Guanella and Divine Providence (DGDP).

DGDP directly traces its roots to St. Luigi (also known as “Don” or “Father”) Guanella, a 19th-century Italian priest who dedicated his life to children with physical and intellectual disabilities.

A pioneer in pastoral and practical care for such marginalized groups, St. Luigi Guanella “put flesh on the bones of the faith … (making) it real and concrete for us,” said Bishop McIntyre in his homily, noting that the saint had, through prayer and persistence, overcome numerous obstacles along the way.

In Philadelphia, the saint’s vision began to take shape during the late 1940s and 1950s, when the Archdiocese invited Don Guanella’s religious orders — the sisters of the Daughters of St. Mary of Providence and the priests and brothers of the Servants of Charity — to establish facilities in the region.

The expansion of the mission over the years, along with more recent state initiatives to downsize large institutional care settings, has shaped the current structure of the communities, which have now transitioned to a community group home model. 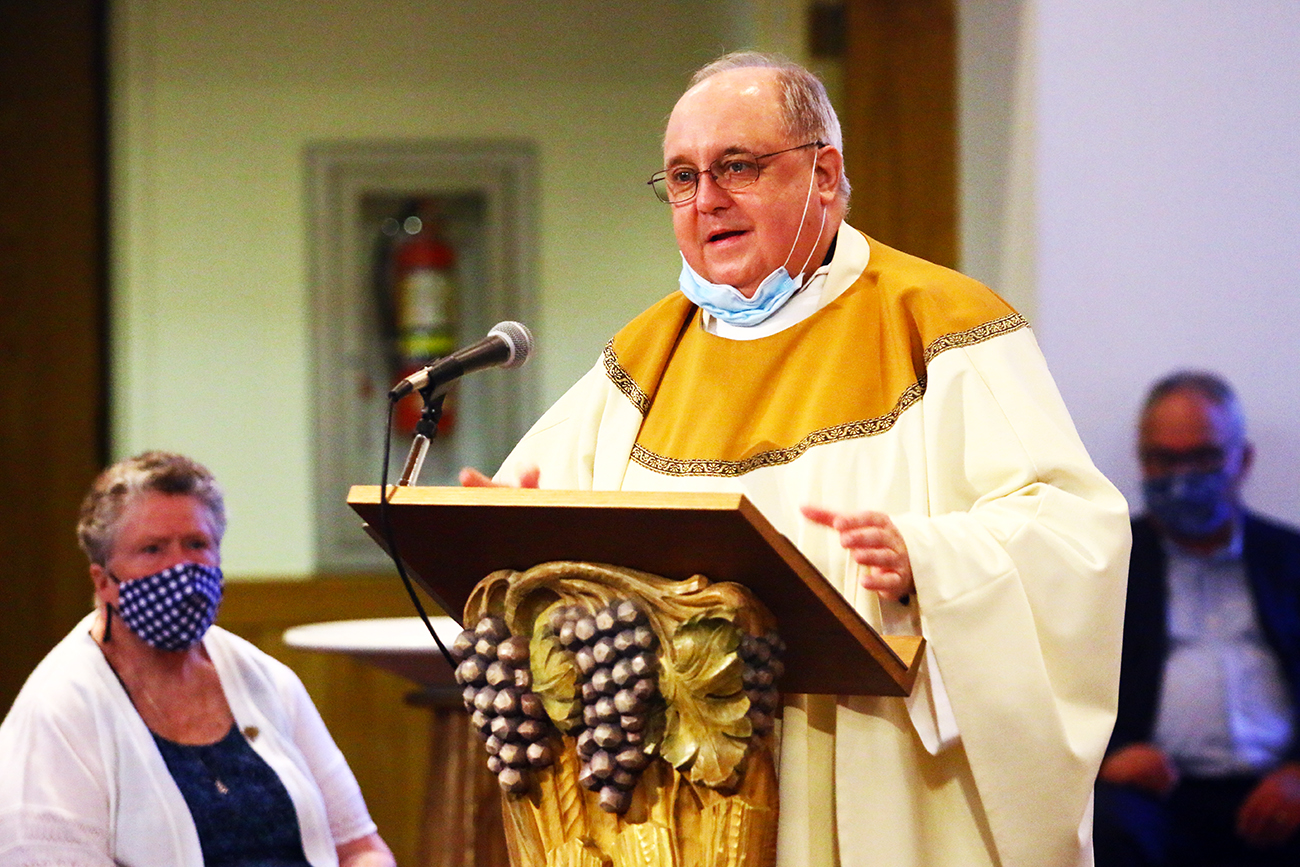 Servant of Charity Father Dennis Weber shares his reflections on his more than three decades of ministry at the archdiocesan Communities of Don Guanella and Divine Providence (DGDP) during an Oct. 22 Mass celebrating DGDP’s 60th anniversary. (Sarah Webb)

Throughout its history, DGDP has remained committed to its core “Guanellian values,” inspired by the life and work of its patron saint. These include respect for life, trust in divine providence, a preference for the poor, devotion to family and the Eucharist, and the Christian maxim that urges “in all things, charity.”

Servant of Charity Father Dennis Weber, DGDP’s director of ministry and mission, said that “Don Luigi had a pet name, if you will” for those he served.

“In Italian, he would call them i buoni figli, ‘the good children,’” said Father Weber. “And the reason he called them (that) was because he said they maintained their baptismal innocence, and that they were close to the heart of God.”

In his post-Communion remarks, Father Weber – who has been at DGDP for 31 years – said his office had a record book listing the names of every individual admitted to DGDP since its opening in 1960, including that of Jack (“Jackie”) Abbot, who has the longest continuous residency at the communities.

Writing in the anniversary celebration’s program booklet, Abbot recalled his entrance to then-Don Guanella School in 1961.

“I remember the times spent in the chapel and receiving my sacraments,” said Abbot, who prior to COVID was a regular server at DGDP’s Masses.

He fondly remembered former DGDP staff, and listed “playing sports, going to the movies and even selling Christmas things” among his favorite pasttimes over the years. 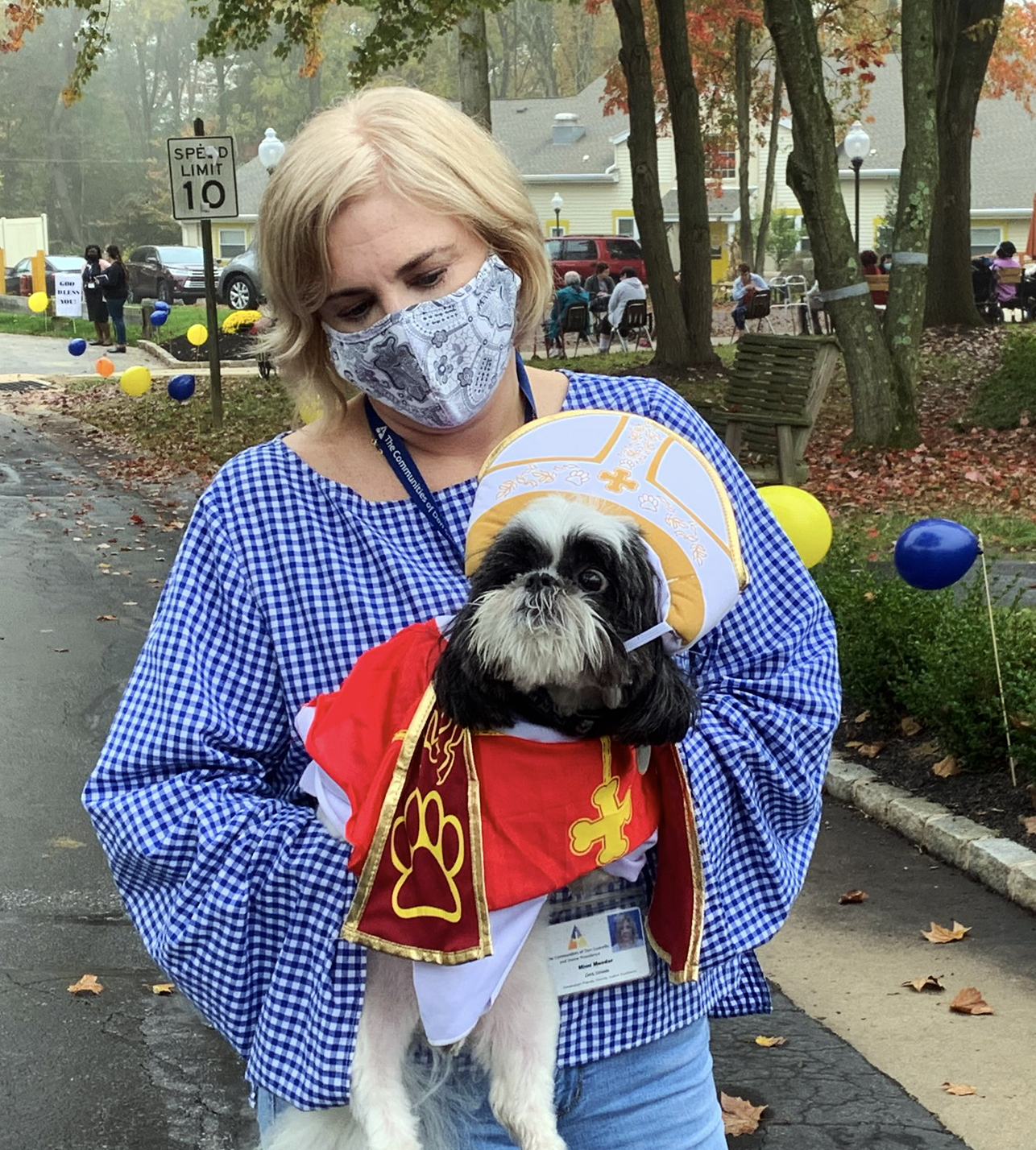 Due to COVID precautions, such activities have been scaled back or suspended, and Father Weber admitted that the anniversary celebration was “a bit bittersweet.”

While DGDP residents had filled the pews of previous feast day gatherings, attendance at the Oct. 22 Mass was limited to some two dozen who had completed temperature and symptom screenings, with most residents and staff viewing a livestream of the liturgy.

“We are missing, in the midst of this eucharistic celebration, those whom we dearly love,” said a visibly moved Father Weber. “But at the same time, they are definitely in our hearts.”

Assisting the bishop in his pastoral visit was DGDP’s beloved therapy dog, Boogs, who donned canine-sized liturgical vestments (including a mitre, chasuble and stole) for the occasion, instantly earning him the nickname “Bishop Boogs.”

Despite the pandemic restrictions and the day’s overcast weather, spirits were high at the anniversary event, something that didn’t at all surprise Divine Providence Village nursing director Angela Babcock.

“As much as the sadness of COVID has in some ways changed us, we’ve had beautiful moments that have brought us so much joy and grace,” she said. “You might be tired on your shift, and the residents would be dancing and singing in the halls, because they loved you and were happy you were here.”

Father Weber agreed, describing his three-plus decades at DGDP as “a mutual ministry.”

“As much as we think we’re giving, we’re receiving more in return,” he said. “I’ve often said that I can never expect to approach the unconditional love that our individuals have in their lives.”

NEXT: ‘Lord of miracles’ devotion takes on deeper meaning amid COVID