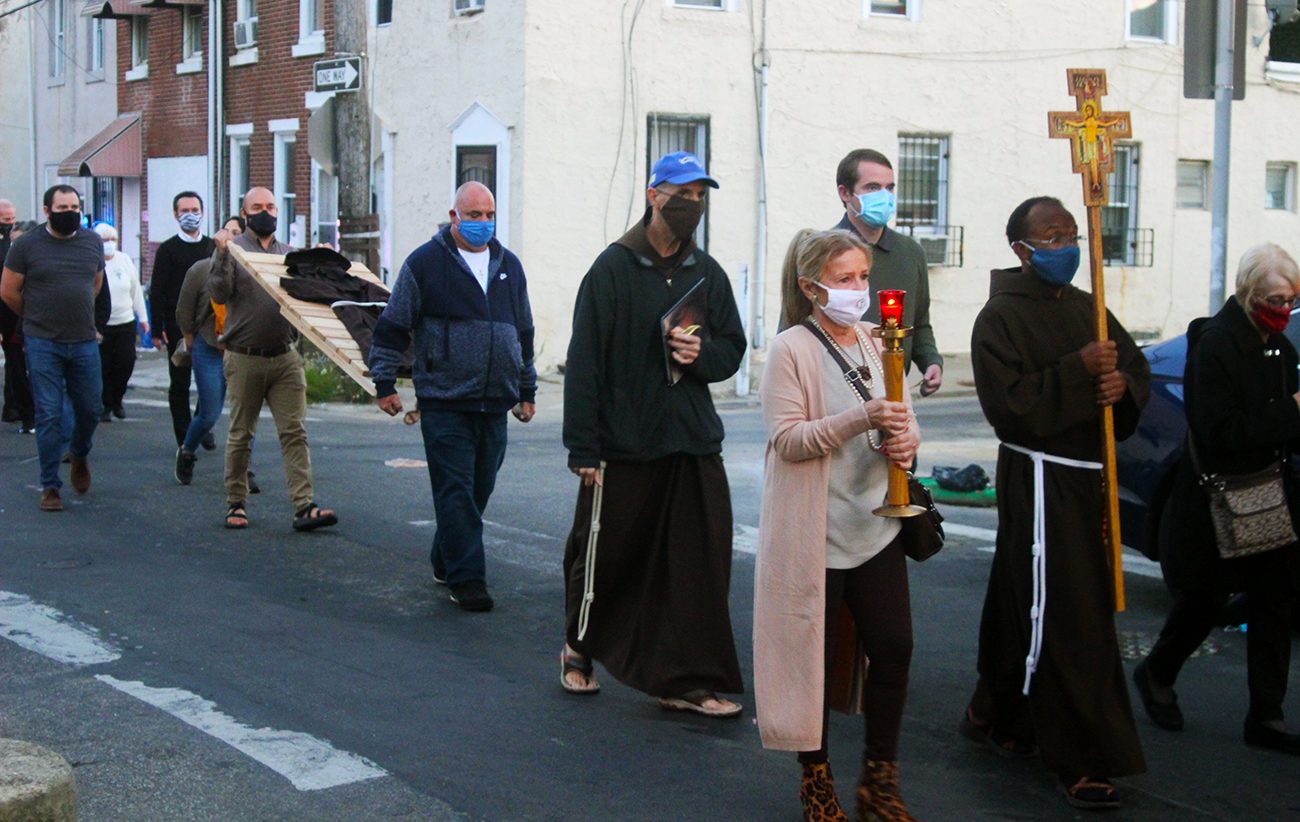 Capuchin friars, secular Franciscans and local faithful participate in an Oct. 3 procession through Philadelphia's Frankford section to mark the Transitus, or passing, of St. Francis of Assisi. Celebrated by Franciscan friars since the 13th century, the occasion is a prelude to the saint's Oct. 4 feast. (Photo by Gina Christian)

A medieval saint is making his influence felt in one of Philadelphia’s most challenged neighborhoods.

At dusk on Oct. 3, several Capuchin Franciscan Friars, members of the Secular Franciscan Order and local faithful processed through the streets of Frankford to mark the Transitus of St. Francis of Assisi.

Celebrated by Franciscan friars since the 13th century, the occasion recalls the saint’s death, hastened at age 44 by a life of severe mortification and the reception of the Stigmata, the five wounds of the crucified Christ.

Biographical accounts of St. Francis’ final words, along with Scripture, hymns and reflections, are also featured in Transitus commemorations, which precede the saint’s feast on Oct. 4.

As the elevated train roared overhead, participants in the Oct. 3 observance filed slowly down four blocks of Frankford Avenue behind a simple wooden bier containing a replica of the saint’s brown, hooded habit.

The solemn walk concluded with a prayer service at St. Joachim Church, a worship site of Holy Innocents Parish in Philadelphia. The church’s former buildings now house the Padre Pio Prayer Center, where the Capuchins are in residence. Through partnerships with archdiocesan Catholic Social Services, campus Catholic ministries and other nonprofits, the Capuchins provide outreach to the neighborhood’s vulnerable populations.

The center is also home to an active chapter of the Secular Franciscan Order, whose lay members – like the Capuchins and the Poor Clare Sisters – strive to emulate the spirituality of St. Francis, under the authority of the Holy See. 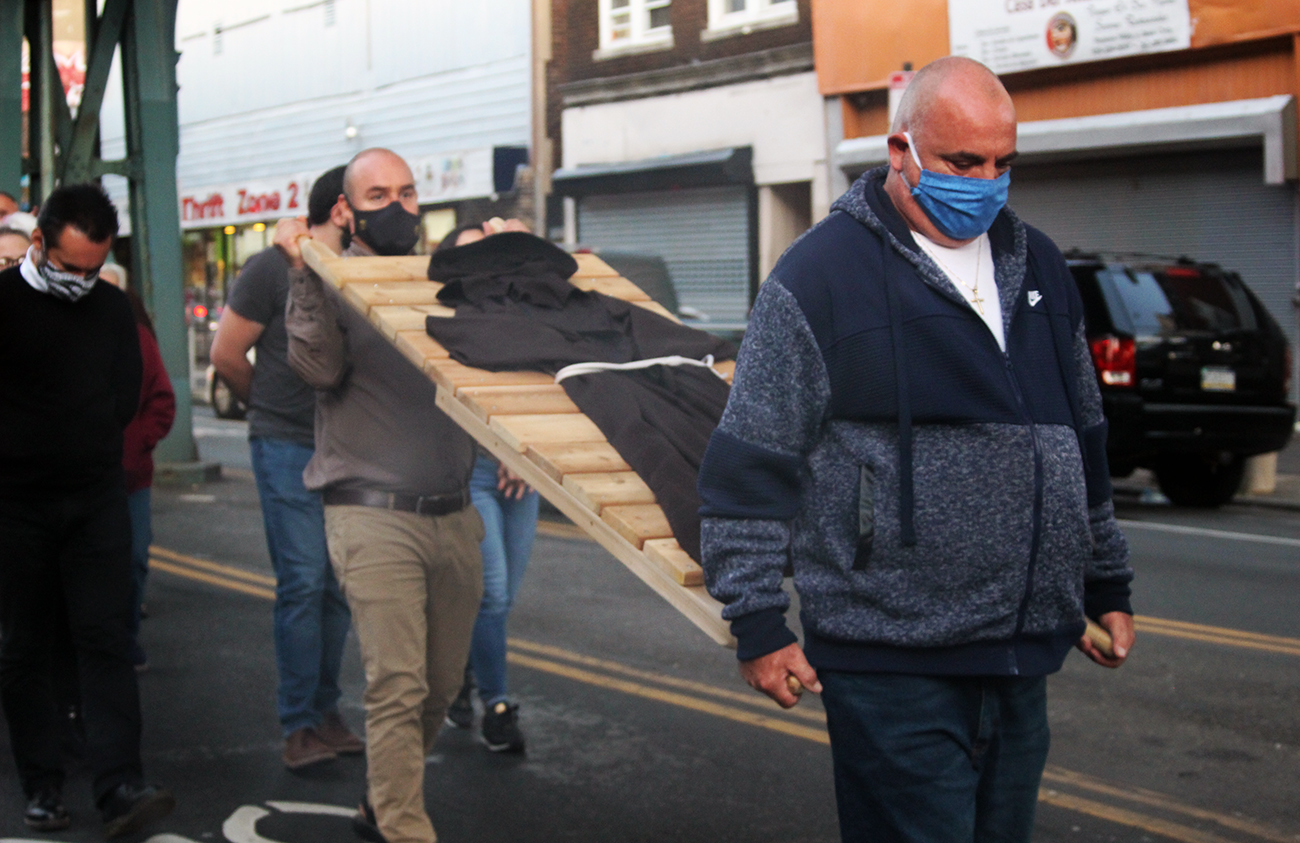 Participants in an Oct. 3 Transitus procession carry a bier with a replica of St. Francis of Assisi’s robe down Frankford Avenue in Philadelphia. The observance marks the saint’s death and serves as a prelude to his Oct. 4 feast. (Gina Christian)

Amid a neighborhood where COVID is the latest among pandemics such as addiction, violence and poverty, the Transitus was a time “to bear witness to the faith that we hold so deeply and treasure,” said Capuchin Friar Andrew McCarty of the Padre Pio Prayer Center.

“I think it has even more meaning here, especially in light of the number of people in a neighborhood like this who have had a family member or friend die,” he added. “They understand in an acute way the need to honor that passing.”

At the same time, said the friar, a profound embrace of Christ’s suffering and death ultimately made St. Francis a powerful witness to the Resurrection.

The saint, who patiently awaited what he called “Sister Death,” enables others to “see their passing as a change, but not as an end,” Brother McCarty said. “Our life continues, but in a different way with the Lord.”

St. Francis also “had such a way of just being present to those on the margins,” the friar added.

Devoted to a heroic poverty that contrasted starkly with his affluent upbringing, the saint sought out both leper and leader alike, preaching widely and traveling to Egypt in 1219 to evangelize Sultan al-Malik al Kamil during the Fifth Crusade. Although it did not result in the sultan’s conversion, the encounter has often been cited by Pope Francis as an example of the humility and dialogue required to foster community.

That sense of solidarity was in evidence on Oct. 3, as the Transitus procession began for the fourth consecutive year with an opening service at neighboring St. Mark Episcopal Church.

“There was a deacon at St. Mark’s who was a Third Order Franciscan with the Anglican order,” said Brother McCarty. “So it was a natural connection.”

Across denominations, Franciscan spirituality is characterized by a deep reverence for Christ’s incarnation and for God’s creation. 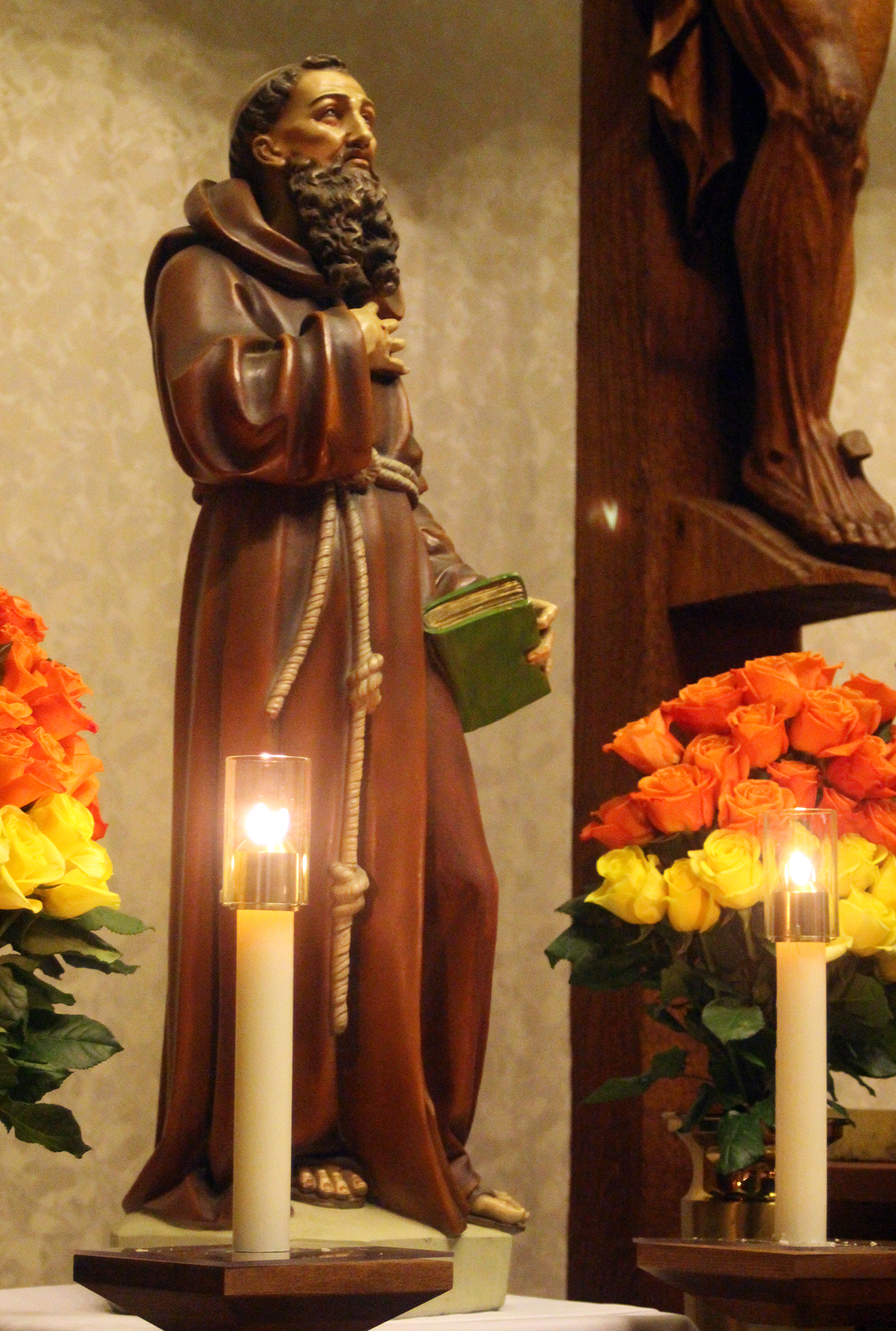 A statue of St. Francis of Assisi was on display in St. Joachim Church (part of Holy Innocents Parish in Philadelphia) during an Oct. 3 gathering to mark the Transitus, or passing, of the saint into eternal life in 1226. (Gina Christian)

Last month, Secular Franciscans from Catholic chapters throughout the Philadelphia area gathered in-person and online at the Padre Pio Prayer Center for a Sept. 14 day of reflection on the need for hope amid COVID and social unrest.

Secular Franciscan Carolyn Murray, minister of the center’s chapter, said the topic was inspired by a quote she’d come across.

“Someone asked me, ‘Where did hope go?’ and I said, ‘Where it’s always been – between faith and love,’” she recalled.

Presentations on the Sept. 14 tackled challenges such as racism, human trafficking, migration and ecology.

Capuchin Friar Rigo Azanwi — ordained as a priest Oct. 11 — offered a detailed overview of Pope Francis’ encyclical Laudato Si’, whose title is derived from St. Francis’ of Assisi’s “Canticle of the Creatures.” During his talk, Brother Azanwi traced the connections between environmental damage, economic inequality, racial injustice and societal breakdown, calling for a recognition that “every single creature speaks of the glory of God,” and a renewed commitment to “our unity as humans.”

The procession served to “stir up some questions in people’s minds and hearts,” he said. “Maybe they’ll want to learn a little more about who are and who Francis is.”

Kyra Malamood of St. John the Evangelist Parish in Philadelphia agreed, noting that “it’s a reminder in this grim time that for us believers, we know that death is not the end; it is new life.”

“It’s easy to see the world and what’s going on and be dismayed,” said Koons. “But when you really look at death through the eyes of Jesus, it loses its power over us.”