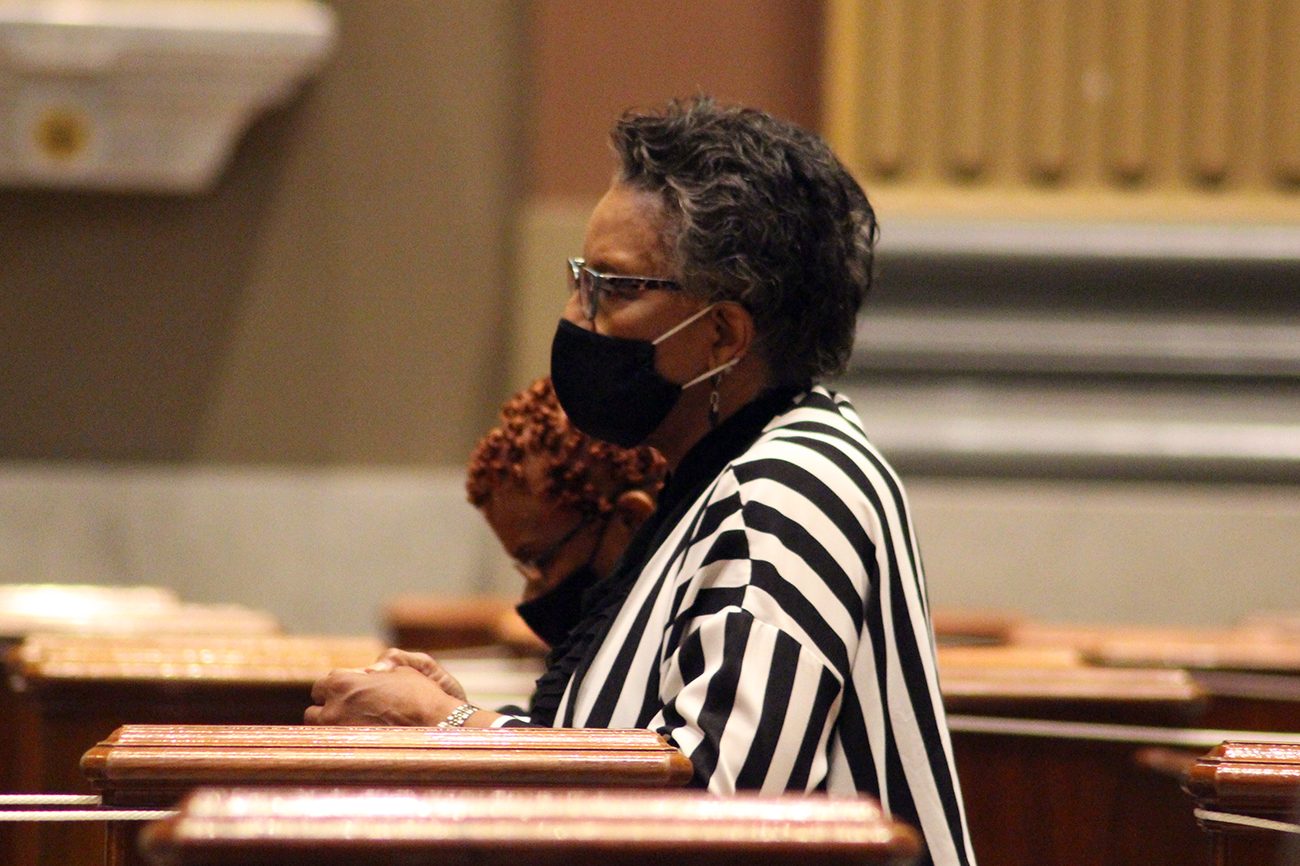 A woman prays during a four-hour vigil for nationwide peace and healing, held Oct. 10 at the Cathedral Basilica of SS. Peter and Paul. (Photo by Gina Christian)

As COVID, racial inequality and a contentious election dominate the headlines, archdiocesan faithful united in prayer this past weekend.

On Oct. 10, the Cathedral Basilica of SS. Peter and Paul hosted a “Eucharistic Day of Prayer for Healing and Peace in Our City and Nation.” After the regular 12:05 p.m. Mass, some 200 faithful — lay and religious — knelt before the Blessed Sacrament over the course of the afternoon, reciting a rosary each hour for specific intentions.

The event followed a national “Rosary for America” led via YouTube Oct. 7 by  Los Angeles Archbishop José H. Gomez, president of the U.S. bishops’ conference, and bishops throughout the nation.

The Nepomuceno family of St. Mathias Parish in Bala Cynwyd led the first hour of Saturday’s vigil, during which the Joyful Mysteries were offered for an end to violence in area neighborhoods.

Across the nation, homicide rates have risen, with a preliminary FBI report indicating a 14.8% increase during the first six months of 2020. Philadelphia has just recorded a total of 371 homicides, already surpassing last year’s 356.

The prayer vigil’s second hour, dedicated to ending family and community divisions, was headed up by four of the archdiocesan area’s Tolton Ambassadors. Commissioned in 2017 by Chicago Auxiliary Bishop Joseph Perry, the group works to promote the canonization cause for Father Augustus Tolton, the first Roman Catholic priest in the U.S. known to be Black. 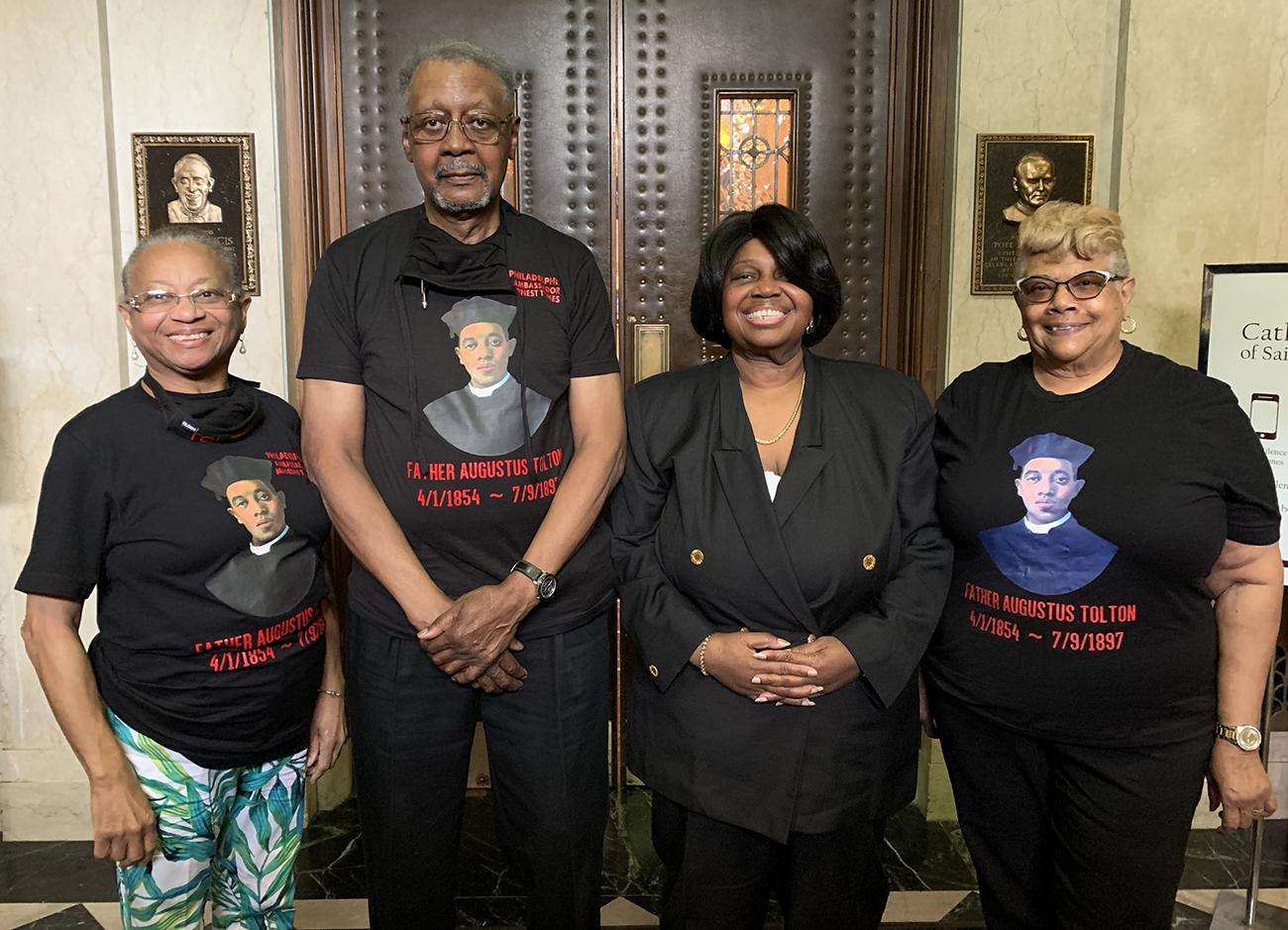 Members of the Tolton Ambassadors, who help promote the canonization cause of Black priest Father Augustus Tolton, led a holy hour during an Oct. 10 vigil for peace at the Cathedral Basilica of SS. Peter and Paul. Pictured left to right are Madeline Tymes, Ernest Tymes, Cynthia Brown and Verna Cox. (Gina Christian)

Tolton deeply “believed in the rosary and believed in the Eucharist,” said ambassador Madeline Tymes, a parishioner of St. Charles Borromeo in South Philadelphia.

Tymes led several decades of the Sorrowful Mysteries with her husband Ernest, who said Tolton’s “zeal and perseverance” make him a vital role model for Christian life.

Fellow Tolton Ambassadors and rosary leaders Verna Cox and Cynthia Brown agreed, with Cox noting that she felt it was “important to follow in the footsteps of Father Tolton.”

Brown said the gathering showed that “we’re not segmented; we’re one universal church.”

The afternooon’s third hour, led by local Sisters of Life, focused on the protection of human life, marriage and the family. Young adult parishioners of the Cathedral rounded out the vigil with a rosary for a nationwide outpouring of reconciliation.

Reciting all four sets of mysteries was an “intensified and powerful response” to current crises, said Meghan Cokeley, director of the archdiocesan Office for the New Evangelization. 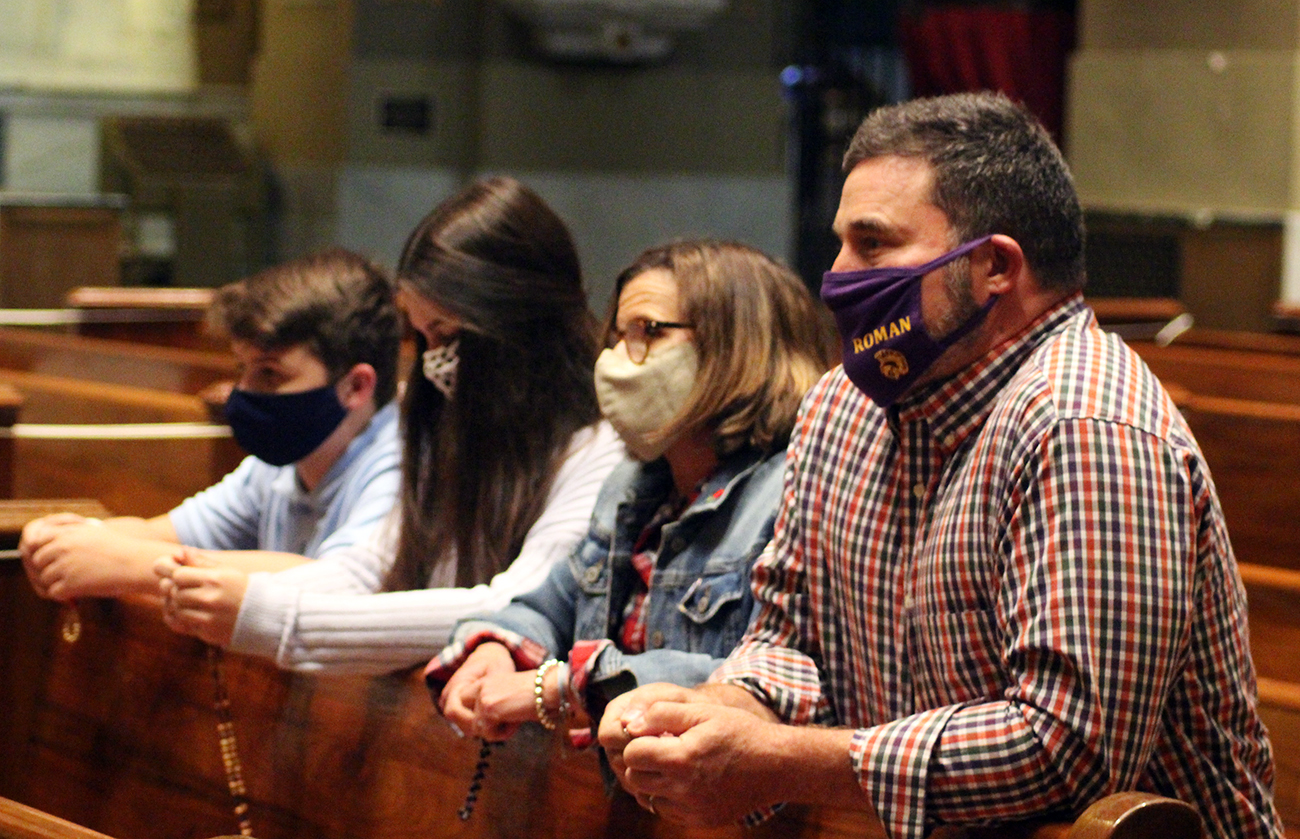 The Miller family (l-r: Charlie, Ava, Sarah and Gary) of St. Philip Neri Parish in Lafayette Hill joined in prayer as part of an Oct. 10 vigil for peace at the Cathedral Basilica of SS. Peter and Paul. (Gina Christian)

“The things for which we are praying – an end to violence, deliverance from the culture of death – are in a sense ‘high-powered’ evils that have grown steadily in our culture over a long period of time,” she said.

The “multiple hours of prayer” were a way of “laying the axe to the root of these things,” she added.

Equally important were the silences between rosaries, said Father Dennis Gill, director of the archdiocesan Office for Divine Worship and the rector of the Cathedral.

“We really need to come before him, spend time with him and be in communion with him,” said Father Gill. “People just need the opportunity to sit for a little bit and kneel before the Lord to pray.”

Gary and Sarah Miller of St. Philip Neri Parish in Lafayette Hill welcomed the chance to join in prayer with children Ava and Charlie.

“Can you see the smile behind my face mask?” Gary asked just before the first rosary began.

PREVIOUS: Priest, police light up the night for sick kids

NEXT: St. Francis of Assisi brings hope, healing to Frankford