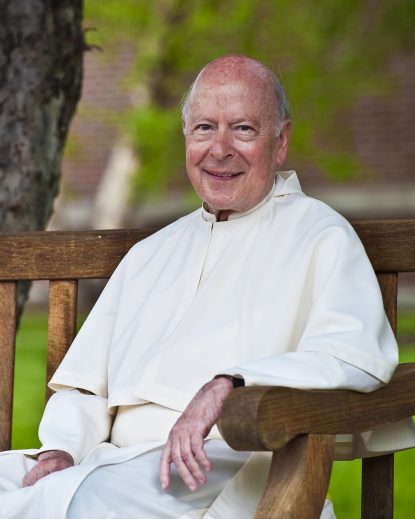 Father Alfred McBride, a member of the Norbertine Community of St. Norbert Abbey, is pictured in this 2011 file photo. Father McBride died Oct. 23, 2020. He was 91. (CNS photo/Sam Lucero, The Compass)

DE PERE, Wis. (CNS) — Norbertine Father Alfred Aloysius McBride, who was nationally known as a leader in education and catechetics, died Oct. 23 at age 91. He was a member of the Norbertine Community of St. Norbert Abbey in De Pere.

After his death, the Norbertine Community thanked the nurses at the abbey “and everyone at Unity Hospice who cared for Father McBride.”

In a 2014 interview with The Compass, newspaper of the Diocese of Green Bay, which includes De Pere, Father McBride said he was able to both look back over many changes in the church and forward to the future.

The secret, he said, in reflecting on his 60th jubilee in 2013, was love: “I was attracted to the teaching of Jesus that I should not just love him, but accept the love he offers me. … The people who gathered round me at my jubilee came with the affection of years. … That is the beauty of the Christian contract. Such love is free and never taxed.”

Father McBride was born in Philadelphia Dec. 12, 1928, to the late Charles and Mary (Shannon) McBride and raised by his aunt, Mary Courtney, whom he regarded as his mother. He felt a call to the priesthood early in his life at his home parish of St. Patrick in central Philadelphia.

He entered the Norbertine Order and was vested as a novice Aug. 28, 1946. Two years later, he professed simple vows and began teaching English and Latin at St. Norbert High School in De Pere. In 1950, he received a bachelor’s degree in philosophy from St. Norbert College.

Father McBride professed solemn vows Aug. 28, 1951, and was ordained to the priesthood June 20, 1953. He was appointed associate pastor of St. Joseph Parish in De Pere while continuing to teach at the high school. In 1958, he was asked to be celebrant of the Mass on WBAY-AM/FM radio, which he did for seven years.

When the new St. Norbert Abbey was built in 1959, Father McBride became the first novice master. He was sent to Brussels, Belgium, in June 1963 and obtained a diploma in catechetics from the Lumen Vitae Institute. He earned a doctorate in religious education from The Catholic University of America in Washington in 1972.

Father McBride was the founder and executive director of the department of religious education at the National Catholic Educational Association from 1972 to 1979. He received the NCEA Board Award for distinguished service.

In 1983, Father McBride traveled to New Mexico and at the invitation of the archbishop of Santa Fe became the president of the University of Albuquerque, a small Catholic institution founded in 1950 by the Franciscan Sisters of Colorado Springs, Colorado. After his fourth year there, the decision was made to close the school, because of its financial woes.

Upon receiving an invitation to Washington from the U.S. Catholic bishops, he was appointed to write the catechesis in preparation for the second pastoral visit to the United States of St. John Paul II in 1987 and also to be a special representative to the media during that visit.

Father McBride later served as consultant to the Archdiocese of Boston for the implementation of the Catechism of the Catholic Church and was a professor of homiletics and catechetics for nine years at Pope St. John XXIII National Seminary in Weston, Massachusetts.

In 1992, Father McBride became the spiritual director for the U.S. branch of Aid to the Church in Need, which was founded by Norbertine Father Werenfried Van Straaten after World War II to provide food, clothing and the sacraments for the thousands of refugees who fled west from the countries behind the Iron Curtain.

Father McBride celebrated his golden jubilee as a priest in 1983 and decided to return home to De Pere, which is in the Diocese of Green Bay, Wisconsin.

In 2015 and 2016, Father McBride was a columnist for The Compass, Green Bay’s diocesan newspaper. He lectured and wrote dozens of articles and 68 books.

His book “All I Own I Owe,” takes readers on a journey from his birth to Irish immigrant parents and his childhood in the Irish community of Philadelphia’s Center City District, to his education and early vocation as a seminarian, through the changes of the Second Vatican Council and the church’s increased focus on religious education for both children and adults.

Also among his books were several volumes of meditation and commentary on various books of the Gospel that were published by Our Sunday Visitor in Huntington, Indiana. His 1994 book “Essentials of the Faith: A Guide to the Catechism of the Catholic Church” and 1996’s “Father McBride’s Teen Catechism” also were published by OSV.

He was awarded an honorary doctorate by both St. Norbert College in De Pere and Belmont Abbey College in Belmont, North Carolina.

NEXT: Alex Trebek dies at 80; host of ‘Jeopardy!’ was educated in Catholic schools