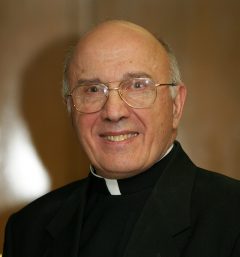 Redemptorist Father Anthony Russo, a longtime leader in the Deaf Apostolate in the Archdiocese of Philadelphia, died March 31 from complications of cancer while in hospice care in Timonium, Maryland. He was 86.

He was born in Passaic, New Jersey, son of the late Fausto and Yolanda (De Capite) Russo. After attending Clifton Public School No. 8, Clifton High School and Virginia Military Institute where he received a degree in civil engineering, he entered the Redemptorist order.

After his second novitiate at Annapolis, Md. in 1967 he was assigned to St. Boniface Parish in Philadelphia until it closed in 2006. He then moved to nearby Visitation B.V.M. Parish in the city’s Kensington section.

Also in 1967 he began his ministry as coordinator of the Deaf Apostolate in the Archdiocese of Philadelphia until 2012 when he retired.

In those 45 years until his retirement, Father Russo served the Catholic Deaf community with fervor and love. Celebrating Mass and the sacraments, leading Bible study and retreats, offering pastoral care and hospital visits, TTY calls and VP calls filled his days but he always had time for prayer before the Blessed Sacrament and the praying of the Divine Office.

Father Russo was also the moderator of International Catholic Deaf Association, Chapter 8 for many years.

During the years of his active ministry and in retirement, Father Russo was also a spiritual director to many Deaf and hearing devotees who sought out his wisdom and counsel.

He wrote three books, “Made by Hand, A Catechesis for the Deaf;” “Creation, The God of the Deaf Adolescent: An Inside View;” and “In Silent Prayer, A History of Ministry with the Deaf Community in the Archdiocese of Philadelphia.”

The funeral Mass will be celebrated Nov. 7 at 10:30 a.m. at St. Peter the Apostle Church and the National Shrine of St. John Neumann, 1019 N. 5th Street, Philadelphia. This Mass will be interpreted in ASL. Those attending are asked to wear facemasks. The upper church is large and makes social distancing manageable. The Mass will be livestreamed at www.facebook.com/StJohnNeumannShrine.

The celebrant and homilist for the Mass will be Bishop Bruce Lewandowski, C.Ss.R. Interment will follow at Most Holy Redeemer Cemetery, Philadelphia.

In addition to his parents, Father Russo is predeceased by his sister, Janet.