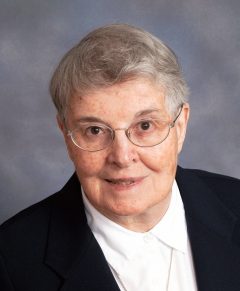 Sister Miriam Irene Keenan, I.H.M., died Aug. 25 in Camilla Hall, Malvern at age 87 and in the 69th year of her religious life.

Lillian Keenan was the daughter of John and Mary (Antonelli) Keenan of St. Gabriel Parish in Philadelphia. She Lillian graduated from West Catholic Girls’ High in 1951 and entered the Sisters, Servants of the Immaculate Heart of Mary that September.

She received her habit and her religious name, Sister Miriam Irene, on March 10, 1952 and professed first vows on March 11, 1954. She would go on to earn degrees from Immaculata University and St. Charles Borromeo Seminary.

From 1997 to 2003, Sister Miriam resided at St. Theresa of the Child Jesus Convent in Hellertown, Pa., where her teaching efforts centered on those studying Catholic faith via the RCIA Program in the parish.

In August 2003 Sister Miriam ministered to all at Camilla Hall in the Apostolate of Prayer until her death in August 2020.

Due to strict regulations during this time of the COVID-19 pandemic, the funeral Mass was celebrated privately on Aug. 31 with private interment. Father Michael J. Gerlach was the celebrant and homilist for the Mass.

Sister Miriam Irene is predeceased by her parents John and Mary (Antonelli) Keenan, her brother John and her sisters Mary (Primo) and Nancy (McLaughlin).  She is survived by her sisters Jean Longo and Irene Tulli, and many loving nieces, nephews and her congregation of I.H.M. sisters.