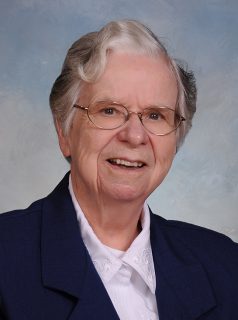 Sister Eileen Walsh, O.S.F. (formerly Sister Patrick Mary), died Sept. 20 in Assisi House, Aston on Sept. 20. She had been a professed member of the Sisters of St. Francis of Philadelphia for 62 years.

She was born in Philadelphia where she was a member of St. Francis Xavier Parish and a graduate of John W. Hallahan High School. She entered the congregation in 1956 and professed her first vows in 1958.

She earned a BA in English from Neumann University in 1971. She later studied at Villanova University where she earned an MA in counseling in 1990. She ministered primarily in education and social work.

Sister Eileen ministered for 46 years in the Archdiocese of Philadelphia. She taught at St. Elizabeth School in Philadelphia, SS. Colman-St. John Neumann School in Bryn Mawr, and Neumann University.

At Nativity B.V.M. School in Media she served as principal.

She also ministered in social services at Shalom, Inc. for nine years, as facilities coordinator at the Franciscan Spiritual Center in Aston for 14 years and as a volunteer at Anna’s Place in Chester for four years. In 2016 she moved to Assisi House where she served in prayer and hospitality ministry until her death.

All services were held in Assisi House on Sept. 24 and were private. Burial was in Our Lady of Angels Cemetery in Aston.

Sister Eileen is survived by her many nieces and nephews, grandnieces and grandnephews, and by her Franciscan family. Donations in her name can be made to the Sisters of St. Francis Foundation, 609 S. Convent Road, Aston, PA 19014.